To Market, To Market

Twelve reactions to my latest nonfiction work:
• “[This] made me quite teary. [I]t’s a beautiful [story], and very nicely told”
• “A great conversation piece, and I think boys would particularly like it”
• “I have to say, I think the story is fantastic”
• “Not only is [the] story an interesting, little-known slice of history, but the writing is quite lovely as well”
• “We all had very positive reactions to it overall. What we all really loved, and what I am sure appeals to you, is that it is a war story but it’s one about reconciliation. That’s really both a lovely and unusual notion”
• “I have read the story several times, and it is an unusual one with lots of good themes and excitement”
• “[A] lovely paean to peace coming out of war”
• “I was very moved”
• “Compelling and well told”
• “I was fascinated by this story of forgiveness and redemption. It’s so touching!”
• “Haunting”
• “There’s no question this has some compelling marketing hooks—and it’s a pretty unbelievable story in the first place”

I would be proud to say that these twelve comments were reactions to MY latest nonfiction work. But this is actually the way that Marc Tyler Nobleman started off a very thought-provoking post at his own blog. 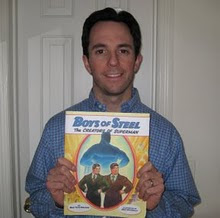 A little later in the piece, he revealed that each reaction came from a children’s book editor—who was rejecting his manuscript. It wasn’t that they were afraid to take a chance on a newcomer; Nobleman has written many, many books including the highly lauded Boys of Steel: The Creators of Superman. So, why? Doubtless many reasons, but he was often told that nonfiction—especially nonfiction about someone who is not a household name—doesn’t sell.

Okay, it’s no news that the economy is in trouble and if that weren’t affecting publishing, the changes in technology still would be. No news at all. But Nobleman's post isn’t whining about it. Instead he created his own news—and hopefully a bit of buzz to pitch and call attention to the story he loves and wants to tell in print. 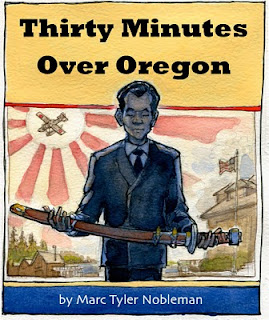 He turned to illustrators—some kids, some old pros with hundreds of books among them. He asked them to create covers for his book. There are twelve on his blog (interestingly, the same number as listed rejections). You can go to the link below to see them all. Since I’m just picking one to share here, I'm loyally going for the cover by Tim Bush, who illustrated my own All in Just One Cookie.

I'll let Marc tell the rest of his own story at the link below. But at the end, he closes with two questions:

Librarians: Is this a book you can see adding to your collection?

Editors: Is this a book you can see?

For me, Marc’s post, http://noblemania.blogspot.com/2011/09/picture-book-for-sale.html, also raises many more:

What about the stories that need to be told precisely because they are about people, who aren't household names but perhaps should be because they came out of mist to be heroes or do the decent thing? People like, say, you or me or the kid that is reading the book?

What is the author’s changing role in these crazy transitional times? First it was just creator; now our roles are equal parts promoters and “publisizers.” The Internet also gives Marc and all of us a platform for another additional role. But what is that role and what will it entail?

And, what will happen when the iPad (RIP Steve Jobs) and its equivalents make illustrated books a realistic digital commodity; how will that shift the roles of publishers and authors even more? What are some of the best case scenarios?

Come on guys, do we have a shot at a discussion here?
Posted by Susan E. Goodman at 5:11 AM

Sadly, publishers seem terribly confused by the "New Media" and have pulled their necks in even farther than usual--and they were never stuck out all that far to begin with. Seems that authors, especially of books the publishers are most afraid of, need to organize around teaching editors that huge profits aren't their only concern. Reading is in the public interest and editors and houses need to understand they have a responsibility to contribute to that public interest.

As a teacher-educator and former elementary school teacher, I am horrified by the lack of new and interesting nonfiction for kids. At a time when we educators are being pressed to teach more nonfiction due to Common Core Standards, it doesn't seem to make sense not to provide this material. Kids not only like it, they need it.

Thanks for your comments; I totally agree with both of them. It's so ironic, Myra, that the Common Core Standards are pushing nonfiction just at the time when trade publishers are more reluctant to buy it. I know that school and library sales are in trouble, but nevertheless this changing emphasis in teaching (and testing) seems like a marketing opportunity. Even more ironic, by all accounts, this is the Golden Age of children's nonfiction.

Thank you for covering this topic, Susan, and thank you to Matt and Myra for your spot-on comments. My goal in posting the mock covers experiment was to emphasize not only the need for more (and unconventional) nonfiction but also the need for authors to take chances in promoting it!

It seems to me, Susan, that everyone is watching, waiting, and worrying about where this will all go. Which says that there is an opportunity for authors to seize leadership and visionary opportunities. Take charge from the ground up. We need to show teachers and parents and publishers how amazing nonfiction can be - perhaps by leading the way with new technologies that revolutionize their thinking. I think editors would be grateful but I'm not sure how one gets the message out. My daughter has been learning American History on a library "Playaway" that has a screen but uses nonfiction books to teach the facts. Love it. Maybe we need to consult with young folks who've never lived without this technology to get the attention for nonfiction that it deserves.

I agree with both Ms. Zarnowski about her horror with the extrodinarily limited buying and backing that publishing houses give to childrens non-fiction. It simply flies inthe face of all reason in this day and age.

I also agree with Ms. Robinson's suggestion that editors look toward kids to see what technology they're using in order to *create* non fiction that they can relate to. But I wish I could believe they'll do it but I don't. I think it'll take a new generation of editors who will realize that the previous generation completely dropped the ball. And we will be a country worse off because of that drop.

Huge profits are not the only concern of editors. No one becomes an editor to get rich. We become editors because we love books. Editors have to be concerned with profits because they want to remain employed. And the only way to do that is to sell books... so yes, publishers are being conservative with their lists. But good stories deserve to be told, and should be told... we need authors like you all to keep hammering at it, and coming up with good stories, because we can't think of everything. Tell an editor how your story relates to the market, to current events, how it will sell, who will buy it... they'll listen. Don't give up, eventually someone will bite.

Thanks rglaser. I have been doing just that! Let's see what develops now...