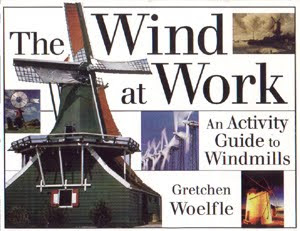 In 1995 I wrote my first book The Wind At Work, a history of windmills, and sent it to Chicago Review Press. They liked it, but replied that all their children’s books include activities. Would I be willing to write some? Would I!

Researching way back then

All this took place back in the Dark Ages, AKA pre–internet.

To research the book I read books and more books, using local and university libraries, interlibrary loans, and used bookstores. I traveled to the Netherlands, the American Midwest, and a wind turbine factory. To find photographs, paintings, etchings, and the like I searched through books. I visited and/or wrote to historical societies, the Library of Congress, tourist sites, and libraries. I received originals and photocopies and then sent purchase and permission letters, all by snail mail. And finally I sent off packages of photographs, slides, drawings, etc. to the publisher, all printed on paper!

In those pre-free-long-distance-phone-plan days, I spent a small fortune on long distance telephone calls interviewing windmill people, and trying to locate the addresses and phone numbers of restored windmills in towns all around the US and Canada, for the appendix "Where to Find Windmills."

Then in 1997, it all came together in The Wind at Work: An Activity Guide to Windmills. Like my first love, this book holds a special place in my heart. Yes, I went on to others, leaving it behind, making longer commitments, but the memory of my first kiss on my name on my book lingers on…..

Sidebar: The Wind at Work has stayed in print for nearly fifteen years. Let’s put our hands together for small presses in general, and Chicago Review Press in particular. I visited their offices in 1997 and again this summer. They have expanded from one floor to an entire building in downtown Chicago, and are doing very well, thank you. I plan to interview CRP publisher, Cynthia Sherry, in a future blog. 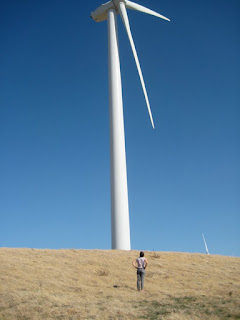 I’d been thinking of doing an updated version of The Wind at Work for a while, for the section on wind turbines was woefully out of date. Last spring, following the earthquake and nuclear disaster in Japan, I emailed Cynthia and….. the warehouse was low on stock. Could I do a new edition for 2012 publication? Could I!

I spent the summer reading, visiting wind farms, interviewing people, and searching for new photos, graphs, and charts. But I neither sent not received one letter by snail mail, visited no libraries, and read not one book. I did 100% of my research online. Why? Because that’s where the information lives.

I browsed the 2007 Intergovernmental Panel on Climate Change Report that won the Nobel prize; material from American, Canadian, and Europeans Wind Energy Associations, Global Wind Energy Council, American Lung Association, U.S. Department of Energy, National Renewable Energy Laboratory, Audubon Society, and many more sources. I watched videos and read reports, scientific studies, congressional hearing statements, newspaper stories from around the world, and more – all at my computer. I’ve created some new activities for the new book. These and some of the old activities also use internet resources. 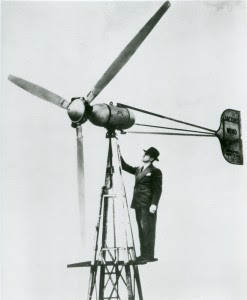 As for new illustrations – all online. Not only contemporary material, but historical photos as well.Since I wrote the first book, Steve Jacobs a scion of the Jacobs Wind Electric Company, found photos as far back as the 1920s and put them on their website, and on Flickr. A piece of history I could only describe in words in 1997, I can illustrate in 2012. As for “Where to Find Windmills,” I didn’t make one phone call, I just googled them all.

Sidebar: As I began my photo research, I unearthed old paper files from a box in a closet and found the manila folder marked “picture permissions.” With trembling hands, I plucked a letter from dozens nestled there. I let out a huge Hallelujah when I saw the words “I hereby grant Gretchen Woelfle…. license to reproduce in all editions of the book…” Those six precious words saved me weeks of work. I sent a silent blessing to the forgotten hero who helped me compose that permission letter back in 1997.

As I worked on the new The Wind at Work, I wondered – rather rhetorically and not for the first time – how I, and others, ever wrote books without the internet.

Despite all the above, I am writing a paper book – one that Chicago Review Press will publish in three electronic formats as well: kindle, e-pub, and pdf files. Of what use will my book be, as it begins to go out of date as soon as it’s published? An example, I hope. I read, analyzed, and interpreted the raw material on the web, and I hope to encourage students to do the same as the wind energy field changes week by week – using my book, along with the amazing electronic library we have at our fingertips.

Great post, Gretchen!
I bet you had a blast with the activities. Great way to pull the kids in and make the information relatable.
Looking forward to your interview post.

Great to hear your process, Gretchen! You're such a dedicated researcher and adventurer!

It's great to hear about a book with a long shelf life, and even better, a revised edition. Congratulations. I also hear your novel is out too. Hooray!