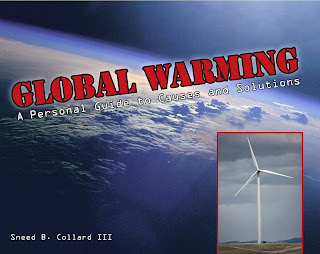 What do you do when you set out to write about a topic that continually heats up the news with its controversial nature? I had to ask myself that very question when beginning my book Global Warming—A Personal Guide to Causes and Solutions.

Most global warming books I had read spent a huge deal of time proving that global warming is happening. After following the topic for decades, however, I felt that scientific evidence had passed far beyond the point of needing me to repeat that data for the gazillionth time. So, I made a bold decision. Right up front, I stated, “This book spends very little time trying to convince you that global warming is happening. The scientific evidence for that is overwhelming. Instead, I focus on what we need to do to solve this growing crisis.”

Simply stepping around the controversy was a liberating decision, and for a couple of reasons. First, I was able to explain to readers why so many people—and corporations—challenge global warming. (Simply put, coal companies, car manufacturers, and others make huge profits by continuing to generate and waste energy as they—and we—have always done.) The second reason this decision was liberating is that it freed me up to focus on what really matters—what we are doing and need to do to solve this overwhelming problem.

Of course, global warming will continue to be challenged, because there are still many people with a vested interest in ignoring it. As writers, however, we shoulder an especially important responsibility in making sure that young readers have access to good information, even if other people don’t like it. It may be no accident that a small publishing company, Lifelong Learning, published Global Warming. I’m not sure that a larger company would have allowed me the freedom to tell it like it is. Larger companies, after all, are owned by stockholders and are terrified of reactionary elements in educational systems across the country. This is reflected in extensive censorship of state tests, textbooks, trade books, and even magazines.

Anyone interested in our future has to fight this censorship wherever they see it. Letters, blogs, and petitions are all well and good, but it’s raw purchasing power that will make the difference. By making honest books a success, educators and consumers will determine just what information young people are and are not going to receive. That, in turn, will determine just how bad global warming and earth’s other problems are going to get. Meanwhile, I urge other writers to adopt a similar approach with “controversial” subjects. If that controversy is driven mainly by money or desires for power, simply state the obvious and step around it. Then focus on what’s really important.

Global Warming is not available through many of the usual channels. To order it, please call Lifelong Learning at 877-502-7477 or go to the following website: http://www.projectcriss.com/41-global-warming