On September 17th, I had the great good fortune to sit down for a telephone interview with award-winning poet and author, Nikki Giovanni, and her editor at Henry Holt, Laura Godwin. Nikki and Laura's most recent collaboration is Lincoln and Douglass: An American Friendship, illustrated by Bryan Collier, which goes on sale this month. We talked about their new book, as well as about the state of nonfiction and poetry in today's market. 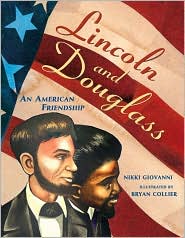 Lincoln and Douglass tells a story about the relationship between two men widely credited with abolishing slavery in the United States: President Abraham Lincoln, who was president during the Civil War and eventually signed the Emancipation Proclamation, and Frederick Douglass, a former slave who lobbied tirelessly for an end to slavery and equal rights for people of color. (Side note not found in the book: he was also a supporter of women's suffrage, who attended the first feminist convention in Seneca Falls, New York, and signed onto the Declaration of Sentiments.)

One of the first questions I asked is where the idea of writing about the relationship between the two men came from, as opposed to doing a biography of either individual. Nikki answered that Laura initiated the idea for this project. Showing the importance of timeliness with books, Laura noted the impetus for this project. "I knew there would be a lot of books out for the bicentennial of Lincoln's birth [in February 2009], and I thought it would be interesting to have a book out that wasn't a straight-up biography. I knew Nikki would come up with something great."

The book includes biographical information about Douglass and Lincoln, as well as their relationships with the abolitionist movement, and includes profiles of John Brown and Mary Ellen "Mammy" Pleasant, both of whom were involved directly or indirectly with the raid on the armory at Harper's Ferry. Nikki noted that "the abolitionist movement was really big and it did have breadth, and that's why Mammy Pleasant and John Brown," adding that "Mammy is a forgotten figure of history." As Nikki related, both in person and in the book, Mammy Pleasant is an interesting character who escaped slavery in Maryland and went west to San Francisco, earning a living by doing laundry and running a boarding house. That said, Nikki indicated that she never considered a separate book for either Mammy Pleasant or John Brown.

Her decision to talk about the relationship between Lincoln and Douglass was based on stories she'd learned about the relationship between the two men. Quoting Professor Anna Arnold Hedgeman, an African-American civil rights leader, politician, educator and writer from memory, Nikki said, "The problem with the Lincoln memorial is that they need to have a statue of Frederick Douglass standing there looking over his shoulder."

When I asked whether Nikki and Laura have another biographical project in the works, they indicated that they don't – yet. However, Laura said most enthusiastically that she would love to do another biography with Nikki. In particular, Laura thinks "the way she's able to make connections and focus on an event makes the whole time period make sense."

Nikki talked about her interest in historically-based projects. Although she is currently a professor of English at Virginia Tech and has won several awards for poetry, Nikki said, "I'm a history major. . . . I learned poetry very independently." When I asked Nikki and Laura whether they felt that poetry was a useful form in which to discuss nonfiction subjects (with specific reference to biographies such as The Poet Slave of Cuba by Margarita Engle, Twelve Rounds to Glory: The Story of Muhammad Ali by Charles R. Smith, Jr., A Wreath for Emmitt Till by Marilyn Nelson and the works of Carole Boston Weatherford, I found that neither of them felt that nonfiction poetry texts were new, and that both of them felt that they can work well. Laura said, "From my point of view, these sorts of things come and go. Sometimes a particular book catches the popular imagination, but I feel that it's always been around." Nikki implicitly agreed with that assessment. "I think it's wonderful. I'm a practitioner. I'm aware of what you're talking about, and I've read some. I've been writing prose poetry for years and I see it as the field catching up," she said.

"It's an easier first choice."

One question I had was whether nonfiction and poetry are both considered "other" in children's publishing. Laura answered, " I would have a hard time disagreeing [that it's other] – there's more fiction. It's an easier first choice." That said, Laura was of the opinion that nonfiction is still growing. "So many kids are naturally interested in the world around them. It's a natural part of the literature for kids. If you turn kids loose naturally, they're going to read some of each of these [, fiction and nonfiction]."

During our conversation about nonfiction, I asked about the importance of sources and fact-checking. Nikki agreed that it should be important: "When writing for children, you have to give them the information and it has to be correct." Nikki made clear that she shared the stories she herself had been told. In response to my question as to whether the facts were re-checked in-house, Laura said, "Nikki is coming from a vast store of knowledge. We don't hire her for her fact-checking skills. The book goes through copy-editing." For certain, the publisher documented that Douglass was at the second inaugural after the speech, and they checked to be certain that the venue was correct because the illustrator needed that information as well.

Near the conclusion of our interview, I asked Nikki some questions about her other new title, Hip Hop Speaks to Children, out last month from Sourcebooks Jabberwocky. You can read about that over at my blog, Writing and Ruminating. In addition, we talked about The Grasshopper's Song: An Aesop's Fable Revisited, illustrated by Chris Raschka, which was released this spring. In particular, I was curious as to whether Nikki was trying to make an argument about art, based on the grasshopper's decision to retain lawyers to sue for payment for his music during their summer work season. Nikki said that she grew up hearing Aesop's fables, and that her favorite part of the story was always where the grasshopper says "Am I not worthy of my bread?" Said Nikki, "When the lawyers ask the grasshopper, 'Was there a contract? Did they ask you to perform?' and later, when they say, 'Everybody loves a clown', they're representing the argument that art is just there because it tickles us." But according to Nikki, "art is an integral part of us." Nikki continued, "Every time they cut school budgets, they want to cut art. Art is part of what informs the ethics of the community."

Kelly, This was fascinating. So interesting that Nikki Grimes was a history major and came to poetry more on her own. I love the idea of not putting one person, so what if he was an amazing president, right at center, but showing more how things happen through friendships. I love that last quote about art.

I can't wait to get my hands on this book. Meanwhile, I went back to the chapter about Bryan Collier in Dilys Evans's Show and Tell. I love that his grandmother, who he lived with after age five, made quilts and played around with fabric art.

Thanks for the great information!

Jeannine & Jama:
Fans of Bryan Collier's art will totally love it, and Nikki Giovanni has written some lovely turns of phrase.