The Agenda of a Biographer Counts 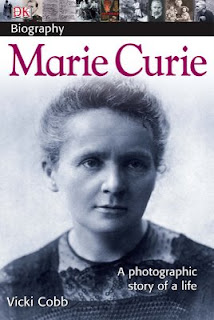 The DK biography series “A Photographic Story of a Life” picks very well documented subjects. In doing the research for Marie Curie, published in August, I must have brought home at least twenty biographies on her for both children and adults. My problem: What on earth can I bring to the party that that will set my book apart from all the others (aside from the compact and jazzy format set by the publisher)? The answer: me as author.

You see, I have an agenda. I want to get kids interested in science. Marie Curie’s work is intimately connected with the work of other scientists during the twenty-or-so years when chemistry and physics came together and culminated in modern atomic theory—a model of the atom that explained the behavior of gases, chemical reactions, electricity, light, changes of state of matter, radioactivity, the periodic table—in short just about every bit of data that had been accumulating over the previous 200 years in the disciplines of chemistry and physics. A bio of Marie Curie gave me the opportunity to tell a part of that story through the life of an interesting female scientist. For me, it is one fascinating tale.

I also have a bit of biography myself. I know from having been around for a while that there are themes and threads in the life of any multi-faceted human being. Telling a life story by sticking to chronology can make a reader’s eyes glaze over. But telling how a thread develops can be an interesting narrative in itself. Marie was a wife, a mother, a daughter, a patriot of Poland, an expatriot living in France, and the other woman in a sex scandal in addition to be a driven scientist. It was fun to weave in all these threads to the big ideas of the scientific revolution she was a part of. She was a woman in a man’s world and I know what that feels like from some of my experiences, such as being the only female in a pre-med Columbia College organic chemistry course or speaking at the Fermi Lab.

As a children’s book author yet another discipline is imposed on the telling of a story. I am terrified of boring the reader. Most people’s lives don’t unfold like a well-crafted drama. Yet, the demands of today’s entertainment-saturated readers means that I could lose my reader after any sentence. That awareness has been conditioned in me for many years. Above all, it is imperative for those of us who write nonfiction to write a good read.

I think it is the job of a biographer to find points of connectedness with the subject. I found many with Marie Curie as I did with my first DK bio on Harry Houdini. These people were successful and worthy of our admiration because they, too, had agendas that gave their lives purpose and meaning. My life and my biographies have both been enhanced by finding ways for their agendas to fit in with mine.
Posted by Unknown at 5:00 AM