Over ten years ago a particularly biting segment aired on 60 Minutes entitled YES BUT IS IT ART? It began with Morley Safer quoting PT Barnum’s legendary remark “A sucker is born every minute.” Safer went on to say most contemporary art is “worthless junk.” He even filmed a group of children at the Whitney Museum, and pointing to a large graffiti-like painting, asked, “Do you think you could do as well?” One little boy announced, “I could do better than that.”

The media abounds in messages that today’s new artists are trying to put something over on us and laughing all the way to the bank. The New Yorker always has a cartoon spoofing some current new art world trend. One of my favorites from many years back pictures two men, very well-dressed and puffed up, standing before a Jackson Pollock painting. One man says to the other, “His splatters are masterful but his dribbles lack conviction.”

The Gap in the Bookshelf (one of my favorite subjects). In 1989 there were no books for young readers on looking at contemporary art . Biographies of artists tended to concentrate on the old masters.. So Sandra Jordan and I decided to write our first book together The Painter’s Eye, which we hoped would help children enter a dialogue with new art and come to it with an open mind and a fresh eye. Now almost twenty years later, we have collaborated on 11 books together, and most of them focus on 20th and 21st century artists and artworks. Since the early 90’s, some terrific books about contemporary art for kids have been published. In addition, the lives and works of earlier artists are now being presented in a more exciting, creative way. It was great recently to visit the bookstores at the Milwaukee Art Museum and the Saint Louis Art Museum and see so many of these books filling the Gap on the Bookshelf.

Here are a few books on art for young readers that I enjoyed looking through. Some deal with modern and contemporary art; others cover artworks by more traditional and old master artists (chosen by me because they were so delightful!). 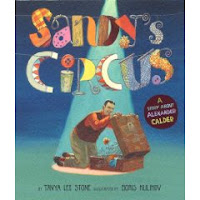 Sandy's Circus: A Story About Alexander Calder by Tanya Lee Stone and Boris Kulikov. A charming tale about the artist “Sandy” Calder making his famous circus, now on display at The Whitney Museum in New York.· 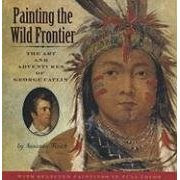 Painting the Wild Frontier: The Art and Adventures of George Catlin by Susanna Reich. This book about the artist George Catlin, famous for his paintings of Native Americans, is filled with photographs, drawings, and reproductions of the artist’s works. Reich also tells a fast-moving story. 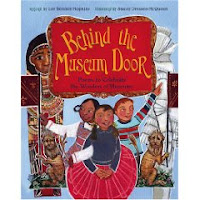 Behind the Museum Door: Poems to Celebrate the Wonders of Museums collected by Lee Bennet Hopkins. Illustrated by Stacey Dressen-McQueen. Some of our favorite poets for children invite us into museums and write poems about some of the treasures we might see there from a mummy to a Picasso. 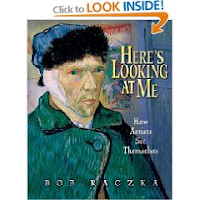 Here’s Looking at Me: How Artists see Themselves by Bob Raczka highlights self-portraits as diverse in style and period as an etching by Durer to a photograph appropriating a Caravaggio by Cindy Sherman. Bob’s many art books for kids are fascinating!!!

There are many more terrific books about art and artists and over the next few months I will try to feature some of them. Hope you will have a chance to see my new book with Sandra Jordan,

Christo and Jeanne-Claude Through The Gates and Beyond (Roaring Brook Press). It tells the story of these two partners in life and art, who have collaborated on large-scale artworks all over the world. The projects from wrapping The Pont Neuf in Paris to unfurling The Gates in Central Park last not more than two weeks and are paid for completely by the artists.The funds come from the sales of Christo’s drawings, prints, models, and earlier works. By the way, they were both born on the same day in the same year, each in opposite sides of the world. We interviewed them over a period of four years. One of the joys of writing about living artists is the opportunity to meet them and follow their work over a period of time. During the years they were organizing and engineering The Gates, our project was on hold. They were so busy. Sandra and I wondered if we would ever finish the book. Finally months after the hugely successful Gates project was dismantled, Jeanne-Claude left a message on our editor Neal Porter’s machine, saying “Let’s get the ball rolling.” And we were back in business!

Posted by Jan Greenberg at 6:12 AM

Jan, great post. Your books, and Sandy's Circus would be a good reading combo with Blue Balliet's new fiction Calder-related book, The Calder Game. Wouldn't it be wonderful to see kids soaking up art!

Thanks for the nice mention, Jan. I'm a fan of your books as well, especially ACTION JACKSON. By the way, if you haven't seen the movie, "WHO THE !@#%*&$ IS JACKSON POLLOCK?", check it out. It's a hoot, and a real eye opener into how snooty the art world can be.

Interestingly in Heart To Heart: New Poems Inspired by Twentieth Century American Art, the poet Ronald Wallace wrote a poem responding to Calder's Circus. That would be fun to use as a model for the class to write their own poetry. (p. 62). Thanks, April..and Bob, I know there is a kind of elitist attitude toward high art and that sometimes the art world can be considered "snooty". (Warhol tried to blur the lines between popular culture and high art.) But in terms of doing books for young people about artists,especially those who are contemporary,would you not agree that choosing those who are considered significant by curators. critics and other artists are the ones whose works you would choose to share with our audience?

By no means was I passing judgment on anyone's choice of artists for their books. I was simply passing along the title of a movie that I thought you might enjoy. In a nutshell, a woman who is a truck driver buys a $15 painting at a flea market, and it turns out that it may very well be an authentic painting by Jackson Pollock–someone she's never heard of. Her attempts to verify the painting's real creator make for a very interesting and funny documentary. That's all.

Bob, I did understand that you were sharing your take on the movie...I read about it and didn't have a chance to see it. I was just trying to interest you (and other writers of biographies) in a dialogue about how we choose our subjects. Aside from highlighting an artists whose work is significant and who has an intriquing story, Sandra Jordan and I also have to be passionate about his/her wrtwork.

Jan, fantastic post!
One of my favorite places in the entire world is the Chicago Art Institute's children's book department in the store.

I'll be teaching an art appreciation lesson later this year around Calder. Of course, I will start by reading Sandy's Circus... and the poem will be perfect to read while the students do the project. Their teacher will read The Calder Game to them... maybe after the lesson. (I think I mentioned this in my last post.)

Can't wait to read your new Christo and Jeanne-Claude book!

Thanks, Anna..There are two other marvelous books for children on Calder's Circus...actually both classics in the field...both sadly out of print..a look at the actual Circus in reproduction, I think, is important for kids to see...Jean Lipman's Calder's Circus(1972) and Maira Kalman's Roarr Calder's Circus (1991)...maybe they are at either your public or school library.