OR:  What I did over my summer vacation.

I was asked to teach a Reading and Writing class for students in grades 3-7. This was at a summer academy renowned for it’s college test prep for high school kids. They wanted to start a junior version of their program for upper elementary and middle school kids; in other words, grab them early. As my only teaching material I was given a typical workbook with vocabulary lists and lots of crossword puzzles and word searches to supposedly make the rote memorization of words removed from all meaningful context fun, fun, fun.

Luckily I realized that no one was actually checking up on me and, thus, I could probably devise my own syllabus. I set to work, and quite a lot of work it was, to plan on using one nonfiction book for each day of class for eight weeks. Using the workbook would have been a lot easier but I just couldn’t make myself do it. So I worked quite hard to come up with an interesting group of books and worthwhile lesson plans built around each one. I certainly did not make a salary commensurate with the amount of time and effort I put in. But I did have a sense of satisfaction that I had saved these kids from a meaningless summer. At the end of the eight weeks,  my tired and burnt out self believed we had all learned quite a lot from my classes.

As an example of what I did, I want to talk about one of my favorite non fiction picture books: My Grandfather’s Journey by Allen Say. Even though this book won a Caldecott Medal for its illustrations, it’s the power of its few, well-chosen words that gets me every time. 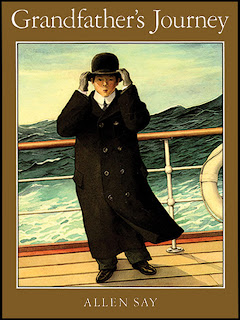 The vocabulary is richer than one might think at first glance. I could easily come up with a vocab list that was appropriate and meaningful to ten year olds. Examples from the text:  astonished, enormous, marveled, scattered, longing. We talked about enormous for a while. Was the feeling the writer evoked much different than if he had just used the word big? We all agreed the difference was itself enormous. We also considered the author’s somewhat unusual descriptions like “the lonely seacoast.” “How can a seacoast be lonely?” I asked. There were many interesting answers to that as well.

This non fiction picture book also has a plethora of themes for many more avenues of discussion: immigration, discrimination, family relationships, types of transportation and clothing, World War II, internment camps, etc. In terms of writing, we talked about writing in the first person. Some readers figure it out from the beginning, but for those who don’t it’s a joyful surprise when they understand the relationship between the writer and the story.


When I have tutored kids at previous times using this book, I have paired it with Susan Kuklin’s How My Family Lives in America. 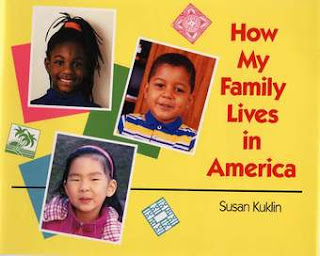 This book presents three kids from three different cultures describing their everyday first or second generation family life on a daily basis. I ask the students to write about their personal family life in America, specifically focusing on how they feel the mix or pull of two different cultures. It’s a theme from Say’s book that has resonated with every single kid so far.

When one of the student’s parents complained to the director that the books I was reading with the kids were “too easy” I didn’t worry too much because I knew she was wrong. Some of the kids asked to read “thick books”  because that’s what they were used to and identified as being at a higher level. But I stuck with my thin non fiction picture books and kept pointing out the nuances that made them more complex than they appeared by the size of their pages. In the end, I think they proved to be lean, mean excellent learning tool machines.

Posted by Linda Salzman at 6:00 AM

What a great idea, Linda. For your students' sake and to make use of all that work.

What a great idea, Linda. For your students' sake and to make use of all that work.

Linda, I LOVED that you noticed that the door to your classroom was closed and that you had the courage to do what you thought was right! That's the way I taught science back in the '60s. But back then, we teachers had a lot more latitude. What you were teaching is the processes stipulated in the CCSS. It will be interesting to see how your students perform this year. Is there any way to do a follow up?

I can't resist chiming in here to endorse your approach (and book choice) but also to encourage teachers to take a stand for the value of PBs in reading instruction for all ages, not "just" as read-alouds for nonreaders. Kids and parents who define "good reading" as reading longer, reading faster, and pronouncing big words need to experience the depth, breadth, and complexity of meaning and emotion elicited by quality picture books.This experience will enhance the quality of their reading in "thick" books.Thanks for a great post.

I was horrified to learn today of a teacher who told their 5th grade class not to read books that were too thin or had print that was too big. Not a peep about content! I wish you were teaching that class Linda.

I support the use of picture books for everyone. However, when children are asking to read "fat" books, they are flexing their reading muscles in order to develop stamina for longer books. It's a rite of passage to be able to finally read chapter books. It's BIG stuff.

I support the use of picture books for everyone. However, when children are asking to read "fat" books, they are flexing their reading muscles in order to develop stamina for longer books. It's a rite of passage to be able to finally read chapter books. It's BIG stuff.

This is very true and I was thrilled to see each of my students this summer carrying their own "thick book" in their backpacks for their own personal reading pleasure.

But it's important for them to understand that many books, and the concepts and ideas they introduce, are often multi-layered and deserving of thoughtful discourse by any age readers. Nonfiction picture books can be worthwhile and enjoyable for multi aged readers in the same vein as almost all Dr. Seuss books and the like.