In 2008, when I began submitting to publishers my children’s book on the Mars rovers Spirit and Opportunity, I got a number of rejections that basically said: We love the idea, love the writing, love the story, but we don’t think there will be interest in the market as the mission will be long over by the time the book comes out. Now, rejections are never fun to get, but these made me want to scream: This story is never over! This is the on-going story of our exploration of our solar system.

One of my beefs with the way science is often taught in school and presented in textbooks and even in many trade nonfiction children’s books is that science is portrayed as a category of facts that kids need to learn rather than an ongoing, ever-changing set of questions people have about the world around them.

That’s why I was SO pleased when my book The Mighty Mars Rovers: The incredible adventures of Spirit and Opportunity was published as part of Houghton Mifflin’s Scientists in the Field series this June, just two months before the next Mars rover Curiosity was scheduled to land on the red planet. 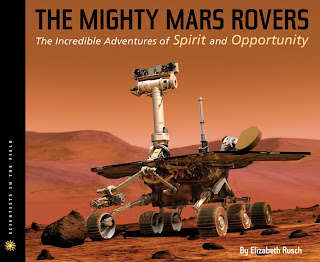 There are so many connections between Spirit and Opportunity's and Curiosity’s missions that it’s nearly impossible to miss that Mars exploration is an on-going question, on-going story. Many of the same people have been involved in both missions, from the main subject of my book, Steve Squyres, the principal science investigator for Spirit and Opportunity who is also involved in the science of the new mission, to Pete Theisinger and Rob Manning, lead engineers on both missions, to Jennifer Trosper, a mission manager for both missions, and Joy Crisp, a project scientist for both missions. Watching mission control during the nail-biting landing of Curiosity was like re-living the landings of Spirit and Opportunity – the familiar faces, the tension, the worries, the hopes, the awe. (If you missed the landing, you’ve got to see this cool 3-minute video that melds footage from mission control and launch parties across the country with simulations of the landing process.)

There’s something else in the news these days that drives home the point that space exploration and science is an on-going quest. Astronaut Neil Armstrong died on August 25, 2012. The connection? Chapter one of The Mighty Mars Rovers opens on July 20, 1969, as a thirteen-year-old boy named Steve Squyres watched in wonder as the Apollo mission put people on the moon. In 1969, Neil Armstrong and Buzz Aldrin did something (walking on the moon) that ultimately inspired a young boy to dream of sending rolling geologists to Mars. Steve Squyres and hundreds of thousands of other scientists and engineers safely landed Spirit and Opportunity on the red planet for a mission so successful that it essentially answered the question: Was there enough water on Mars to support life? (Yes!) With that question solidly answered, and with everything else we learned from Spirit and Opportunity’s mission, today, the next Mars rover Curiosity can focus on searching for other building blocks of life. THIS is science.


Discussion questions like these help students experience the connection between science books and what is happening in the field right now – and inspire readers to imagine science they may want to do – questions they might want to try to answer—when they grow up.

Oh, and one more thing. All those editors who rejected my book because of timing were wrong. Not just in a philosophical sense but in a literal sense. The mission I wrote about in The Mighty Mars Rovers is not over. Defying all expectations, Opportunity, expected to last a bit over three months in the harsh, frigid Martian environment, is STILL roving the red planet, sending back photos and information about our neighboring planet more than eight years later. That little rover is like the Indiana Jones of space exploration. You, your students, and your kids can catch up on Opportunity’s most recent discoveries and see new photos sent back from Mars anytime you want.

* A complete teachers’ guide to The Mighty Mars Rovers, including discussion questions and hands-on activities, can be downloaded for free here.
Posted by Elizabeth Rusch at 6:00 AM

Welcome to I.N.K., Liz, with this terrific post! I know all to well how fixated educators are on the ever-growing body of facts produced by science rather than the process used to discover them. Congratulations on your perseverance! Scientists were first limited by their senses. I can imagine how blown away Galileo was the first time he looked through his telescope and saw mountains and craters on the moon. His personally-made tool only magnified 7 times. You can buy a toy telescope today that does better than this! As the body of knowledge produced by science grows, so does the sophistication of the tools used to acquire it. But the questions we use them to answer are often pretty basic. Before we can answer the question, "Is there life on Mars?" We need to ask, "Is there water on Mars? If so, are there any other building blocks for life there as well?" Once we get these answers we can other questions like "What kind of life is likely to exist on Mars? What can we build to detect it?" The Mars Rovers are simply yet another kind of ingenious tool we have invented to probe a universe well beyond our physical limitations but not beyond our imagination.

Welcome to I.N.K., and I can't agree with you more. Science is not only an ongoing discovery, it's looking at the world, getting excited about it and wondering. And you're right, we all can do that.

I look forward to reading your book. I have to say that when I first saw that video of the landing, and the people who achieved it, I choked up.

Welcome to I.N.K., and I can't agree with you more. Science is not only an ongoing discovery, it's looking at the world, getting excited about it and wondering. And you're right, we all can do that.

I look forward to reading your book. I have to say that when I first saw that video of the landing, and the people who achieved it, I choked up.

Elizabeth, I think "Scientists in the Field" is the perfect home for your book, which is sitting on my side table right now. I have a Curiosity-obsessed kindergartener, and being able to watch Steve Squyers grow up and achieve his dreams (not without a lot of effort) through your book has been amazing. Kids love fact-based nonfiction, but they also love compelling stories that show them what fun science can be. Kirsten Larson

I love your post, Liz. And Susan, I love your definition of science "looking at the world, getting excited about it and wondering." I hope we see many more books abotu the process of science in the future.