The Problem With Word Problems

Greetings from Lima, Peru. I’m here for a tour of three international schools (in Caracas, Lima and Santa Cruz, Bolivia). I had an experience in Caracas that I’ve had many times before in the USA and it has me thinking… and now blogging. 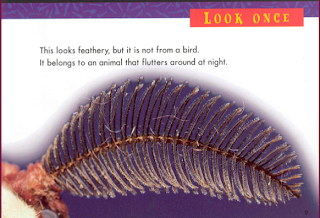 On a screen, I showed a group of 2nd graders a page from one of my “Look Once, Look Again” books. The idea of that series is that you see a close-up photo of part of an animal (or plant) and text that hints about its identity. Then you turn the page to see the whole organism, and learn a bit about it.

Here’s the text: “This looks feathery but it is not from a bird. It belongs to an animal that flutters around at night.”

Many of the second graders at Escuela Campo Alegre in Caracas said the same exact thing that second (and other) graders at schools all over the United States have said: “Owl.” If I ask what kind of animal an owl is (and I always do), the same child will quickly answer, “A bird.” And if I ask, “What did the book say about it being from a bird,” he or she will recall, “It is not from a bird.”

Yet, they almost always say that this is from an “owl.” The “flutters around at night” seems to overpower the “is not from a bird.”

Why? I have no answer. 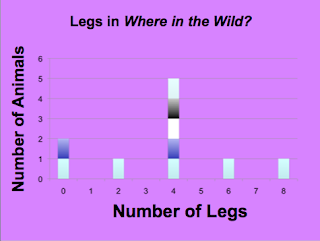 Here’s another one, also shown to second graders. It’s a graph showing how many legs are on the various animals in my book Where In the Wild? Camouflage Creatures Concealed…and Revealed. I’m happy to say that, by and large, with a little guidance second graders everywhere can understand the basics of the graph. When I say, “What number of legs appears most often,” they usually answer, “Four.” My next question, “How many animals in the book have four legs?” usually generates the correct answer, “Five.” Good, they do seem to get it that you look along the “X” (horizontal) axis to see how many legs and you look on the “Y” (vertical) axis to see how many animals have that number of legs. Correct answers to other questions confirm that they get it.

Then comes the stumper. I designed it to be a little harder, but not that hard. “Are there any animals in the book with an odd number of legs?” They almost always say, “Yes.” (I have confirmed that in most cases, they do know the odd numbers from the even numbers.) When I ask a follow-up question, like “How many?” or “What odd number of legs does an animal in the book have?” there is no clear answer. They don’t have one, yet they were quick to say “Yes.”

Why? I have no answer.

I do have a hunch, though. My hunch is that they fail to understand the question, not the graph. I am reminded of a professional book by Char Forsten called The Problem With Word Problems Is the Words. Great title. And so true. Students need to understand the words, deeply and fully, before they can answer word problems.

And how do students get fluent in understanding words? The answer is no secret and no surprise: by reading. And especially by reading non-fiction. Complex non-fiction. The Common Core State Standards place a great emphasis on reading complex non-fiction and informational texts, reading them deeply and integrating related works on the same subject. It is estimated (though no hard data exists) that in elementary schools, children read 80% fiction and 20% non-fiction. Perhaps moving that ratio closer to 50:50, as the CCSS suggests, would help students figure out that the thing that looks feathery but is not from a bird cannot be from an owl but is, in fact, an antenna of a moth … or that no animal in Where in the Wild? (or anywhere, as far as I know) has an odd number of legs.

Yet another eloquent example of why the new Common Core standards make sense. Good one, David.

I believe the wrong answers have a lot to do with the learning environment and timing. In a large group setting kids are pushed to give an answer right away, usually by the teacher who wants to keep the lesson moving and by the other kids who will shout out the answer if the other student doesn't respond quickly enough. To get to the higher level reasoning, kids need time to think. If you had given the same questions and materials to children in small groups of two to four students, with no time pressure to give an answer immediately, its likely kids would give it some thought and then actually start discussing it and that's where we would have seen those higher level cognitive reasoning skills kick in.

Interesting point, Linda. Next time I'm doing this in a relaxed setting with a small group (as opposed to a big assembly program with time pressure to move on), I will encourage them to take their time and discuss it with their neighbors. We'll see what happens.

Or you could ask them NOT to answer out loud, but invite them to investigate. Answer one another...

as for odd-legged critters [wait. that's not right. both of mine are rather odd, but they get me around, bless 'em] let's have Two cheers for the ubiquitous Binary.

it is ubiquitous, right? the old art major queried....

I also agree that the legs question may be about language. My guess... they hear "odd" and think "weird." Once they get "weird' in their brains it may take a little doing to come to the mathematical meaning of odd.