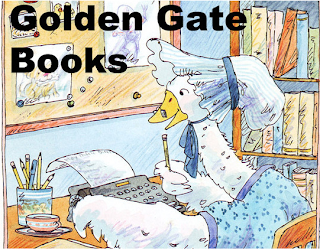 Exactly one month ago I received an email from my friend and colleague (and fellow East Bay resident), Marissa Moss. It began almost apologetically:

“I know this probably comes out of thin air, but I've heard from so many talented writers and illustrators that they have problems getting contracts now from the major NY publishers who only want books with mass market appeal …”

Sounds like an understatement in these days of publishing uncertainty (aka “crisis”) but I was hooked. Marissa is a versatile writer and illustrator of both fiction and non-fiction, full of ambition and creativity, who has enjoyed considerable success. What was she up to?

“The golden age of picture books, when fine books were edited and published despite not being blockbusters, doesn’t have to be over,” she wrote.

Instead of lamenting the demise of publishing as we knew it, Marissa announced that she is going to turn the dearth of publishers seeking to put out beautiful books into an opportunity. She has found financial backers who share her values, and she is starting a new publishing house intended to turn back the clock by producing “quality books the old-fashioned way.” Golden Gate Books will make its mark with children’s fiction and non-fiction that book-lovers will want to hold, admire and read repeatedly.

This is actually the second recent blast of publishing news to gust my way. Our own INK is becoming a publisher of e-books, starting with the out-of-print titles of our members. I have four titles ready to go, as soon as I do the necessary scans and we work out the contract details to sell our books on the iTunes store and perhaps other e-marketplaces. This is exciting news not only because it gives authors a chance to immortalize our books and make them available at very low cost to interested readers, however many or few they may be. I am also thrilled because it is the impetus I need to enter this new world of publishing and experiment with its myriad possibilities.

While INK, for starters at least, will be e-publishing out-of-print titles (which, in the current reality of publishing, does not mean out-of-life or out-of-value titles), Golden Gate Books, despite valuing the paper-in-hand approach to reading, may also enter the e-realm by releasing all of its titles as e-books within months of their print debut.

Whether or not its titles have an e-life, Marissa is embracing web-based promotion and even fund-raising. Right now she has enough money committed to plan eight books during GGB’s first year, but if she can raise an additional $50,000 she will go for twelve with a larger marketing bang for all of them. She is using www.kickstarter.com, a fund-raising website that follows the NPR model to seek pledges from donors who receive premiums at different levels depending on how much they give. No pledges are actually collected unless the goal is achieved. In this case, it’s $50,000 in pledges by April 19, 2012. Check it out and please feel free to choose your premium:

Here is one piece of the pitch, where Marissa (writing from the future) summarizes the mind-set of today's typical publishers:

"Instead of taking risks on new voices or subjects, they focused on what had already sold well – one Harry Potter book led to a slew of imitators. One Twilight book created a wake of supernatural novels. Instead of looking for the great books of the future, they looked for books that were like great books of the past." 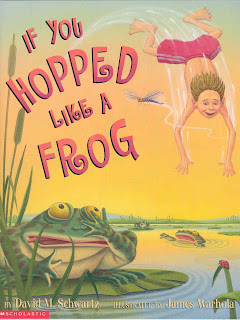 I recall my appearance at the Texas Library Association conference in April, 2000, after my book If You Hopped Like a Frog had just come out with Scholastic. It put forth a new, enjoyable approach to proportional thinking in which human abilities were compared, proportionally, to those of animals. Proportion is an important concept in algebraic thinking, taught in various ways (most of them confusing, boring or both) throughout the upper elementary and middle school grades. The Scholastic team was out in force at TLA giving away, waving and wearing a plethora of promotional items in various shapes, sizes and levels of extravagance. Did even one of these marketing pieces reference my book or that of any other up-and-coming author? Not on your life! Every single one was about Harry Potter, whose third (or was it fourth?) installment was hitting the American market. Harry really needed the help, didn’t he?

On May 25, 2009, I wrote a blog post here called “Paen to a Publisher,” in which I paid tribute to one of my publishers, Tricycle Press, which (along with its parent company, Ten Speed Press) had just been bought by Random House. I wondered aloud whether the many uncommon practices that had made Tricycle my favorite, if smallest, publisher would be retained once it became part of the world’s largest media conglomerate. (For example, Tricycle ignored a near-universal convention in publishing by allowing an author to have a voice in selecting the illustrator for his or her book. Tricycle even allowed authors and illustrators to influence editing decisions and sometimes gave them the final say. Can you believe?)

I have never written a postscript to that discussion and here it is: in January, 2011, Random House announced that it was scuttling Tricycle Press. My favorite publisher is history. One of the many pieces of flotsam left adrift by the maelstrom of that decision was my manuscript I Rot: The Fall and Rise of a Halloween Pumpkin, which I described in my May 24, 2010, INK blog post called “Researching With Researchers.” Since then, I have been seeking a new publisher for my rotten manuscript (and the revolting photos by Dwight Kuhn that accompany it).

And I am now delighted to announce that the magic of a decomposing pumpkin (and it is magical in its own transformative, regenerative way) will be featured on Golden Gate Books’ first list in the Fall of 2013. Great news, David. Thanks for reminding everyone that iNK is becoming a publisher. Please let us know if you have a book you'd like to bring back to life. We, too, are in the process of fundraising to take us to the next level. The new focus on the Common Core Standards is a game-changer for our genre and the future of iNK Think Tank. We are in an extraordinary position to catch this wave.

Congratulations on the sale of your rotten book, David. I've had that same looking pumpkin on my porch every Halloween or shortly thereafter year after year! Best of luck to you and your new publisher. As for the publishing scene, it can be depressing to think about how it's all changed over the years. But I don't blame it all on Harry Potter. Way back in the 70s, some houses began turning the decision to publish over to the marketing department people, which meant editors couldn't just take a flyer on something new and odd (or rotten, in the very best way). I remember an editor (this was around 1985) calling me to say she was filling out the p & l form for one of my projects and asking what books my book was like so the acquistions committee could compare them all and forecast sales! I said, "None, I hope," which needless to say wasn't the answer the committee wanted to hear. But as long as there are people like Marissa Moss in the world there's hope.

David,
What a jam-packed post this is. So, point by point:
Condolences about Tricycle Press, publisher of some of my favorite titles.I mourned their passing last year.
Congratulations about your rotten book coming to life- it will be great paired with with that timeless title, Mousekin's Golden House by Edna Miller, and just in time for Halloween 2013!
Terrific news and kudos to GGB's launch- there may be hope for the future of "successful" creations after all!
And than k you for sharing such encouraging updates on a Monday morning.

David: Congratulations to you and Marissa! Over the years we've seen many small indie publishers start up, become successful, get bought, and then disappear. But there are always new sprouts sprouting - and this one at the sproutiest time of year.

Congrats on finding a home for your rotten work! :)

Ebooks are selling like hot cakes. When you have decided on a suitable topic and written a fruitful book, all you need is good sales.