Have Laptop, Will Travel


One of the best things about being a writer is our portability which can incite mobility. Long ago when I was an MFA student at Vermont College, I met a visual arts MFA student who complained about the mighty costs and problems of shipping artworks to the twice-annual residencies. We writers only had to pack our floppy disks.
Nonfiction writers aren’t quite as portable as our fiction-writing cousins. Speaking for myself, my desk is littered with loose papers, file folders bulging with notes and photocopies, books piled high on said papers and stuffed into overflowing bookcases.
But the lure of mobility forced me to rethink my portability a couple of weeks ago when I flew to England to attend the twentieth anniversary retreat of the Kindling Words workshop in the Lake District. Fourteen of us spent a week at a four-star hotel, eating four-course meals each night, walking along the lake, into the woods, and up the hills (but not enough, I fear, to work off those four-course meals.) And, yes, attending workshops and writing.
Though I wasn’t the only nonfiction writer there, many were tapping away on fantasy novels. As they retreated to their imaginary worlds by the fireside in the lounge, I time-travelled back to eighteenth century Revolutionary America, to meet my biography subjects. As others were drawn by guided meditations into the subconscious minds of their protagonists, I tried to do the same, but was interrupted by an annoying voice whispering, “Document your sources.” 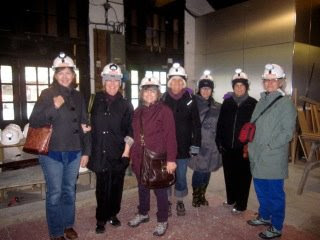 Seven writers, headlights shining, about to descend into the subconscious of their protagonists, or was it the Honister Slate Mine? 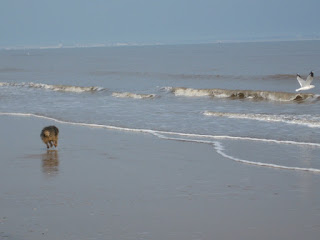 When the luxurious week was over, I took off for East Yorkshire to visit old friends, including writer Marvin Close, who live by the sea. One of the world’s biggest offshore wind farms will soon arise off the Yorkshire coast, but not soon enough to be pictured in my next book, The Wind at Work, a history of wind energy. So here, instead, is a picture of the beach with dog Libby chasing a seagull.
One evening Marvin arranged an interview at the local radio station, BBC Humberside. The topic of the interview: how a children’s writer from southern California came to be an obsessed fan of English football in general and Chelsea Football Club in particular. I tried to mix it up with writerly talk, but not having many people to discuss football [soccer] with at home, I was happy to talk about the sturm und drang of the current Chelsea season. 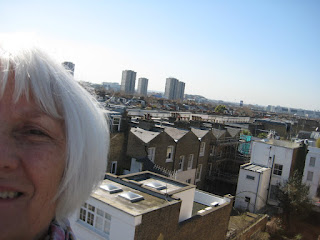 Now I’m in London for three months, thanks to my latest travel adventure: home exchanging. Sitting in a top-floor flat in Notting Hill Gate with sun streaming in on all sides -- I brought it with me from LA -- I’ve got several manuscripts in progress, just a few file folders of research, a couple of books, and a brand new card from the Royal Borough of Kensington and Chelsea Library system. All the comforts of home!
I’m still immersed in the American Revolution, which has a whole different significance from where I sit now. And I’m on the lookout for something to research on the ground here. English football perhaps?
More anon on the joys of portability and mobility.
Posted by Gretchen Woelfle at 3:00 AM

Wow, your travels and adventures sound amazing. And seven works in progress! Impressive, to say the least. Have fun in London and have fun researching and writing.

You made me smile with your "document your sources" remark. It will be interesting to see results for all the inner and outer excursions in the years ahead. I know you'll be pointing us in some interesting directions. Hope the weeks ahead continue to inspire!

Hmmmm....as a big Manchester United fan myself, it sounds like I should have done some of my Darwin and King George III research in England! I did get to go to the Galapagos and South America though, and I have to say that traveling to do research has to be the best perk ever when we write nonfiction, yes??