So, if you're reading this, you're doubtless aware that today is the 19th of March, 2012. Happily for me, writing-wise, today marks an absolute gaggle of birthday anniversaries, i.e. opportunities to note the lives, times, words, and works of significant individuals. AND, not so by the way, it is now four years since Arthur C. Clarke's deathday; 62 since that of Edgar Rice Burroughs. (I love it that ERB, whose Mars explorer/adventurer, John Carter is to be found at your local movieplex this weekend, is found www.tarzan.com.)
If they were not already deeply dead and long-departed Sec'y of State, 3-time Presidential candidate, courtroom duelist, and supremely gifted gasbag, William Jennings Bryan, the "Great Commoner," would be celebrating his 152nd birthday. Lawman Wyatt Earp would be 164 today and the glorious western painter Charles M. Russell would be turning 148. The valiant and earnest "Pilgrim," governor of Plymouth Plantation, William Bradford would be a seriously decrepit 422-year-old, as of this very day. How I loved learning about and visualizing this man - and his tragic wife, Dorothy, for crying out loud, who fell off the good ship Mayflower and if she jumped who could blame her? Not me! – when I researched and wrote my first history book.
But the birthdays I most wanted to note are those of a pair of very different men, medical missionary, David Livingstone, ('I presume'), born in Scotland, 19 March, 1813; and geographer, translator, spy, poet, soldier, cartographer, speaker of more than 25 languages, Captain Sir Richard Francis Burton, pictured above, born in Devon, England, 19 March, 1821. He seems to have been a fencer, too - why am I not surprised? About dashing, dramatic Burton, I came across this book for young readers and this, about the earnest Livingstone. What did these men have in common other than their fealty to Queen Victoria? They were explorers. Certainly they both explored the continent of Africa, where Livingstone ultimately died. Europeans had always been fascinated with the so-called 'Dark Continent.' But Burton's explorations extended into Arabia, where he, a non-Muslim, disguised himself so he could investigate Mecca; elsewhere in Asia, to South America - even into the American West, in 1860, via stagecoach. He wanted to check out Brigham Young and his fellow "Mormons."
I don't know - what is it about explorers and the very idea of wandering off to see the unseen? Some of my fellow INKsters have been bitten by that bug, but not I. Perhaps because I recently illustrated Julie Cummins' book about explorers of the female order - oh baybee, those women! - Louise Arner Boyd of the Artic. Freya Stark, passionate writer of her travels through the Middle East, the Arabian deserts, and into Afghanistan. The Valiant Nellie Cashman of the Canadian wilderness & Tombstone, Arizona.
Indefatigable botanist, Ynes Mexia, who explored the South American wilds. Lucy Evelyn Cheesman, entomologist of the South Pacific. Julie got to write about the mountaineer Annie Smith Peck, the mysterious Alexandrine Tinné, and a few others, but I got to visualize them with my paints & colored pencils, safe at home.
Perhaps because I am a timid sissypants who fears getting lost, who gets very anxious when I have to learn something too far afield - why can't I just KNOW?! Perhaps because my own personal armchair at home is my very favorite place to be, I am fascinated by explorers, but then who wouldn't be? My Eyewitness EXPLORER book is a ragged, 1991 model (this LINK will lead you to a soon-to-be-pub'd new version), well-stuffed with clippings about Steve Fossett and Jean Pierre Blanchard, an 18th century balloonist. My bookshelves bulge with books about explorers. Just this past weekend at a literature festival in Ottawa, KS, I purchased yet another, Christina Taylor Butler's shiny, little Explorers of North America. (Which reminds me, as I write, it's March 17th, 208th birthday of American explorer and Mountain Man, Jim Bridger, whose weary old body was buried not far from here, here in Independence, Missouri.) And I want this one, though the title makes me ill: Explorers Who Got Lost. These, too: The Picture History of Great Explorers.
Into the Unknown: How Great Explorers Found Their Way by Land, Sea, and Air. Explorers. AND, finally, though I'm supposed to confine myself to nonfiction and NOT fantasy (Do I want to be an explorer? Shoot. Me. Now.): So You Want to Be an Explorer, by that smartypants duo, Judith St. George & David Small.
Thank heavens for books and joys of armchair exploration.
Now I'm going to go fix me a cuppa cocoa. 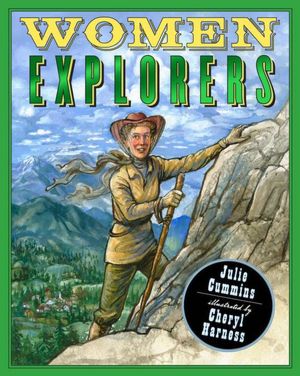 of notable birthdays. the anniversaries of the births of a pair of 191st anniversary of the
Posted by Cheryl Harness at 8:00 AM

Cheryl -- what a fun post (and for some reason it seems particularly nice on the last official day of winter. What winter, you might ask). Anyway, I enjoyed exploring (and not getting lost doing so) Explorers Who Got Lost. I'm thinking that many more wandered far afield than that book talks about, but it stills makes the point that getting lost doesn't always mean failure. That it offers an opportunity to find oneself and maybe even a continent or two. Or at least a small Pacific island. I am always getting lost while putting together my books.

I suppose, too, that if you did not get lost, you'd miss the thrill of finding your way back to the trail, no?