As I posted on my own blog last week, this year I'm mostly buying books for the holidays. And I got to thinking about some of my favorite nonfiction offerings this year. Not that these are the only nonfiction books out there, naturally, but here are some that I found to be knockouts:

For the youngest readers

Swing! by Rufus Butler Seder. I'm counting this one as nonfiction because it accurately depicts the actions taken in a variety of sports. I give this book the highest sort of recommendation: Within hours of its arrival in my house, it was gone, sent off into the world with my children's brother-from-another-mother, who is nearly four. B was willing to hand off his Thomas the Tank Engine trains in order to carry the book, which he has since spent lots of time happily looking through, watching as the player hits a ball and the ball comes right at you, or as the skater pirouettes upon the ice, or the boy shoots a foul-line throw. High praise indeed. This one is a line-blurrer, since it's really for kids older than the baby set. Great for toddlers and the preschool set, as well as young school students.

We Are the Ship: The Story of Negro League Baseball by Kadir Nelson. Award-winning illustrator Kadir Nelson proves that he's equally talented as an author. A must-read for anyone with an interest in the history of America's favorite pastime or in the Civil Rights movement, since the book focuses on what the Negro Leagues were, and what it felt like to be a part of them, including being the brunt of name-calling and being subjected to the thousand cuts of segregation (not all of them being small cuts, by the way). For those interested, Nelson offers signed copies of his book on his website at list price, and "remarqué" copies for $100, which feature both a signature and an original piece of artwork. 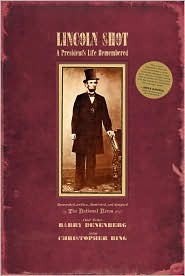 If you're going to buy one new children's book about Abraham Lincoln this year, this is the one to buy. Be prepared to make space for, it, though, because this book is TALL, measuring a foot wide by 18" high. It contains 40 pages, conceived as a newspaper representing the one-year anniversary of Lincoln's assassination and the search for and capture of the assassins, this book looks and feels like nothing you've seen, and will grab and hold your attention start to finish. Wanna see an inside page? Cool, yes?

Recommended for anyone over the age of 8 or so with an interest in American History, particularly the Presidency, the Civil War and/or Abraham Lincoln.


Books for those interested in the Revolutionary War and/or feminism 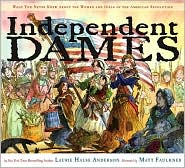 Independent Dames: What You Never Knew About the Women and Girls of the American Revolution by Laurie Halse Anderson, illustrated by Matt Faulkner. My full review can be found elsewhere, but in short, here's what I liked about this history book: All told, 89 women and girls are profiled in the book, including African American and Native American women who fought for the Patriot's cause, whether in word or deed, as well as devoting a bit of attention to the Loyalists as well. This book contains a tremendous amount of information, and it has quite a bit going on in it, but the genius of its set-up is that it never feels heavy or pedantic.

Books for a good cause 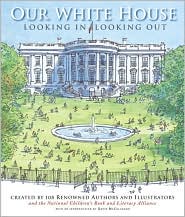 Our White House: Looking In, Looking Out is the creation of the National Children's Book and Literary Alliance (NCBLA), and contains contributions by 108 children's writers and illustrators, along with content from a bunch of other folks, including Robert Kennedy's comments following the death of Dr. Martin Luther King, Jr., an essay by Lynda Bird Johnson about her bedroom in the White House, and words from a number of presidents, including Jimmy Carter and George H.W. Bush. Pretty much my only criticism of the book has to do with the failure to include these other folks in the headcount on the front of this wonderful book, which relates the history and stories of the White House.
Posted by Anonymous at 12:18 AM

Independent Dames sounds like a great gift idea for an independent-minded young girl. I would have loved this if it had been published when I was a kid.

Also, I find that children's non-fiction is often a good resource for my own Y/A fiction, since the information is condensed and the illustrations convey a lot.

That's an excellent point. Depending on the subject, the kid books can boil things down to a "just the facts" sort of presentation, which can be really useful as a starting point for research.

I recently came across your blog and have been reading along. I thought I would leave my first comment. I don't know what to say except that I have enjoyed reading. Nice blog. I will keep visiting this blog very often.