This morning in the New York Times I read about another outed memoirist, Margaret B, Jones, whose account of life as a foster child growing up in the drug infested L.A. projects, Love and Consequences, turns out to be pure fiction. This follows on the footsteps of another recent fabrication, Misha Defonseca’s Misha:A Memoir of the Holocaust, which includes a story about being raised by wolves. Wolves? Did anybody who read it believe this?

.
Meanwhile I’m slogging away with my writing partner Sandra Jordan, trying to copyedit for the twentieth time every detail, including a complicated List of Artworks, Bibliography, Quotes, text and more of a non-fiction project Christo and Jeanne-Claude:Through Tthe Gates and Beyond, scheduled to be published sooner rather than later. It might have been easier to write a novel based on these fascinating, strong-minded artists. But it is not a novel. It is non-fiction.
.

The beauty of biography lies in digging deeply into the life and art of someone else and getting it right. The challenge in writing about living artists is telling a vivid story that does not begin “They were born” and ends “They died.” We cannot put words in the subject’s mouth or invent the action. Frankly if I were writing about myself, I would turn it into fiction, as I did in my first autobiographical novel A Season In-Between, back in 1979. It was more fun that way. Jones’ editor, who recalled all the books, says there were other ways to tell that story instead of lying about it. The book might have been a terrific novel.
.

I wonder what others think about this? Let me pose a question. If you were writing a memoir, would you feel it was proper to sometimes exaggerate or embellish the facts of your life?

.
My new book, Side by Side: New Poems Inspired by Art from Aro 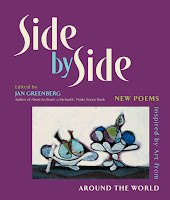 und the World, an anthology that I edited, will be published in April.

Hoppin' on soapbox:
While it's biography related not memoir related, it upsets me when I read that Pissarro painted from his Paris hotel room because of his eye problems. Argh! As he wrote to his son, he was afraid to leave his room due to antisemitism in Paris at the time. True, children may not understand that... but I have found it in many adult books, also. For some reason, this really bothers me.
Jumpin' off soapbox!

Jan~~~I love all your books!

Hi Jan, I featured yours and Sandra's forthcoming book in a blog post recently remembering The Gates and then a few days ago I saw the Maysles' film on HBO and thought about them all over again. What a wonderful February that was. Can't wait for yours and Sandra's book.