Information graphics (infographics, if you must) have a long and rich history in print. The classic of the genre is probably Charles Joseph Minard’s 1869 map of Napoleon's march on Moscow.

According to the information graphic authority Edward Tufte in his book The Visual Display of Quantitative Information, this map “may well be the best statistical graphic ever drawn.” The map shows the size and direction of travel of the French army both geographically and by date as they invaded Russia, then retreated. It also shows the temperature at key points of the march, making it dramatically clear how river crossings and bitter cold spells decimated the French army. Of the 424,000 men who began the campaign, only 10,000 returned.

Minard’s map sets a high bar, but lately I've noticed that the information graphics in newspapers and magazines have become more common, more complex, and more effectively designed. No doubt this is due, in part, to more sophisticated and accessible digital tools. I also suspect that the audiences for these publications have become accustomed to interpreting information rich graphics on television screens and mobile devices.

Video games, with real-time inset maps, 3d views of a city or battlefield, gauges showing strength or battery life, lists of other players, etc. have certainly helped a significant segment of the population — many of them children — develop impressive visual and cognitive multitasking skills and the ability to monitor multiple informational inputs (wow --I'm talking the talk).

I'm starting to think, however, that this is an area in which nonfiction picture books may be missing an opportunity. There is a real possibility that children — our audience — are capable of processing and benefiting from more complex informational graphics than those we typically include in our books. Now, I understand that not every author is interested in chasing this particular trend, and I certainly don't think that we should all jump on this bandwagon, if that's what it is. But I was a graphic designer for many years before I was an author, and I've always been intrigued by the possibility of communicating information graphically.

I explored a few of these possibilities, if only tentatively, in my most recent title, The Animal Book. Here are three of them . . .

The first is a diagrammatic food web. It's intentionally complicated, almost to the point of confusion, the better to express the complex interactions in a forest food web.

The pie chart, which shows the relative number of living animal species, is more conventional and accessible.

And the last graphic, which is perhaps more decorative than strictly informative, does emphasize that the vast majority of animal species are extinct. I think all three examples make their points more effectively than text alone. 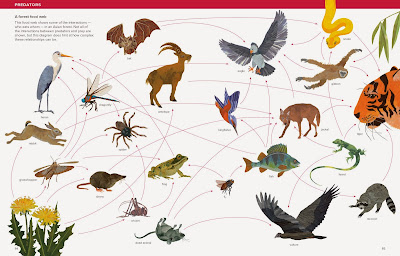 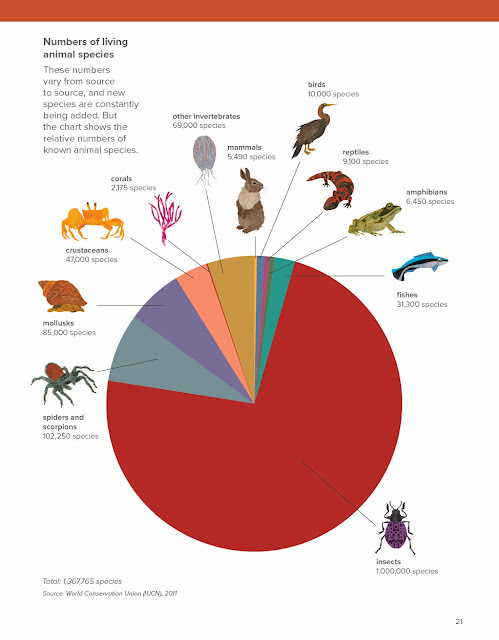 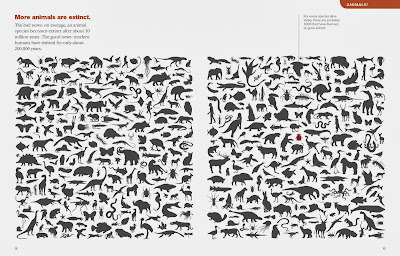 Posted by steve jenkins at 4:00 AM

Great post, Steve. I love Tufte and often delve into his books when I'm thinking about how to structure a NF PB text. He really is a master at presenting information in a way that is both succinct and accessible.

I agree that kids really can understand complex visuals, and I think we may see at least some NF PBs moving in that direction.

Excellent points, Steve. Hope the publishers hear you and allow authors who do not have your graphic skills to suggest graphics that can be created by visually-skilled artists at all levels of nonfiction. These informational graphics have tremendous power to deliver the "aha" moments that make kids wonder, plunge deeper, and share what they've learned. Giving kids opportunities to embrace graphics of this sort could be our best hope for our species to mentally process the mass of data we are presented with daily in an internet world. Really great infographics jazz my brain and I'm sure the minecraft generation gets that, too, as you suggest. So fired up about the topic I may have to blog about it next week!