Las Vegas, Non-Fiction and the CCSS for Math 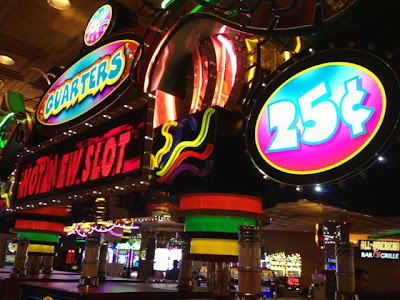 I'm just back from Sin City, known to some as Las Vegas. I swear I was sinless. Not a single quarter went from my pocket to the slot. (I've seen the math and I know slot machines are a bad deal -- except for the casino.) I went to Vegas because I gave a talk there at the Western Regional Conference of the National Council of Teachers of Mathematics, and when I wasn't speaking I was attending sessions. I wanted to see what the math people had to say about the Common Core State Standards.

Most of the media spotlight on the CCSS has focused on tests and the scary prospect of falling test scores under the CCSS. Math educators, on the other hand, talk a lot more about teaching students than what will happen when the students (and the standards) fall victim to the latest round of standardized testing. One plank of the CCSS is the Standards for Mathematical Practice; these are the forms of expertise that teachers at all levels should seek to develop in their students. For example, the first one says, "Make sense of problems and persevere in solving them." Can't argue with that.

The other thing I heard a lot was the word "rigor," which is designated as one of the three key instructional shifts of the CCCSS for Mathematics. (I knew you were wondering: the other two are Focus and Coherence.) And, as it turns out, "rigor" is a controversial word in math circles. Can you figure out why?

Well, as with so many things these days, there's the Tea Party crowd and there's the rest of us. To the Tea Party-goers, rigor means "more "(problems), "faster" (answers), "better" (% correct) and "higher "(test scores, of course). To the math educators I heard at NCTM, "rigor" means three elements: "conceptual understanding, procedural skill and fluency, and application with equal intensity," as explained in "Key Instructional Shifts of the Common Core State Standards for Mathematics."  A metaphor proffered by one presenter was that of a three-legged stool. Rigor is the stool and the three legs are those three elements, apportioned equally if the stool is going to stay upright and level. 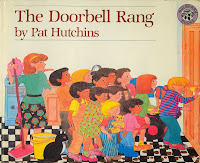 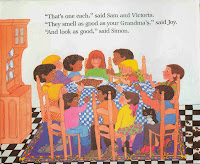 Wow! Conceptual understanding and application equal to skill and fluency? Yep. I've always thought that was the right equation and now the notion is ascendant with the CCSS. I've been thinking about where non-fiction fits in. My first thought, echoed by those I spoke with, was the "application" component. After all, through stories, readers see how math concepts can be applied to the real world. To pick one classic of the "math-lit" genre, Pat Hutchins's The Doorbell Rang comes to mind. Two children are about to enjoy a plate of twelve cookies when the doorbell rings and a guest arrives ... then another ring and two more guests ... then another two... then six more ... then.... (you'll just have to read the book to find out). Each step of the way, to their long-faced chagrin, they must modify their calculation of how many cookies each of them will get. With an enlightened teacher or parent at the helm, the math will be rampant. Here, in delightful literary form, is an application of addition, division, factors, even algebra. 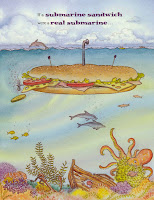 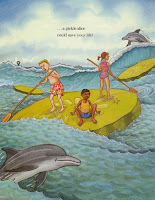 But what about the other two legs of the stool? Can non-fiction add to their support? You've no doubt figured out my answer: of course. Take conceptual understanding. I'll choose a book of my own,  If Dogs Were Dinosaurs, which is a companion to the earlier If You Hopped Like a Frog. Both are about proportion, The first compares animal abilities to corresponding abilities of animals; the second looks at relative size (scale) through preposterous examples. "If a submarine sandwich were a real submarine. . . a pickle slice could save your life." The math is explained in the back — and it's easy! See the funny examples, read the back matter, try a few examples of your own (thank you, teachers), and voilà: ratio and proportion make sense. Daunting (and boring) no more. Many have told me so. 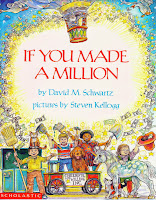 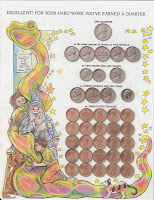 Computational fluency is a tougher nut for an author to crack and I would say that in most cases it should not be the goal of a non-fiction author unless her paycheck comes from a textbook publisher (in which case, she probably doesn't write on this blog!). But I won't disallow the possibility of "procedural skill and fluency" being a side benefit to a "real" book. Take If You Made a Million, my book for young children about the math of money. Five coin combinations equivalent to a quarter are given (one quarter,  two dimes and a nickel, three nickels and a dime, five nickels and 25 pennies). Does that mean there are only five? One second grader explored this question -- and found thirteen. Two students in the same  class determined that there are 49 coin combinations that equal fifty cents. ("We were proud of our work because we finally finished it," they wrote.) Think of all the basic skills practice that went into that determination! It didn't feel like drudgery because it wasn't. But the skills were basic just the same.

So, as is often the case (especially around this blog!), non-fiction is the answer. By no means is it all that's needed to meet the Common Core math standards, but it sure can help the stool stand up proud, tall and well balanced. 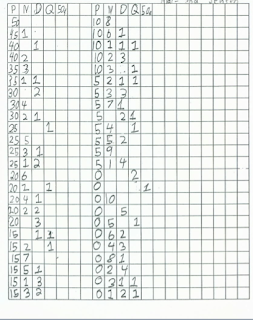 Posted by David Schwartz at 2:38 AM

Liked your discussion of rigor, David. Very helpful. So echoes conversations about critical thinking in other areas, too. NCTM conferences are grand.