Over the last year, the schools I’ve been visiting have been a-buzz over Common Core. Like other INK authors, I have had many educators exclaim “What you do fits in perfectly with common core!’  Frankly, at first, I had no idea what they meant other than perhaps what I’ve been doing for years, apparently, is suddenly in vogue and has new buzz words for it.

But the more I’ve learned about it, the better it sounds. We as a country definitely need to “up our game” in teaching and comprehension of these fields. My math teacher friends are generally pumped about the common core standards for math.

A great librarian, armed with his/her resources, is the heart of inquiry in a school. Information and resources come and go from that library and feed into all subject areas.  The idea of “library circulation” goes far beyond books. It has to do with feeding inquiry and information, books, whatever it is, coming and going from the library. So, here we are diving into Common Core, when many schools have laid off the very experts in this kind of inquiry: highly trained librarians. I think folks don’t really understand what today’s librarians do. So, I interviewed one about what she does. (By the way, she has freed herself to do this by coordinating an army of parent volunteers who do all the checking in and out of books and such...all those things one thinks a librarian does.)

Where else have I seen Common Core, librarians, books, and nonfiction authors working in harmony? One surprising place was in my work last year with Authors For Earth Day, a program founded by Brooke Bessesen. Authors volunteer to donate a portion of their school visit fee to an environmental cause the students choose by vote. 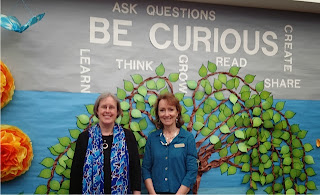 The librarians at schools I was visiting during Earth Week jumped on the idea, practically wrestled for the right to do it. And it wasn’t just for the feel good aspect of helping the environment. They immediately knew this was a Common Core bonanza which tied right in to nonfiction research and persuasive writing.   Here’s Hella Rumschlag, the librarian who booked me for the visit.

In advance of the visit, I chose five organizations for them to consider:  American Bird Conservancy, the Elephant Listening Project, the Nature Conservancy, the Pollinator Partnership, and the Rain Forest Conservation Fund. These are favorite organizations of mine and relate to my books such as The Bumblebee Queen and Secrets of Sound: Studying the Calls of Whales, Elephants, and Birds. I tried to choose organizations that would give kids a sense of the wide variety of environmental issues and approaches to solving them. Initially, I had chosen a sea turtle organization among the candidates, but the librarian informed me that the turtle is their school mascot so it would have an unfair advantage in swaying the students.

The 5th grade students researched the five organizations. Because Common Core emphasizes evaluating text, especially with regards to who authored it, the fifth graders could really look at the news about these organizations with a critical eye. They wrote persuasive essays on behalf of whichever organization they had. Some students appeared on the schoolwide television broadcast to advocate for their cause. Students in all grades voted on Google docs in order to avoid any paper waste associated with the project.

When I arrived, the students were excited about the vote that day. When the winner, Rain Forest Conservation Fund, was announced, the surge of joy from the students was so tremendous, tears rushed to my eyes. It was clear that the students felt a sense of ownership; they had done something great for the planet.

I gave my donation to Rainforest Conservation Fund and told them how it had been generated. They wrote an incredible thank you letter to the school. The letter added an additional layer of education to the project because it delineated, in detail, where the money went and taught about some fascinating new approaches to grassroots conservation in South America and Africa. The kids were read the letter on their morning school television show.

Next, the event was shared districtwide in an education newsletter.  The librarian was thrilled with the results of the program. The kids were so invested in their research, analysis of texts, and their persuasive writing because, as the librarian says, it had “real world consequences.” As for me, I felt like my donation from my school visit fee had been multiplied manyfold in its positive impact on the earth and education.

How else have I seen creative educators extend nonfiction to fit the needs of science standards and common core? Actually, many of the activities educators have done with my books over the years would fit perfectly with Common Core. It’s a new framework but this kind of text study and math analysis has been done by dedicated teachers and librarians for years. Over a hundred of those earlier activities are on my website, www.aprilsayre.com. Below are some links to common core standards and lessons that have come up in the last year. (Folks just send me links related to my books but I’m sure many nonfiction authors have terrific lesson plans and activities that educators have shared with them about their books, as well. Feel free to add some links in the comments section if you have some in mind.)

A science unit lesson with common core aspects from AAAS, the same folks who give those wonderful awards for best science books of the year:
http://sciencenetlinks.com/lessons/april-pulley-sayre/

An article in School Library Journal about Nonfiction as Mentor Texts (It includes my whale book, Here Come the Humpbacks.) 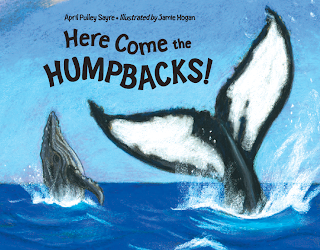 One of my most widely used books worldwide is One Is a Snail, Ten Is a Crab.  It’s easily extended to fulfill common core math standards at many levels.  Here are some related resources for that:

Initial list of Common Core Standards for One Is a Snail, Ten Is a Crab.

Lesson Plan for One Is a Snail, Ten Is a Crab
Other activities related to One Is a Snail, Ten Is a Crab
One Is a Snail Worksheets
As you can see, Common Core is a natural for librarians, teachers, and nonfiction authors who have been involved in inquiry for years. I say, let's embrace it and expand on it. The ideas seem solid and the thinking aspects of these standards are deeper than most previous mandated curricula. The bureaucratic aspects of how it is implemented are the sticky points and those will be fought in districts all over the country. Most of all, we just need to give our teachers more respect and better tools. And bring back librarians—the champions of deep inquiry!

Posted by April Pulley Sayre at 8:41 AM

What a wonderful series of events came from your Earth Week visit...great story! I agree that the CCSS line up with what authors of informational books have been doing all along (at least most of us!)