I write children's books because I truly believe that a book can change a child's life. I know, because it happened to me. Twice.  At least.

I've written about the first time on I.N.K. before. If you go here, you can see that whole post. It's called Why We Write for Kids.  But here's the relevant part:

I remember the day I first discovered I could learn from books. And that changed my life.For some reason in my school, Muhlenberg Elementary, in Allentown, PA, we weren’t allowed to check out books from the library until first grade. Maybe that was a good idea--we had to wait a whole year, and the anticipation was intoxicating. Then one day, we walked into the library—I can still see the beautiful wooden shelves, smell that old-book, old-paper, new-book, new-paper library smell. (I was back there for a school visit a few years ago and the library smells the same!) For some reason, maybe it was because it was straight ahead, I walked over to the non-fiction section and I pulled this book off the shelf. 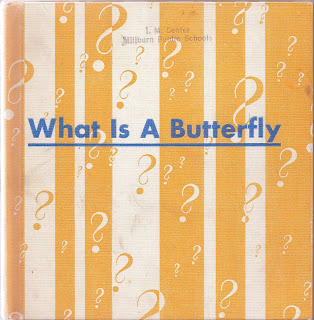 And on that day, when I was six, as my mother read What is a Butterfly to me on my bed (I honestly remember this moment--my back was up against the wall, my legs too short to reach the other side of the bed), I discovered that a book could teach me things, a book could help me understand how the world works, a book could make me smart. It was my own personal (excuse me) metamorphosis. I returned What is a Butterfly and came back home with What is a Frog? then What is a Tree? and there was a whole series!

That book, and series, opened up the world for me. And years later I would write a book called From Caterpillar to Butterfly, in the months just after my mother died. That book is part of a wonderful series called Let's Read and Find Out Science. From Tadpole to Frog by Wendy Pfeffer is one of my favorites. I would recommend it and that whole series for books that can change a kid's life, and open up worlds!

The second time a book changed my life was in college. But I'm going to talk about it because I was still a kid. I was under 20. And in a very significant way it continued what What is a Butterfly started. It opened up whole new worlds to me.

Here's the book, posing on my desk just minutes before I starting writing this post: 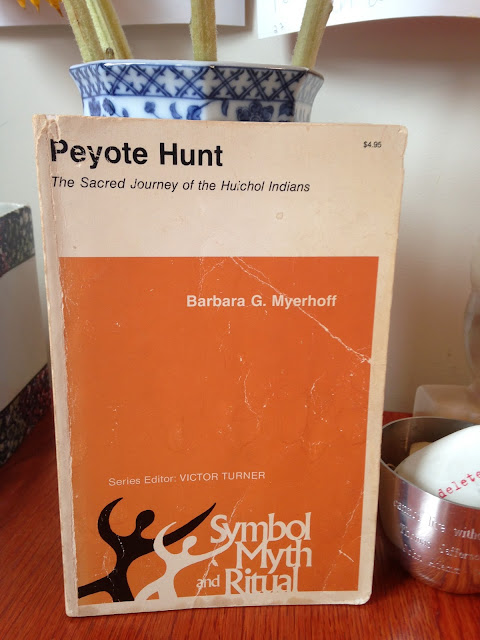 Peyote Hunt? Yes. Let me explain. In doing so I'm going to be completely honest, and I hope I will not offend anyone. I grew up Jewish. Although we were Reform Jews,  we were what I would call observant Reform Jews. Sabbath dinner every Friday night, services most Friday nights, etc. I had many non-Jewish friends, but I was ensconced in the Jewish world. And I believed it was THE world. The RIGHT way to live and be. I felt kind of sorry for people who weren't Jewish. Take out the "kind of." I felt sorry for them. I knew we were right. It's not that I tried to convert anyone (oh, no, Jews don't do that! We're right about that, too!), but I just felt like our way was THE way.

Then I read this book by anthropologist Barbara Meyerhoff. And it was as if not a light bulb, but an entire stadium full of lights lit up above my head. These Huichol Indians believed in their rituals and rites and peyote as much as I believed in mine. Who was to say I was right and they were wrong? Like a thunderbolt from above, I knew the answer was NOT ME. Not any more. And no, I wasn't upset. I was happy about it. Thrilled, even.

I realized then, at the ripe age of 19, that there was a whole world out there to discover--worlds not only of science and nature, as those early books had taught me, but also worlds of religions and beliefs. And non-beliefs. I majored in religious studies.

To this day I am fascinated by other people's beliefs, and foreign worlds, both religious and secular. (I'm fascinated by plumbers, for example. And mathematicians.) I love peeking into other people's lives. And I especially love celebrating the diversity on our planet.  Reading Peyote Hunt made this happen.

This led, eventually, to writing books about religion, and religious beliefs.  I wrote ten books in a series for National Geographic (Holidays Around the World), and after that about a marriage between two people of different beliefs: Charles and Emma: The Darwins' Leap of Faith.

You never know which books might open up worlds for a child. That's why it's so important to keep all of our libraries open, and to keep all books on the shelves.  Open libraries lead to open minds.

Books and Experience do that to one. If you really think about your own experiences and those of others (through books), the world becomes both larger and smaller in the diversity and sharing of those same experiences.

The book The Power of Myth (Joseph Campbell) produced the same exhilaration for me as your book on ritual and myth!

And I loved your book Charles and Emma, it both captured my imagination and joyfully reinforced my place in this magnificent world!

I understand exactly what you mean, Deborah. For me, it has been what people do for work and wondering how, over the course of decades, it has molded their perspective on life. So as a writer if I'm interviewing an astronomer or microbiologist or doctor or dinosaur guy, at the end of the official interview, I always ask how their job has affected how they see the world. The answers are often fabulous.

Thank you, T., and yes, I believe (!) that The Power of Myth has had the same effect on you. And Susan, I love that you ask that question, and I hope you will write about the answers you get!