Not JUST the facts, ma'am, but YES, the facts!

This month, the INK Bloggers are writing about life-changing non-fiction.
Some have featured non-fiction that changed their own lives. I cannot recollect any specific titles that molded my young mind so potently as to be "life-changing." Yet I think non-fiction did influence my childhood and the non-fiction I read as a child influenced my adulthood. In my author visits at schools, I show children how some of the books I now write are outgrowths of the questions I asked as a curious child, and the answers I found (or didn't find but tried). I tell them, "Wondering is wonderful."

For me, the process of seeking answers has usually involved books. I aspire to write books that spark children's imaginations yet the books I remember devouring to satisfy my curiosities were often mundane. Reference books. Even encyclopedias! Imagine!! If a reader told me now that a book I'd written reminded him of an encyclopedia, it would ruin my day. Yet, I have fond memories of poring over World Book Encyclopedia to immerse myself in facts that some might consider dry.

But are facts alone dry? In a way, this is an essential question of non-fiction. I would say this: if the reader has no previous investment in a subject, bushels full of facts are dry as dust. But if the subject already thrives in the mind of the reader, the facts can take on a life of their own and enrich the reader's life beyond measure.

I remember particularly well my fascination with facts about animals and stars. Once learned, the speed of a spider and the distance to Alpha Proxima lived vividly in my mind. Mentally armed with them, I could scurry down the field and rocket into space. Years later, they both figured into books I wrote.

This is not a call to INKers to abandon our careers writing compelling non-fiction and apply for jobs at encyclopedia publishers. (Never mind that the internet has put most encyclopedias out of business!) In fact, one of my favorite quotes about non-fiction would seem to contradict what I've been saying:

I'm still in favor of lighting the fires but it is worth considering that sometimes the predisposition of the reader allows the facts alone to be the tinder for the blaze. I am seeing now that the question is: how does the reader get such a predisposition? Sometimes it is from books of the "ignites the imagination" category. Other times... who knows?

So, for readers, teachers and authors, I say we're not looking for "the facts, and just the facts, ma'am," but please, let's not forget the facts. They can be tinder for those fires.

A case in point might be what I wrote in this blog last May about a high school student named Alex Grant. He experienced a life change when he read a book called Birds of the World as a mere first-going-on-second grader! I have looked at all the books I can find with that title (there are a few and Alex doesn't remember which one it was) but none of them is what I'd call inspiring non-fiction. And even though I don't know which Birds of the World book turned Alex into a future ornithologist, it's almost certainly a book in the "fact stuffing" category. Yet it was enough to engage him powerfully. I'll close by repeating his story from my May, 2013, post under the title, "The Power of Non-Fiction": 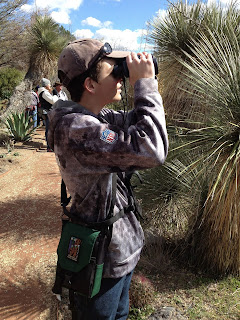 Alex Grant, the young man pictured here, is the subject of this post. We met early on a chilly February morning on a footbridge in the Boyce Thompson Arboretum, 60 mile east of Phoenix. We were among a dozen or so birding enthusiasts who had gathered for the weekly guided bird walk sponsored by the Arboretum. Alex and I discussed two related birds, initially indistinguishable to my eyes. Both were wrens, small songbirds with barred tails and thin bills. Binoculars lifted, Alex pointed out the differences: the canyon wren had more distinct coloration  —  reddish brown wings and back, and a bright white throat, compared with the paler, grayish brown rock wren whose throat lacked the lustrous white. Alex spoke eagerly, with the facts at his command and a confidence that belied his age: 15. Very soon he might be leading walks like this, as his reputation had reached the Arboretum and a ranger had invited him to become a volunteer bird guide — the Arboretum's youngest by far. He and his parents had come on this walk while he considered the offer.

Later, as the sun finally warmed the air enough for us to shed an outer layer or two, I asked Alex’s mother, Sonja Grant, about her son’s zeal for birds. It had begun during the summer between first and second grade. The catalyst was a book called Birds of the World. Alex had checked it out of the library and it had changed his life. True, he had already shown a keen interest in nature, and he'd owned books about birds as well as sharks, insects and other taxa. He’d read some of them so many times that their pages had fallen out. But with its dazzling photos and engaging text, Birds of the World had taken Alex to a new level of interest that he calls “a deep passion.” Before long, the passion spread to both of his parents, and the family had a new hobby. School vacations became extended birding outings in Arizona, California, Texas and Maine, the trips oriented around an important statistic—the number of species seen between Jan. 1 and Dec. 31 of the year. That number had reached 306 in 2012. Birders refer to a year in which they keep count as "a big year"; the Grants decided to do another big year in 2013, and by mid-May their list was up to 263 species.

Finishing his freshman year at Gilbert High School in Gilbert, AZ, Alex is homing in on a college education and career in ornithology. And it all started with a non-fiction book.

Posted by David Schwartz at 6:16 PM