I've been wondering: Can raw numerical facts be the raw material for creativity in the minds of children? If we just set  them loose on a set of data as if it were paint or clay, and we encourage them to find ways to use that data, will they come up with something that will make them, and you, say "Wow!"?

Today I went to the Panama Canal. Sounds like a nice Sunday excursion, doesn't it? I am in Panama for school visits next week, and thanks to the generosity of Kathryn Abbott, her husband Tim and their son Alan (an International School of Panama student), a visit to the Gatun Locks was on today's itinerary. Here's proof: 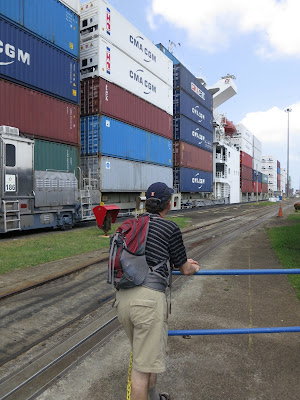 So here are some numerical facts associated with the Panama Canal:

-- Twelve to fifteen thousand ships per year pass through the canal.
-- The 22.5 mile passage takes two hours and saves the ship 7,872 miles and three weeks of sailing around Cape Horn.
-- The London-based ship called CMA CGM Blue Whale, which I watched pass through Gatun Locks, held 5,080 containers. On the basis of its capacity, it paid a toll of $384,000.
-- the lowest toll ever paid was 36 cents. It covered the passage of author-adventurer Richard Halliburton, who had an appetite for publicity stunts. He secured permission to swim the length of the canal in 1928, but no exemption from the toll, which was assessed on the basis of his "tonnage." (I wrote about Halliburton in the March, 1989, issue of Smithsonian magazine.) He swam alongside a rowboat manned by a sharpshooter who kept an eye out for crocodiles. It took him 10 days to complete the passage.
-- 1.8 million cubic meters of concrete were used to construct the Gatun Locks, one of the three lock systems of the canal.
-- About 5,000 workers lost their lives building the canal in the early 20th Century. Eighty percent of them were Black.
-- The locks lift each ship 85 feet to the highest elevation of the canal (Gatun Lake) and then back down again. Many of the ships weigh 60,000 tons or more.
-- Filling each lock chamber drains 26.7 million gallons of water from Gatun Lake. When the chamber is emptied, the water goes to sea. (The ongoing Panama Canal Expansion Project will change the system so that the water will be recycled.)
-- The width of the locks limits the size of ships that can pass through the canal. This distance, 110 feet, is called "Panamax" and it dictates the dimensions of ships worldwide.  CMA CGM Blue Whale is 106 feet wide. (Locomotives called mulas, mules, ride on tracks alongside the lock, pulling the ships with taut cables that also center the ships in the passageway. These seagoing behemoths must never, ever touch the sides of the lock!)

There are many, many more but that's enough to run my experiment. The question is: can students take these figures and run with them to discover something interesting, something "Wow!" They can make assumptions. For example, they could assume that the ship I saw is typical of those that pass through the canal. Thus, to use a simple example, they might calculate the annual revenue of the canal by multiplying the toll paid for the Blue Whale by 12,000 or 15,000 (or something in between). Then they could put that into some kind of context. (How many teacher salaries would that pay?)

Here's what I did as an example, using the last bulleted item listed above:

The ship I saw is 106 feet wide and the lock is 110 feet wide, so the clearance is four feet, or two feet on each side. What does that mean in terms we can relate to?

I scaled the Blue Whale to the size of my kayak, which is about two feet wide. The ship is 50 times as wide as the kayak. So I divided the ship's clearance of 2 feet per side by 50 to find out what my kayak's clearance would be: about half an inch! So... a 110-foot wide ship passing through the lock with two feet of clearance on each side is like my kayak passing through a concrete-walled chamber with a half-inch of clearance on each side, not touching either side, not even once, not even for a zillionth of a second! Is that a "Wow!" moment or what?

I find it way cool that math can turn a raw fact into a wowful wonder. Of course I'm already planning a book. Maybe teachers of upper elementary, middle school or high school students can plan a class around this. Make it open ended. Give the kids facts, calculators, internet access to look up information, and the time to play. Show them books that turn facts into "Wows!" (May I recommend my If Dogs Were Dinosaurs and How Much Is a Million? for starters, but don't stop there.) See if your young mathematicians can be creative artists. Wow! 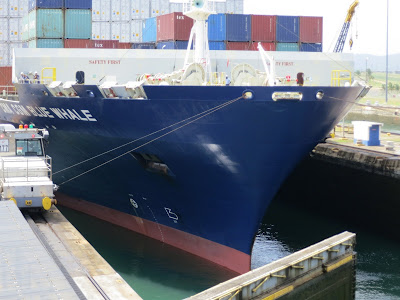 I loved the canal stats you provided and you did wow me with them and your suggestions for class use. So how long did it take Mr. Halliburton to swim the canal? I also love odd moments in history.

I like how your mind works, David. Great idea for kids, teachers and writers to think about.

Jim, I amended the part about Halliburton, including the answer to your question (and some other tidbits). David