Writing a True Story About Something That Never Happened 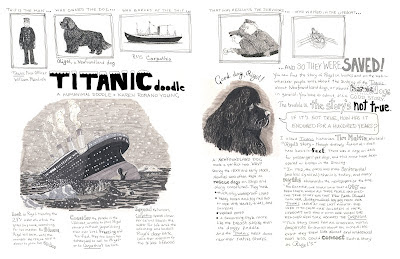 The sinking of the Titanic was a heart-breaking disaster that the public couldn't -- still can't -- get enough of. This week, The New York Times has published a number of stories about Titanic coverage one hundred years ago. In 1912, The Times printed special sections of news articles and first-person stories, fueled by competition with The Evening World, and managing editor Carr Van Anda is credited with inventing disaster coverage because of the special section of articles and features the Times put out.
This past Tuesday's Times told of the competition between the Times and The Evening World to get the story of a reporter aboard the rescue ship, Carpathia. The leading papers hired tugboats that raced out to meet Carpathia as she steamed into New York; as the World's tugboat edged alongside, the reporter tossed a bundle into editor Charles E. Chapin's arms. SCOOP!
I learned a bit about the nature of the journalism surrounding the Titanic a few months ago when I began working on a new Humanimal Doodle for the Titanic-themed issue of Odyssey. I began by searching for a Titanic story with an animal in it. There were some pets aboard -- pampered pedigree dogs and cats, of course -- and rats, no doubt. And then there was Rigel.
Rigel (who shared a name with the dog star, which shone that fated night) went overboard along with the lifeboats, and stayed close to one, doing his doggy-paddle. People in the boat called encouragement to him, until, hours after the Titanic went down, they grew too cold to call out to anyone -- including Carpathia sailors searching the dark waters. But Rigel lifted his sodden furry head and barked back, and was credited for saving a boatload of people.
It's a wonderful story that is found among Titanic histories, on the American Kennel Club's Newfoundland breed site, and among collected stories about heroic dogs. But it isn't true. Entirely fictional, according to the experts. So, rather than digging up more of the Rigel story, I was left with the choice of ditching it completely. Instead, I decided to research how Rigel's story had endured for 100 years.
Titanic historian Tim Maltin filled me in on the public hunger for Titanic stories, and the do-or-die attitude of many so-called journalists of the day. Tim started with the scene in the Titanic film that shows the ship's kennel being broken open. "This is based on the fact that there was a cage for passengers' pet dogs on the deck," -- a cage that must have been broken open during the sinking. "A week later, First Class Passenger Johanna Stunke , traveling on the Bremen from New York to Europe, looked over the rail as they were passing through Titanic's wreck site and saw the body of a woman in a nightgown, dead and frozen, with her arms clasped around a shaggy dog." He adds, "And that is not a shaggy dog story!"
But Rigel's definitely was. "In 1912 the press was more sentimental (and less cynical) than it is today. Many myths abounded in the newspapers at the time, again inaccurate but based on fact." One animal that was definitely on board was a toy musical pig whose owner, Miss Edith Russell, grabbed it from her cabin last-minute so she could entertain children in her lifeboat. Later, it was reported that a pig had been rescued, although so many people had died.
What fact was Rigel's story based on? He was a Newfoundland dog, a swimming rescue breed often kept aboard ships in the late 19th century. Newfies have webbed feet, thick, oily coats, the ability to stay thawed in freezing water, and a reputation for courage. What's more, Newfoundland was the nearest land. But maybe most of all the story touched the hearts of those yearning for stories of bravery and sacrifice.
New York Times article about competition for stories. 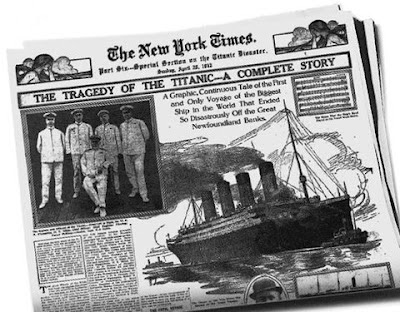 Posted by Karen Romano Young at 1:00 AM

Stories about the storytellers can be as intriguing as the stories themselves. Thanks for this one.

Very fascinating. So refreshing to read an article about the Titanic with a unique theme.