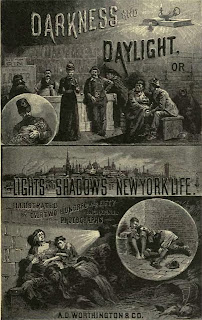 “Some days, I’m really more of a reader than a writer,” I told kids at a recent school visit. “I sit in libraries all day and read and take notes.”

A few kids appeared to cringe. One raised his hand and said, “So, um… you do homework for a living?”

After everyone was done laughing at my expense, I explained that I think of it more as detective work. “Okay,” I said, “maybe a nerdy kind of detective work, but still… My job is to find stories, and I read books to look for clues, follow leads, gather evidence.”

That won a few kids over, at least. But the thing is, it’s really true. And to me, those days spent following sources, never knowing where they’ll lead, are some of the most rewarding days—even when they don’t result in “useful” details or book ideas. Recently, at a used bookstore, I stumbled upon a thick volume from 1895 called Darkness and Daylight in New York, With Hundreds of Thrilling Anecdotes and Incidents, Sketches of Life and Character (and the subtitle goes on for four more lines). In the book's first section, a reformer and relief worker named Helen Campbell describes her work with New York City’s poorest. The details are vivid and shocking, and the text offers a wealth of urban street slang. At one point Campbell lists the names of homeless newsies she’s met, including Yaller, King of Bums, Snitcher, Snoddy, Kelly the Rake, Slobbery Jack, and King of Crapshooters.

I can’t begin to describe the richness of this source, so I’ll just tell one story. One day, at a charity hospital, Campbell met Jack, a boy of about eleven with “grey eyes, large and full of expression,” and a body stunted by hunger. Lying flat on his back, wrapped in splints and bandages, he told Campbell his story. 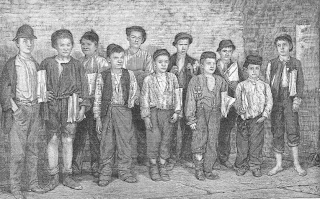 Late one rainy night, maybe a year before, he’d returned to his usual sleeping spot by the river. “I allus liked it along the docks,” he said. “You could often pick up oranges an’ bananas, an’ many a time I’ve licked molasses off the barrels.” That night another kid was curled up in Jack’s crate. “He wasn’t bigger’n a rat much,” Jack said. The kid, Buster, quickly told his tale of beatings and abandonment. “He was ‘most naked an’ hungry,” Jack said, “an’ when he dried up his eyes after a good a cry, I says to him, ‘We’ll go hunks, an’ whatever I have you shall have the same.’”

From then on, they were partners. They worked selling papers and shining shoes, but the lure of better money tempted Buster into daybreak work. “You don’t know what a Daybreak Boy is?” Jack asked Campbell. “It’s a whole gang what steals from small craft below Hell Gate, an’ sell their stealins for whatever they get, which is mostly nothing.” Jack tried to talk Buster out of stealing, but with no luck. “He liked the fun of it, an’ he was so little he could sneak in anywheres an’ he got to be a champion daybreak, an’ that tickled him.”

All the while Jack kept working, saving pennies toward the dream of moving west, and taking Buster with him. “I was awful worried over Buster,” Jack said. “I know’d if he could only get away he’d do well enough.” Jack followed rumors about his friend, and soon heard he was in hiding from the cops. Jack tracked Buster to a Lower East Side tenement, and tried to convince him to head west before it was too late. “He’d about promised me he’d do as I wanted when the woman in the next room gave the alarm.”

As the police charged up the tenement stairs, Jack and Buster climbed to the roof and ran to the building’s edge. Buster turned to Jack. “You meant to give me away, did you? Damn you!” Before Jack could deny it, Buster pushed him. Jack fell four floors to the ally below.

“He didn’t mean it,” Jack told Helen Campbell from his hospital bed. “And he got away, an’ so I don’t care, an’ he sent me word the other day that when I got well he’d go west or anywhere I wanted. So you see it’s come out pretty good. I’m so tired. I think I’m goin’ to sleep.”

Campbell said goodbye and left. A week later she got a note from a hospital nurse. Jack was dead. He'd had left a scrap of paper for Campbell, which was enclosed in the note. Campbell opened the scrap. On the paper, in shaky letters, were the words: “Please find Buster.”

Finding stories like that—that’s why I do homework for a living.

Steve -- I loved your post. My wife and I have two copies of the book and it's come in handy with at least two of my books already. A bit racist, but it's of the times. And the illustrations are priceless! I once came across a series of photographs that exactly matched the illustrations (though the illustrations were always a tad more sordid or sad); wish I could remember where I saw those photographs. Anyway, have fun with the book. Jim

Reaffirms my belief that every life contains so many riches.

Wow, what a great find! And I love how you describe yourself as a "detective" when speaking to students.

A heartbreaking story, so evocative.