The Urge to "Correct" History

I don’t often quote the ancient Greeks, mostly because I don’t know what they said, but there’s one Herodotus line that has always stuck with me. Describing the difficult craft of writing compelling, fact-based history, he said: "Very few things happen at the right time, and the rest do not happen at all.” His solution, as he put it, was to “correct these defects,” by rearranging and inventing his way to a great story. Too bad non-fiction writers don’t have that luxury.

I’ve been wrestling with this problem recently, as I toss around ideas for possible book projects. It’s always fun to throw open my notebooks and let ideas I’ve jotted down over the years jump out and fight for attention. The bad part comes when I get excited about one of the stories, begin researching it, and realize I’m facing the old Herodotus dilemma.

Sometimes it’s a simple of matter of not knowing. Take pirates, for example. Everyone loves these thieving murderers (including my 4-year-old daughter), but there’s a serious shortage of primary sources, and hardly anything from the pirates’ own point of view. Even the best, most exhaustively researched adult pirate books are riddled with lines like, “Blackbeard may very well have said…” and “It was at this point that Bartholomew Roberts probably decided…” The most painful false lead of all involves an 11-year-old boy named John King. What we know is that in November 1716, somewhere in the Caribbean, King and his mother were on a ship that was boarded and plundered by the pirate Sam Bellamy. King declared he wanted to join Bellamy’s crew. His mom said no. The boy threatened to throw himself into the sea unless he was allowed to become a pirate. His mom let him go. 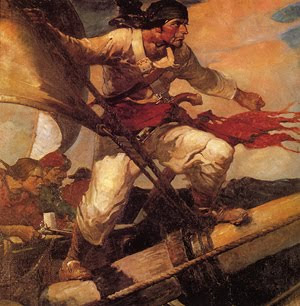 Shouldn’t this be the opening scene of an all-time great middle grade history book? The story has everything: a young protagonist, action, danger, glimpses into an exotic world, and, in the end, tragedy. In 2006 underwater archaeologists found the remains of Bellamy’s ship, which sank off the coast of Cape Cod in 1717. Among the wreckage were the bones of a boy of about 12. So King was on the ship for a year, and there’s no doubt his adventures during that year could pack a ripping non-fiction book. Only, we can’t know what those adventures were. With great reluctance, a writer of non-fiction has to pass on John King. Maybe put it on the list of historical fiction to write some day.

Then there’s the tantalizing tale of Elijah Nicholas Wilson, another adventure-seeking 11 year old. In the early 1850s, Wilson ran away from his frontier home (he was sick of herding sheep) to live with a Shoshone chief named Washakie and his family. He learned the language, learned to hunt buffalo like a young brave, and, best of all for my purposes, wrote a memoir called White Indian Boy, describing his years with the Shoshone.

f exciting moment, I became convinced this had the makings of a fantastic kids’ history book. And Wilson’s book does have a lot of great stories, but are they the right stories? Well, Wilson comes across as kind of a jerk. He’s constantly fighting with other kids; he nearly sparks an intra-tribal war by smacking a girl in a squabble over a fishing pole. Though actually, these kinds of details make him sound like a real kid, which is a good thing.

The bigger issue is the one Herodotus spoke of, the fact that Wilson’s stories just don’t happen in the right order, or at all. That is, he gives us lots of brilliant slice-of-life scenes, but no narrative arc, no climax. He spends a couple of years with the Shoshone, then leaves for what he thinks will be a short visit home, and never returns to his Indian family. He goes on to have other adventures, including a stint as a Pony Express rider, but that’s another chapter of his life, and, quite unreasonably, not the part I care about. I really wish I could “correct these defects” by having Wilson marry a Shoshone girl, or help lead his adoptive people’s struggle to hold onto their traditional lands.

Or has my thinking become too Hollywood? Am I missing the more important point: that real life, meandering and messy, is more interesting than a perfectly structured plot? I don’t know. I just know that every time I visit a school, kids tell me they think history is boring. Now that’s a defect we definitely have to correct.

Well, one thing that IS too Hollywood in your thinking is that he (white) would rescue the Indians. That's a common theme. What would we do (I'm Native) without the help of all those reformers who wanted to help us??!! Another way of thinking about all of this is that we're still here today in spite of the ones who wanted us gone, AND in spite of those who wanted to "rescue" us from our "savage" existence.

Americans have "learned" this very well. One thing I'm curious about is that word---brave. You used it in your post:

"He learned the language, learned to hunt buffalo like a young brave..."

Why don't we just say "like a young Indian man" instead? I'd like to know how/when "brave" became THE word for male Indian, and, who started using that word.

Any thoughts on that?

Good points. It's so easy to get caught up in trying to find a great story, that the bigger picture gets lost. The word brave is used in Wilson's book, which was published in the early 1900s.

I'm curious, what are some of your favorite sources describing Native American life from an Indian perspective?

I publish American Indians in Children's Literature (AICL)---a blog and resource. I'm a former schoolteacher who has been teaching on the faculty in American Indian Studies at the University of Illinois for several years.

So---tho it feels a bit odd to say that a favorite source is my site, it IS something that I love working on.

During grad school I learned a great deal from the people at Oyate.org.

I will also hasten to add that I'm a tribally enrolled Pueblo Indian woman from Nambe Pueblo in northern New Mexico.

Thanks for letting me know about your blog. It looks like a great resource, and I'm glad to know about it!
- Steve