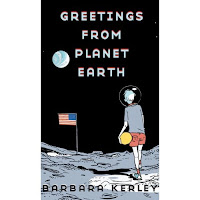 A few weeks ago, I took part in a videoconference to discuss my novel, Greetings From Planet Earth. The students asked a lot of great questions, and then I did a short presentation.

The novel is set in 1977, just before the launch of the Voyager space probes. Each probe carries a Golden Record, a message—in pictures, music, and greetings in 55 languages—from Earth to (hopefully, one day) a being in space.

In the novel, a boy named Theo works on a class project in which the students create their own message from Earth, trying to answer the question, “What does it truly mean to be human?” But as Theo searches for his answer, other questions begin to surface at home: What happened to his father in Vietnam? Where is he?
On the surface, much of the story deals with war. I was a kid during the Vietnam War, and my best friend’s dad served there for years. And I worked on the novel from 2002 through 2006, when America had just entered into two wars.

But while the story of the novel revolves around war, the theme of the novel is peace—and that’s what I talked about during my presentation: peace, and how an author may explore the same theme in many different books.

Many authors have themes they return to, again and again, over the course of their career—a theme that compels them, that they want to explore. A theme that resonates in the stories they tell. 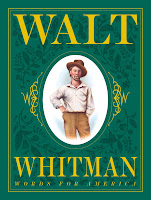 other books during the four years I worked on the novel, both of them nonfiction. And while all three books, laid side-by-side, might appear very different, they are all about peace.

One was the biography Walt Whitman: Words For America. It is the true story of the poet’s years as a volunteer in the Civil War hospitals. Walt was deeply upset when the Civil War threatened to split America in two and even more moved when he met the soldiers who were wounded in the war. And so, he looked for a way to help heal the country and heal the soldiers.

Walt wasn’t trained in medicine, but there was much he could do to nurse the soldiers back to health: bring them small gifts like newspapers and fruit; read to them and write letters home to their families; sit quietly offering comfort. Many soldiers later said that Walt’s nurturing and comforting presence saved their lives.
And so, while the book takes place during wartime, I see it as a book about healing and a book about peace. (There is one particular day of working on Walt that I will never forget—the day of “Shock and Awe.” As bombs rained down on Baghdad, I was up and down the stairs, from a tv tuned to CNN back up to my little office, working on this book about a big-hearted man who did what he could to try to heal a country at war.)
The other b 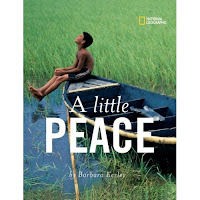 ook I wrote during that time was the nonfiction photo-essay, A Little Peace. In simple words supported by beautiful National Geographic photographs, it shares the message that we all—each and every one of us—have the power to make the world more peaceful.

Three books: a novel, a biography, and a photo-essay. The books couldn’t look more different on the surface, and yet they share a common theme. I expect I will continue to explore the theme of peace in future books.

Many authors whose work I admire also explore a theme in many of their books.

dy (and fellow INKer) Deborah Heiligman, the theme is the intersection of religion and science. “I think that what I am really exploring when I write about religion and about science,” she said, “is how people try to make sense of the world. And people do that in two major ways—through science and/or through religion.”

Deb explored this theme most recently in the brilliant nonfiction book, Charles and Emma, winner of all sorts of awards. And if you go on her website, you’ll see that she has been exploring science and religion for much of her career. 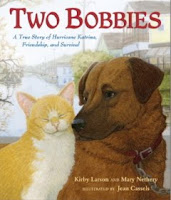 y writing buddies, Mary Nethery, is passionate about animals. “I’m exploring the belief that animals are sentient beings with life purpose, who, if we listen, help us to show our goodness,” she explained. “They deserve our respect and full protection.”

Mary has written many books about animals (check out her website!), including the award-winning nonfiction title Two Bobbies: A True Story of Hurricane Katrina, Friendship, and Survival, coauthored with Kirby Larson.

Looking at an author’s body of work reveals a lot about the issues they think are important. And reading those titles that explore a common theme helps all of us begin to understand the big questions we all ask—and the ways we might answer them.
Posted by Barbara Kerley at 4:24 AM

Great posting, Barbara! Now you've got me thing if I've got a recurring theme in my very different books. I may blog about that sometime when I figure out the answer.

It is interesting to ponder this -- I think it helps you tap into what is really important to you. And that can only make all of us better writers, yes?

Great post, Barbara. And boy is it timely for me. I've been pondering this question myself as I tried to decide whether or not to take a project that was recently offered to me. In the end, I decided to pass. I'd say all my books are about sharing the beauty and wonder of the natural world with readers, about sharing my own fascination. This new project just didn't feel right.

The teachers I work with and I are super-fans of the National Geographic books you did. They are GORGEOUS. We use them as read alouds, and as mentor texts for reading and writing workshops!

Melissa -- I know what you mean about trusting your gut. Ideally we'd never pass on any worthy project -- but in reality, there is only so much time in a day (a year, a career) and it makes sense to pursue the projects you feel most passionate about. A different author with different passions will do a wonderful job on the book you passed over -- and in the meantime, you'll have done a wonderful job on a project that truly speaks to YOU.

TinyReader -- Thanks so much for letting me know this -- it really makes my day!

Great post, Barbara. I too see the recurrent themes in my work. In my fiction: what does it mean to be heroic? How are we heros in our regular lives? In my nonfiction: science is an adventure.