This past week I had the pleasure of meeting Mike Venezia as he spoke at the Art Volunteers In the Classroom Workshop sponsored by the Fox Valley Associates of the Art Institute. I have attended the workshops for eleven years but I was excited to hear what Mike had to say about presenting artists to children. Who hasn't seen or picked up one of his "Getting to Know the World's Greatest Artists" books while researching about an artist? We can all recognize the popular cover graphics and signature Venezia cartoon style. 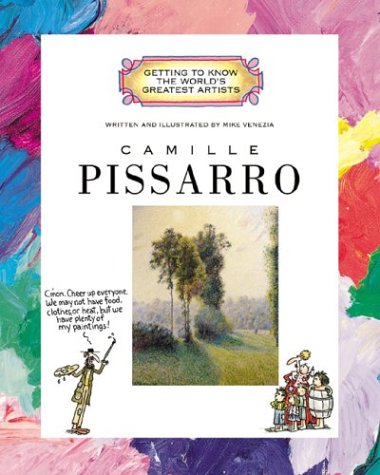 Mike started the lecture by talking about one of my favorite creativity advocates: Sir Kenneth Robinson. I wrote about and posted the TED talk by Sir Ken Robinson in my blog post last January on Nonfiction for Teens to Ignite a Creative Spark. Again, if you have 20 minutes to watch it, please do.

Mike explained that in second grade he had a sense that art was one of his strengths. A strong influence in his early education was his fifth grade teacher, Mrs. Harris, who made the class create drawings of maps the entire year. Many of Mike's books now contain fun maps to help illustrate information about a person. Mike's high school art teacher, who could see Mike's talents as an artist, talked him into applying to The School of the Art Institute of Chicago. His favorite part of art school was wandering into the Art Institute and studying the artists, which he was able to do three to four times per week. Some of his favorites were Night Hawks by Edward Hopper (a piece in our school's traveling collection this year), American Gothic by Grant Wood, and The Assumption of the Virgin by El Greco.

After art school, Mike worked for Leo Burnett Agency, one of Chicago's largest advertising agencies. Mike's wife, Jeannine, explained to me that she needed Mike's help with her Picture Lady presentations. She volunteered at her children's school to present the Picture Lady artists but she had no art background. With Mike's help, she was able to create a presentation that the kids could relate to. While working at Leo Burnett, Mike wrote and illustrated the Getting to Know the World's Greatest Artists Series on the train or in hotels. The first two books in the series were Picasso and Rembrandt. Mike recently retired after 33 years at Leo Burnett to work on his books and videos full time.

Mike explained that his illustrations and cartoons are not just gratuitous drawings. He makes the drawings approachable for kids and tries to tie the illustration into the artist's life in a fun way. In an illustration for the Georgia O'Keeffe, he showed us that he illustrated a scene from Georgia's childhood where she was so curious about natural things and the earth that she decided to eat dirt. What a fantastic way to show this to children! We all know how natural Georgia O'Keeffe's art is and this an excellent example to for children to relate. Of course, Mike adds wonderful humor with the animals expressing their take on the taste of the dirt.

By showing examples from his Getting to Know the World's Greatest Composers Series, Mike showed how the illustrations were a little harder to tie into the composer's life story. With Duke Ellington, Mike illustrated a humorous take on the sounds within Ellington's apartment building influencing his music. With Peter Tchaikovsky, Mike showed how it "may" have looked if the symphony shot off the canons indoors. And, with Beethoven, Mike placed Beethoven outdoors directing birds. All perfect examples of using fantastic, humorous visuals that kids can relate to and they will hopefully remember
forever. 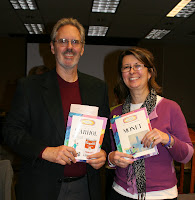 Finally, I have to mention, when I talk to Art Volunteers, I point out that someday a student may win Jeopardy and mention the volunteer's name because of what they have learned in an Art Volunteer in the Classroom presentation.
From this week's Jeopardy:
Double Jeopardy category: Night in the Museum
$1600 Question: In Rousseau's "Sleeping Gypsy", a full moon hangs in the night sky while this animal catches the scent of the title figure
Answer: Lion
(Kevin missed this question and it may have led to his downfall. No one else answered.)
One of the pieces in our school's collection this year is Henri Rousseau's Sleeping Gypsy. At least our students would get that question right.

Remember October is National Arts and Humanities Month!
Posted by Anna M. Lewis at 9:00 AM

I'm so glad you got to meet him. Excellent use of your research skills to get the interesting tidbits from his wife. And thanks again for all of the of the underappreciated work you do bringing art into the classroom.