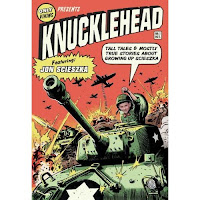 We don’t get to talk about him much on this blog—his Honorary Wackiness, National Ambassador for Children’s Literature, Silly-Silly Fiction Writer: Jon Scieszka. But now, by way of explaining where he gets his book ideas, he has written his autobiography— Knucklehead: Tall Tales and Almost True Stories of Growing up Scieszka—and that makes him eligible for some I.N.K. loving. Six brothers, Catholic school, the 1960s, a genius sense of humor—some great material here for a future writing career. The text, speckled with photos and scrapbook items, is broken into 38 little essays. Many of them sparkle with the polished wit of a Dave Barry or David Sedaris—especially those essays with nuns, like “I Swear” and “What’s So Funny, Mr. Scieszka?” In the latter piece, young Jon makes the momentous choice to incur the wrath of Sister Margaret Mary by entertaining the rest of the class with a joke—and the rest is history. Aimed squarely at reluctant boy readers (Viking, ages 9-11). 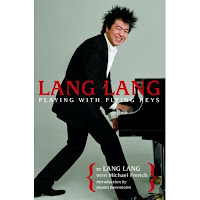 Anyone who saw him play piano at the Beijing Olympics opening ceremony will be fascinated by Lang Lang: Playing with Flying Keys, an autobiography written with Michael French. Search for “Lang Lang” on YouTube, and be intoxicated by this Chinese master of Western classical piano music. No superlative is too super to describe his showy technique and pure emotion—think Chopin, Liszt, Beethoven-- and he’s still only 26. His life is a harrowing mythical journey from being a child without a childhood—a prodigy in a poor family, with a loving if strict-unto-abusive father-- all the way to rock-star-like fame and fortune. Along the way, readers will absorb a considerable amount about China, its history and culture, as well as the power of all kinds of music, particularly classical. A recent New Yorker reports that 40 million children in China are currently studying piano—the “Lang Lang effect” that could easily migrate here (Delacorte, ages 9 and up).


For a jewel of a picture-book biography, dive into the sea with Manfish: A Story of Jacques Cousteau. The famous French oceanographer started out as a little boy pulsating with curiosity—about the qualities of water, the mysterious creatures below, whether a human could ever learn to breathe underwater, how a camera worked, how to make movies. Above all, how could he become a manfish—“to swim through the sea as free as a fish.” The story of how he does just that, creating beautiful films that inspire others to take care of the oceans, is told with poetic economy by Jennifer Berne (in her first book for children!). French artist Éric Puybaret paints wondrous, fluid images to match (Chronicle, ages 4-7). 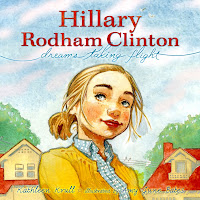 Wiser minds than mine might have predicted this, but while Fartiste came flying through with some great reviews, my Hillary Rodham Clinton: Dreams Taking Flight is taking a beating. Possible reasons? Lots of free-floating Hillary hysteria going around; the book came out as the same time as books on Obama and McCain, which makes cynics suspect we authors are in some way cashing in; and perhaps it’s possible that I wrote a bad book. Fortunately, Richie Partington likes it. I’m still in awe of Amy June Bates’ uncannily accurate depictions of Hillary in all the stages of her life. And I stand by my statement that the book was written in all sincerity (Simon & Schuster, ages 5-10).
Posted by Kathleen Krull at 3:15 AM

Thanks so much, Jeannine. Just got to know you through your website....Yet another misunderstanding of the book in today's National Post (Canadian newspaper). But stay tuned - some great news might be coming later today.

I read a boxed review in PW of the three canidate books together, and the only one I bought for our library was Dreams Taking Flight, because it seemed to be the most interesting and subjective title of the three(no sucking up too much, am I?)

I am sorry to hear this. I try to buy all the books I can on women for my daughter. Although my daughter is young I am building a library for her.
I hope, Ms. Krull, that you write a series on the women presidents around the world. I want to show my girl that she too can be president. Ireland has Mary Robinson and Mary McAleese, Germany has Prime Minister Merkle, Finland, Liberia have female presidents. The list is long.
Additionally, a book for girls on Hillary's work as Sec. of State is needed.
A UN study came out in August of 2008 - Who Answers to Women. It talks about the gender equity in parliaments around the world (The USA ranks 57 in gender equity in government.) and how when women are equally represented in government women do better in that country.
Our girls need the role models.

manfish is amazing. thanks for the review. and i love the illustrator amy june bates. yeah! love your blog. smiles!!

I just bought this book and your new book The Brothers Kennedy: John, Robert, Edward and loved them both!! I am in the teacher education program and will graduate in May. I am so glad I am able to start my classroom library with some of your books. I love history and I can't wait to see more of your books!