Craig Cary, a biologist at the University of Delaware, was riding the crest of the Extreme project, a small outreach program that had ballooned from 50 Delaware schools to 350,000 students in just four years. Extreme classrooms learned about the hydrothermal vents in the Earth’s crust miles beneath the ocean’s surface, where scientists diving in the little submarine Alvin had discovered gardens of life that were fed on chemicals, and didn’t need light (and photosynthesis) at all.

I called Craig to learn how Alvin navigated, for my book Across the Wide Ocean (Greenwillow, 2007). The call was a godsend to both of us. Craig needed somebody to write a curriculum for Extreme 2003. And I needed a few words about Alvin. I wound up with a whole lot more than a few. And I’m still trying to figure out what to do with them.

In the end, two pages out of eighty in Across the Wide Ocean involved Alvin. It was a book about something else: navigation, not submarines or the deep sea. But my masses of info about Alvin quickly grew to the point where my cup ranneth over. I wrote Extreme 2004 curriculum and printed materials, and, at the last minute before the ship left, I was invited aboard Atlantis. Craig needed someone to go on the month-long cruise to the East Pacific Rise, a site of hydrothermal vents, and to send back daily reports, interviews, and pictures of everything that happened, so kids could follow along. Would I?

You bet! I For four weeks I slept in a berth with two pillows to keep me in (the ship rocks a lot), and spent my days chasing after scientists and crew to chronicle what they did all day. One day I took my own dive to the bottom of the sea.

It was incredibly dramatic. I want to tell the story. I am the only children’s author to have dived in Alvin. And yet, plenty of books have already been written about Alvin dives. They all have photographs, and some scientific-looking diagrams. They’re full of the excitement of adults who do cool things that seem much less accessible than the ones on Mythbusters. And despite the fact that kids are gaga for Alvin, none of them has been a great success. I want to do something different, and I’m trying to figure out how.

I begin with illustrations. When I was at sea one day I drew a big circle that covered a spread of my journal. Almost center (just shy of the ditch) I made a dot, and labeled it Atlantis. We were so far from shore that for four weeks we never saw evidence of humans – no boat, no plane crossed our perfectly round horizon, and no matter where the ship went, we were always at the center of our world. Back on shore, I returned to that picture, knowing that I wanted to convey this kind of sensibility in whatever book I made about my Alvin dive. I wanted to show not only the science, which is great, but also the feelings: the weirdness, the stomach drops, the loneliness, the heartstopping gorgeousness. 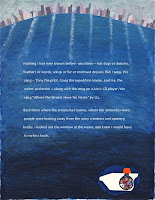 I am still struggling with it. Here you can see a sample page from what may eventually be the book. In it, I’m in the little sub at the bottom, with Tony and Craig. We are singing along with the CD player, Craig’s favorite song for the bottom of the sea, U2’s “Where the Streets Have No Name.” At the top of the picture is the New York City skyline, the environment I had abandoned temporarily for this one.

This picture is one side of a spread. The other side will show me as a child, walking to school. My route to school was exactly a mile. There and back, it was two miles: the distance from surface to sea floor, where Alvin dives.

I have workshopped this picture and text a little bit, and the discussion mostly centers on point of view. The voice in this sample is mine – a 44-year-old woman. Problem? Well, most experts would agree that it could be. “Can’t it somehow be a child’s voice?” was one suggestion. But whose? The child of the 44-year-old woman? My mother dove to the bottom of the sea and all I got is this lousy narration job?

I suggested, “What if the voice is Alvin’s?” That’s intriguing, but honestly, I don’t know if I could sustain it. I keep thinking of I Stink, and applying that wonderful garbage truck voice to this high-tech little submersible – the one that discovered the Titanic, the one that has been part of enormous scientific discoveries since the seventies – and hearing its voice as I Sink. And then there’s another issue: the new Alvin being built now to take over the diving duties with a brilliant design that will made nearly all of the ocean floor accessible to exploration. How do I go from old Alvin’s voice to new Alvin’s without some kind of death and resurrection scenario?

In the four years since my Alvin dive, I’ve worked on this slowly and – mainly – been consumed by other business. Not sure whether my book idea was viable, I’ve back-burnered it, focusing on finishing Across the Wide Ocean and the four very different books that are coming out in 2009 – not an ocean science book among them. Meanwhile, I go to schools and show pictures from my book and from my trip, passing around sulphurous rocks from the sea floor, and holding up styrofoam cups shrunk by undersea pressure, like thimbles on my fingers. Children and adults alike are rapt, engaged, enthusiastic.

I have to do something more with this. Unable to contain my own curiosity, I recently went to Woods Hole to learn about the plan for the new Alvin. In an industrial building outside Milwaukee, the titanium hull of the new Alvin has just been magnificently forged. It even made the cover of the New York Times science section.

It’s new, and newsworthy. And I’ve just gotten some other news. Extreme 2008 is ready to go. In November, I’m going back to sea with (good) old Alvin, Atlantis, and my friend Craig Cary. Once again I’ll be gathering information and sending it back to shore. I’ll be considering things from a kids’ point of view, maybe; from Alvin’s point of view, could be; and from my own perspective, taking notes on what I see and think and feel, for now. Will it become a book one day for real? I hope so.
Posted by Anonymous at 9:32 AM

Thanks, Karen. I love hearing about authors' creative processes. That's why I like the "special features" of movies on DVD. The "making of" and directors' commentaries are often as interesting to me as the movie itself. Good luck with your fascinating project!

We met as presenters at the Fish Tales, Tugs & Sails event in 2007 (I have a nice picture of you signing my son's copy of ACROSS THE WIDE OCEAN).

I enjoyed reading this post and can completely relate to the days, weeks and (gulp!) years of rumination that are required to bring some book ideas into focus. You have a fascinating, important story to tell and I am sure you will come across the key to telling it. Probably when you are not even looking...