In the world of nonfiction for young people, California librarian Jonathan Hunt is one of my gurus. His reviews and essays are always incredibly insightful, and his latest article in Horn Book is no exception.
His thoughtful look at readers of children’s and young adult nonfiction comes on the heels of two recent experiences, the Texas Library Association annual conference and the upcoming paperback publication of my book Bootleg: Murder, Moonshine, and the Lawless Years of Prohibition. 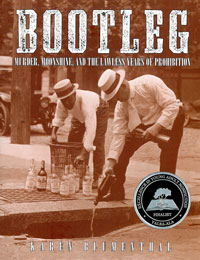 I was at TLA because Bootleg is part of the new Spirit of Texas Middle School program, which recognizes authors with a Texas connection. In addition, my book Steve Jobs: The Man Who Thought Different is on this year’s Lone Star list for middle-schoolers, and I had a chance to visit with some of the amazing librarians who devote their precious spare time to reading and picking books for these lists.
One of them surprised me with her description of her readers. Her middle school students are “insulted” by heavily illustrated nonfiction and almost shun them, she told me. Instead, they gravitate to smaller books like Steve Jobs because it’s neither too thick nor too thin, and it is sparingly illustrated.
Hunt said almost the same thing in his essay, noting that “too many photographs can rob author and reader alike of the opportunity to exercise their imagination.” 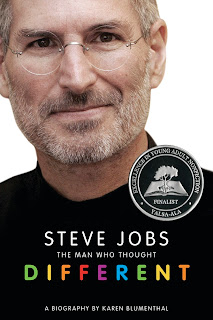 As an avid nonfiction reader who would appreciate more photos and relevant images in adult books, I always assumed illustrations brought a greater depth and visual dimension to a true story. But they have another side effect: To properly display images, nonfiction children’s books are somewhat larger than fiction books, which gives them the appearance of either picture books (babyish!) or coffee table books (and who wants to actually read those?)
In fact, Hunt makes the case for smaller “novelistic” book sizes for factual stories, saying that they circulate easily in his library, without any special selling from him.
That’s encouraging news for Bootleg, which is the first of my four books for young people to go from hardcover to trade paperback.  (Steve Jobs was published simultaneously in hardcover and paperback.)
Lauren Burniac, who oversees the paperback imprint Square Fish, says the Bootleg paperback, which will be out in late July, will be smaller in size than the original, which itself had a smaller trim size than many contemporary nonfiction books.
While many young adult and children’s novels are published in paperback about a year after their hardcover publication, few nonfiction books make the leap. But with Common Core Standards calling for more students to read nonfiction and with school and library budgets tight, Burniac says that roughly a quarter of her paperback list is now nonfiction, up from just two or three titles before.
“We’re making a real effort to bring nonfiction into paperback,” she says, with the hope that a lower price will bring the books not just into libraries, but also into classrooms.  (And, I hope, maybe on to home bookshelves!)
Will a paperback nonfiction book in a smaller size attract more buyers and more readers?
Or does that old publishing saw hold, that people choose fiction for the authors and nonfiction for the subject?
What do you think?
Posted by Unknown at 4:00 AM

Interesting, if sigh-inducing insights...if it's true that size and/or number of images can determine whether a book gets read or not, it's certainly something authors and publishers should consider. If a book is in electronic format, the size won't be an issue at least!

Hi, Karen. Welcome to I.N.K. I'm currently working on my first nonfiction book that won't have a lot of photos, and I must say, it's a strange feeling. I thought the Common Core placed a value on the inclusion of photographs and artifacts in nonfiction books. As a former reluctant reader myself, I certainly appreciated information that was presented visually. At any rate, good luck with the Bootleg paperback!