It is Women’s History Month and I am happy to be celebrating it with my new book about a very important woman. Who Says Women Can’t Be Doctors? The Story of Elizabeth Blackwell, is about the first woman doctor in America. I wanted to do a picture book about her for some time, and finally got the chance to with the brilliant Marjorie Priceman, who has done a priceless job of bringing this piece of history to life with her illustrations.

I am just starting to get a chance to interact with kids and other readers for this book, and am having a ball. On World Read Aloud Day, I Skyped with a whole bunch of students who wanted to know all about Blackwell! And in New York City, I was invited to do a book signing at the annual meeting for the American Medical Women’s Association, where every year they give one woman doctor an Elizabeth Blackwell Award in recognition of her contribution to the cause of women in medicine. Talk about a building full of powerful women! Wow. And were they ever enthusiastic about this book! They wanted copies for their daughters, nieces, granddaughters—and for their waiting rooms. And get this—three different women told me their young sons think that ONLY women can be doctors, since that is what they see!

My travels also took me to Washington, D.C., where the other Elizabeth in my life was remembered. That would be Elizabeth Cady Stanton, who I wrote about in Elizabeth Leads the Way. She jumpstarted the suffrage movement at Seneca Falls. It took more than her lifetime, but women finally got the right to vote and the 100th anniversary of the 1913 march was celebrated while I was in town. Fellow writer Penny Colman and I were able to meet up for this incredible occasion and march on that very cold morning with her lovely granddaughter. 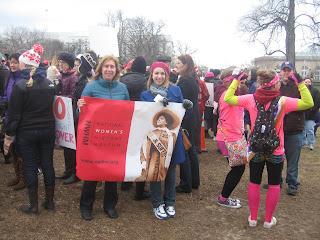 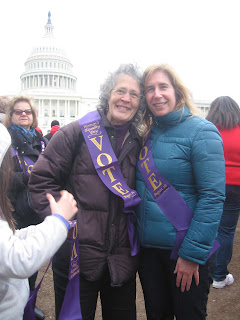 All hail the Elizabeths—Blackwell and Stanton—for their unwavering determination, tenacity, and commitment as we celebrate Women’s History Month this March.

Congrats Tanya! And I just received an email from Common Sense Media this morning with their list of recommended STEM apps. And guess what was on the list? Your companion app for the book. I hope this link works: http://www.commonsensemedia.org/website-lists/stem-apps-tv-and-more-for-science-tech-engineering-and-math?utm_source=edu_news&utm_source=2013_03_Newsletter_2&utm_medium=email&utm_campaign=weekly

Yay for Elizabeths! I'm one and I love Blackwell and Stanton too. Great books and great choice of subject. Congrats!