Just Cuz It's a Fact, Doesn't Mean They'll Believe It 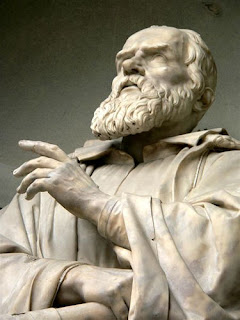 When Galileo discovered the moons of Jupiter in his telescope, he couldn’t wait to share the news with the world. So, in 1610 he hurriedly rushed The Starry Messenger, the story of his discovery, into print. Now, in those days they didn’t have talk shows, so, to promote his book, Galileo took his telescope to dinner parties and invited the guests to see Jupiter’s moons for themselves. Many refused to look claiming that the telescope was an instrument of the devil. They accused Galileo of trying to trick them, painting the moons of Jupiter on the end of the telescope. Galileo’s response was that if that were the case they would see the moons no matter where they looked when actually they could see them only if they looked where he told them to look. But the main objection was that there was nothing in the Bible about this phenomenon. Galileo’s famous response: “The Bible shows the way to go to heaven, not the way the heavens go.”

Galileo is considered the father of modern science, now a huge body of knowledge that has been accumulating incrementally throught the work of thousands of people. Each tiny bit of information can be challenged by asking, “How do you know?” And each contributing scientist can answer as Galileo did to the dinner party guests, “This is what I did. If you do what I did, then you’ll know what I know.” In other words, scientific information is verifiable, replicable human experience. Science has grown exponentially since Galileo. It is built on a huge body of data and its power shows up in technology. The principles that are used to make a light go on when you throw a switch were learned in the same meticulous way that we’ve come to understand how the carbon dioxide levels in the atmosphere have risen over the past 100 years leading to ominous climate change or that Darwin was right, and living species are interconnected as “Islands in a sea of death.”

Yet there are many who cherry pick science—only believing its findings when they agree with them.

Documented proof doesn’t fare much better. Despite the recent publication of President Obama’s questioned-by-some birth certificate, there is still a percentage of the population that refuses to believe he was born in the USA.

We’ve spent a lot of time in this blog discussing the rigors with which we verify the accuracy of thematerial we write about for the nonfiction world. Personally, we can enjoy the satisfaction of knowing we are dealing with facts and we are careful to mention that when the facts are in dispute, that too is a fact. Yet, there are still those who are not convinced.

What’s going on here? Believe it or not, science has taken a look at so-called “motivated reasoning” where people rationalize evidence that is not in keeping with deeply held beliefs. Here are some of the findings:

And finally the conclusion: “If you want someone to accept new evidence, make sure to present it to them in a context that doesn't trigger a defensive, emotional reaction.” In other words, sometimes a direct approach to the facts is NOT the way to go. The challenge for us writers is a human one—to be able to read our audience so that we can sugar coat the “medicine” to make it easier to go down.

BTW: keep an open mind about this.

It's a cliche, but some things never change, do they? Great Galileo anecdotes. Always liked this one from John Adams's writings:

"Facts are stubborn things; and whatever may be our wishes, our inclinations, or the dictates of our passion, they cannot alter the state of facts and evidence."

Great post, Vicki, and a great reminder to non-fiction authors (who tend to believe in evidence-based conclusions) that an abundance of facts supporting a viewpoint does not necessarily mean an abundance of agreement with the viewpoint. Look at what happened to Galileo: he was thrown in prison for proving that the Earth was not the center of the universe!

Thanks Christina, Ella and David for your comments.
Today, President Obama declined to release the gory photos of a dead Osama bin Laden. I heard a pundit say that he'd seen the DNA evidence and didn't need a photo for more proof. For those who are skeptical about bin Laden's death, I'm sure Obama reasoned, a photo would not be irrefutable. And as the days go by, without directives to Al Quaeda from bin Laden, his non-believing followers will get the message. Our president has certainly learned his: you can publish the truth and those who remain unconvinced are out of your control.