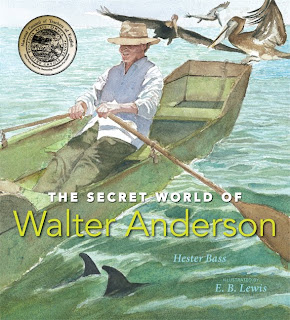 When Ballet for Martha: Making Appalachian Spring received the Orbis Pictus Award, Hester Bass, whose book wom last year's award, wrote me a note of congratulations. I immediately read The Secret World Of Arthur Anderson, a book about an amazing artist from Mississippi, a story that needed to be told. And what an eloquent and moving story it is through Hester's words. She agreed to be a guest blogger this month and I hope you will enjoy reading about her amazing journey to become a writer.
25 Years, a Long Weekend, and a Day
- Hester Bass, author of The Secret World of Walter Anderson

I am often asked: where do you get your ideas? I often answer: on sale at Target. (Cue the rimshot.) I am also often asked: how’d you get your book published? Short answer: Perseverance. Long answer: Every book is a journey and what propels us, as creators and readers, past every setback and distraction to reach “The End” is falling in love with an idea. My journey with one idea involves 25 years, a long weekend, and a day. (Nobody ever said that writing and publishing would be quick or easy.)

The seed for The Secret World of Walter Anderson was planted in 1982, when my husband and I were introduced to this artist by a friend who sent us an article from Horizon magazine. (We’ve misplaced our copy; if you have it, I’m interested.) We were smitten with Anderson’s art, his adventurous life, his pure joy for nature. Ten years later, we visited the Walter Anderson Museum of Art in Ocean Springs, Mississippi and four years after that in 1996, we moved our family to this art colony by the sea.

At the museum, I saw how children leaned into the tale of a man who rode a bicycle, drew expertly with crayons, and had a pet raccoon. My wish since childhood to write bubbled up, and I began to hold meetings with my computer as if we were the only two members of a secret society.

I read Anderson’s journals, books by his wife and others, talked to everyone I could find who had studied Anderson - his children, curators, anyone who might help me get the gold out of this mine - and wrote the first draft in 1999. In 2001, after an exhaustive publisher safari, I sent the manuscript to a hand-picked editor whose personal background and list seemed a perfect fit. It was returned unopened.

I moped around for a while, then promptly joined SCBWI and moved on to other projects, which included applying to game shows. In 2002, I was a six-figure winner on “Who Wants to Be A Millionaire” and decided to make that life-changing money, getting seriously serious about writing. My first book, So Many Houses, was sold to Scholastic in 2004 and came out in 2006. I was positively giddy to be published.

I was about to spend some of that Millionaire money to attend the 2006 SCBWI summer conference in Los Angeles because my favorite writer was going to be there when I won an all-expenses-paid trip to California, where I met him by the pool. (Sometimes I think that when an idea’s time has come, a writer has to hold on for dear life; things can happen pretty fast.) A gracious conversationalist, this Newbury winner asked me a fateful question: What was the one book I most wanted to publish? I had a ready answer.

Long story short, this celebrated author offered to read my Walter Anderson manuscript and, if he liked it, help get it into the right hands. I can scarcely believe this actually happened to me but believe me when I tell you that this could happen to you. If you are bold and brave and speak the unrefined dreams of your heart, you may get to watch the wheels of the universe pivot on ideas, and the world will be better for your efforts.
Back at home - which by now was Huntsville, Alabama - I spent a long weekend revisiting my manuscript and the work was so intense that I was consumed by it; literally, I lost 8 pounds. I was attempting to remove the safety equipment and dive into that deep well where my truth dwells, pouring 25 years’ worth of ideas onto the page once and for all.

Something worked. Within two weeks, I had a culmulative tale of a mentor and an agent and an editor and a contract. Illustrated by E. B. Lewis. Published by Candlewick Press. Dreams do come true. Mine. Yours. Make it happen. Go there.

Then on a January day in 2010, The Secret World of Walter Anderson won the NCTE Orbis Pictus Award for Outstanding Nonfiction for Children. I screamed when I found out. All kinds of new readers would now discover Walter Anderson and could be encouraged by how he struggled to follow his dreams and the beauty he left behind. The book received other accolades and 2010 turned into a full calendar of interviews, travel, and appearances. Somehow I couldn’t seem to get much writing done until the year was over.

Now the torch has been passed. The 2011 winner of the NCTE Orbis Pictus Award is Ballet for Martha: Making Appalachian Spring, a gem of a book by Jan Greenberg and Sandra Jordan, illustrated by Brian Floca. I wrote to offer my congratulations and Jan invited me to write a guest blog for I.N.K. Thank you, Jan! (I’ve never written a blog post before so thanks for sticking with it till the end here.)

The world of ideas is so rich and full and beautiful, and I’m deep in the fertile mud at the moment. I’m still finding out what kind of writer I am. I concentrated on one story for quite a while, and now I’m working on five at once! Insane or inspired, time will tell. The important thing is: when an idea grabs you, hold on and don’t let go, for no matter how long it takes, there’s me and countless others who want to know everything you know about it and why you love it so. Best wishes in all you do.

What a gorgeous cover and a fabulous story of perseverance! I loved this post and congrats to both of you for the Orbis Pictus Award!

What an honest, moving, and inspiring post! It made me feel fluttery-there is hope, that elusive thing with feathers, for us all.

Thank you for sharing this. I can't wait to read it!!

I love this story and I love The Secret World of Walter Anderson. I am so excited to hear that your creative jets are firing on all burners. Looking forward to what you write next.

What an inspiring story! It should be read by students, writers, want-a-be writers, artists, really EVERYONE.

Congratulations to you both for the Orbis Pictus Award. And thank you for this marvelous post.

Hester, thanks for sharing your story. It's so inspiring that even published authors can take heart! Congrats to both you and Jan on the Orbis Pictus.

A beautiful inspiring read. Indeed falling in love with an idea is what propels me to write, to share and persevere.
Thank you so much for sharing this outstanding interview.