Exploring the thing that makes the light bulbs glow 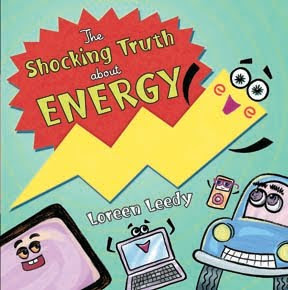 Tomorrow is the 40th anniversary of Earth Day, so it’s nice to be able to talk about The Shocking Truth about Energy (I just received my copies last week.) The characters include a lightning bolt named Erg and a gaggle of household appliances, toys, and tools. With their help, young readers learn how energy can change into many different forms such as heat, light, or electricity. To begin with, kids find out that their own bodies can convert the energy embedded in fuel (food) into motion via muscle power.

A power plant burning coal to generate electricity is shown, then various sources of energy are discussed from fossil fuels to nuclear power to solar, wind, hydro, geothermal, and plant-based (i.e. biofuels) in colorful spreads. 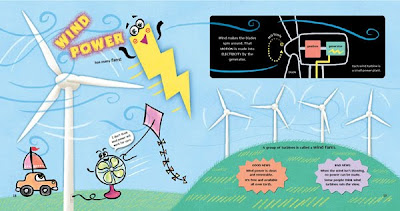 Included are simple explanations of how prehistoric plants and algae became fossil fuels, how atoms are split to release heat, plus multiple ways to capture energy from the Sun, water, and green plants.
One of the most important aspects of this project to me was to include both the positive aspects of each power source as well as the downsides. For example, the good news about fossil fuels is that they are a very concentrated form of energy. The bad news is that they cause pollution, are not renewable, and contribute to climate change (an abbreviated list, by necessity.) The next spread explains how the extra carbon dioxide from fossil fuels causes global warming, and shows the negative results such as higher sea levels, drought, more wildfires, and habitat loss.
Since no energy source is devoid of drawbacks, the final few pages include energy-saving tips because efficiency is one of the largest resources we have. As Erg says, when you save ENERGY, you also save the Earth! A question posed in the end notes asks Does it matter if one kid tries to save energy? Most people agree that it matters a great deal for each one of us, and my hope is that this book can be part of the solution.
An excellent online resource for kids and teachers on this topic (one of several listed in the book) is the Energy Information Administration’s web site for students, Energy Kids.