The Importance of Being Wrong

Here’s a diagram explaining the scientific method in simple terms - I hope whoever owns it doesn’t mind me copying it off the internet. It’s important to define the scientific method, and this diagram does a pretty good job of showing how a scientist might try to answer a specific question. What gets missed in this kind of definition is the way science progresses as much through error as trial. Accepted scientific theories are under constant attack — sometimes, as in the case of evolution, by non-scientists or scientists with agendas that trump their scientific integrity — but more significantly and more typically by other scientists working in related fields. A popular misunderstanding of this dynamic is one of the things that has led to widespread confusion about what a ‘theory’ is, whether or not science is a ‘belief system’ (I suppose it is, but not in the sense that is normally implied by the phrase).

One of the interesting things about having lived for a while (50+ years, in my case) is that one begins to see changes in cultural values and knowledge that might not be perceptible over a short time span. Here are a few interesting examples:

If you unplug the cable from a TV and tune it to no station, part of the snow you see on the screen is caused by radiation left over from the big bang, the moment when all the matter and energy in the universe came into being , some14 billion years ago.

There is a supermassive black hole at the center of the Milky Way galaxy, equivalent in mass to about 3 1/2 million suns. Our sun rotates on its axis about once a month — this black rotates every 11 minutes. We can’t see it, because its gravitational field is so strong that light can’t escape. We know it’s there because of radio waves emitted by superheated matter as it is sucked into the black hole.

To the best of our knowledge, only 4% of the universe is composed of matter and energy as we experience them. Some 22% seems to be comprised of dark matter. The remaining 74% is dark energy. The best we can say about dark energy is that it is a hypothetical force that we don’t understand.

Iridium is an element that is found in relatively high concentrations in some asteroids. In many parts of the world, we’ve found a thin layer of iridium in strata that was laid down 65 million years ago. This layer shows that an asteroid, estimated to be about ten kilometers in diameter, hit the earth with incredible force, causing a worldwide fire storm and sending up clouds of debris that may have been partly or largely responsible for the extinction of the dinosaurs.

55 million years ago the Indian subcontinent, moving north on the Indian continental plate, rammed into Asia. It’s still moving north at a rate of four inches a year. The crash has created the Himalayan mountains, which are still rising at a rate of almost one foot every 100 years.

Something related to the movement of the earth’s crust is the existence of superheated geothermal vents, sometimes called black smokers, on the sea floor. There, living in water than may be hundreds of degrees Fahrenheit, is an entire ecosystem based on sulfur-loving bacteria, completely independent of solar energy. 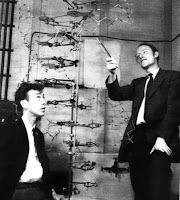 Life is digital. Four letters, AGCT, encode our genome as a sequence of some three billion base pairs on strands of DNA. It would be possible to convert this sequence to 0’s and 1’s, put it on a disk, and at some point in the future, when the technology becomes available, use it create a genetically identical individual.

Each of these seven examples illustrates a theory that has been generally accepted only within my lifetime. Each displaced a previously accepted view, one with many adherents that surely represented the life’s work of many scientists. The process was sometimes painful and confrontational. But when enough evidence accumulated, a new explanation was accepted. Science progresses, in large part, by being wrong. This makes science flexible and allows it to adapt to new information, and it’s the essential difference between science and other systems that try to explain why the world is the way it is.
Posted by steve jenkins at 11:12 AM

Just...wow. What a great and succinct explanation. I could quibble with the scientific method diagram, but a wonderful post. I wish you could turn this into a picture book for grownups!

What? Steve, #7 sounds odd to me. I think I need more information before I believe that. How does one convert four DNA bases(ACGT) to binary (0's and 1's) to clone something? They've already cloned animals and that's not how they did it. This CNN article http://www.cnn.com/2008/TECH/science/11/04/japan.mouse.clone/index.html is interesting about someday bringing back the woolly mammoth (now wouldn't that be cool?)

Great post, Steve. Two books that gets this idea across beautifully are Boy, Were We Wrong About Dinosaurs and the newly released follow up Boy, Were we Wrong About the Solar System, both by Kay Kudlinksi.

Excellent post! It is a good idea for a teacher or librarian to keep some of the old/outdated science books on hand to show children how "facts" can change when we gain more knowledge about a subject. One thing I always told my students to do was to check the copyright year of a book they were using for research.

P.S. It was such a great pleasure to meet and talk with you at the Rabbit Hill Festival.

The importance of beingone wrong is of the founding points of American society that seems to have fallen by the wayside in recent years is earnesty. There is no greater good than being Earnest. When earnesty is lost so too is reality.
----------------------
kesha
link build