"Can Informational Books Be Sexy?"

Sorry, I must gush about our first Fartiste signing, a giddy event at IRA in Atlanta where Paul and I signed books as fast as we could. (I would describe the sensation as like being on drugs, but you would think I’m obsessed, per April 14.) I had talked up the book at the two sessions I spoke at, but most people in line had simply seen the title in the IRA program and had to have it. Yep-- all the laughing teachers and librarians were buying the book for males, a significant percent for their reluctant readers, and another major percent as gifts for husbands... fathers...even grandpas. Paul and I got even fizzier when we learned on site of our first review-- a star from Kirkus in its kindest mode: “Put that tired copy of Walter the Farting Dog away: This long-overdue tribute to Le Petomane, ‘the man who made his pants dance,’ is a total blast.” 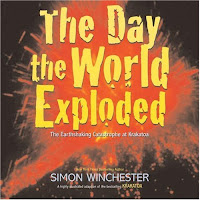 OK, on to hot-off-the-press books by other people, such as The Day the World Exploded. What kid could resist such a title? The subtitle explains all-- The Earthshaking Catastrophe at Krakatoa. It was the most violent explosion ever recorded, destroying the Indonesian island of Krakatoa in 1883. Followed by a tsunami that killed at least 36,00, it became known as the "mother" of all natural disasters. The explosion caused 13 percent of the earth's surface to vibrate, and it actually changed the way people thought about the world. Edvard Munch, to take but one example, was inspired to paint The Scream. This blend of history (of all sorts of things), science (of all kinds), and insights about the meaning of life goes down easy. In full color, it's even easy to visualize, with maps, diagrams, archival photos and etchings, plus dramatic new drawings by Jason Chin. Wherever possible, author Simon Winchester and his adapter Dwight Jon Zimmerman pull in info relevant to today; a second edition will probably mention that Krakatoa is not far from the ongoing disaster in Myanmar. A splendid example of this trend of downsizing popular adult books (in this case, Winchester's Krakatoa) into ones worthy of kids (HarperCollins, ages 10-14). 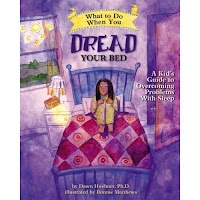 Am I the only one who’s a sucker for self-help books pitched at younger readers? When they’re done well, of course, as in the series of “What-to-Do Guides for Kids.” The newest, by child psychologist Dawn Huebner, is What to Do When You Dread Your Bed, a clever title subtitled A Kid's Guide to Overcoming Problems with Sleep. I would imagine that this 96-page paperback would be particularly handy for therapists and concerned parents (who are addressed in the introduction). But with its language, concepts, and art (cartoony illustrations by Bonnie Matthews) it's actually aimed straight at kids: "Wouldn't it be great if you could climb into bed, snuggle under your covers, close your eyes, and fall asleep without any fuss or fear?" And if you can't? You're not alone. Insomnia, nightmares, fear of the dark, crawling into bed with your parents-- such problems affect one of every three children, according to the author. So here is a workbook full of advice and practical techniques to improve sleeping skills-- an honest, head-on approach to one of life's frustrations (Magination Press/American Psychological Association, ages 9-12). 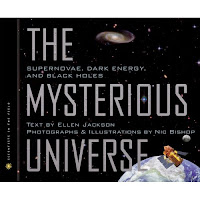 The Mysterious Universe-- yet another tempting title, and what a fascinating science book this is. Subtitled Supernovae, Dark Energy, and Black Holes, this is the newest in the well-received “Scientists in the Field” series. Focusing on the work of astronomy professor Alex Filippenko, who uses the most powerful telescopes ever, this enlightens us on discoveries that are being made right now about the big bang, our expanding universe, time travel, spiraling galaxies, dark matter, not to mention how exciting it can be to be a scientist. Ellen Jackson writes clear, high-interest text (though in some unfortunately tiny fonts, not her fault), with stark black backgrounds making NASA's and Nic Bishop's photos even more dramatic. Includes a thorough glossary for those of us not up on these ultra-mysterious matters (Houghton Mifflin, ages 9-12). 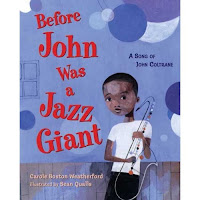 For the very young and the musically inclined (the same thing, really), Before John Was a Jazz Giant: A Song of John Coltrane makes a lovely, lyrical tribute. Coltrane wasn't born knowing how to create innovative jazz with his sax. His childhood was all about listening, lots of listening, to the sounds a child growing up in the South in the 1930s might have heard-- bones knocking around in a grandma's pot, the rhythms of a grandpa's sermons, birds singing, steam engines whistling, big bands on the radio. Carole Boston Weatherford shapes the sounds into a flowing story, while Sean Qualls accompanies her with airy, mixed-media illustrations. A detailed Author's Note gives a full biography and a list of CDs to listen to.

As for today’s outrageous title above and what on earth “sexy” could have to do with the world of children’s books, I refer you to The Craft & Business Of Writing: Essential Tools For Writing Success (Writers Digest Books). It's a brand-new tome that reprints an old article of mine with this question as its title and an elaborate case for an affirmative answer: After you swap out "sexy" for "stimulating," nonfiction clearly rules-- for readers and writers.
Posted by Kathleen Krull at 3:01 AM

Amazon lists it as not yet released. When will Fartiste be available for the rest of us,um,(f)artistic fans?

June 3 is the pub date. But if anyone can make it to BookExpo in LA at 11:00 on Saturday, May 31 - Paul & I will be signing - books are free! - and giving away our specially designed whoopee cushions.