Nonfiction as a Laughing Matter

When I began my writing career, it occurred to me that adding a little humor to my science books might spice them up—not to mention keeping me from writing myself into a coma. Humor proved easy—and popular—to add to whimsical picture books such as Creepy Creatures or Beaks! Writing an entire book as an act of comedy, however, met with, well, um, editorial resistance. Fortunately, I didn’t realize that at the time and launched into what I felt sure would be my most lasting legacy as an author: the first humorous lizard book in the history of children’s literature.

It flopped. I don’t mean the book got published and flopped. I mean that editors looked at it and dropped it faster than a lizard can shed its tail. I’m still not sure why. When penning the chapter “Falling in Love”, for instance, I wrote:

Female lizards usually do the choosing in the mating game. During courtship, males put themselves on display. They drive fancy cars or flash wads of cash. Sometimes they wear gold jewelry.
Just kidding.
Lizards do know how to show off, though. Usually, males climb on rocks or tree trunks in the middle of their territories. Some display bright colors to females to say, "Hey, come and get me, baby!"

When explaining Gila monsters, I wrote:
Gila monsters live in the deserts of the American Southwest. They spend most of their time in underground burrows that they dig with their sharp claws. This allows them to avoid extremely hot and cold temperatures—and keep the glare off of their television screens while watching reruns of Saurian Idol.

What was the problem? I still don’t know, but it took ten years before Judy O’Malley seized the manuscript for Charlesbridge. Sure, it took another five years before the book came out, but fifteen years after I began, the world finally got to see Sneed B. Collard III’s Most Fun Book Ever About Lizards. 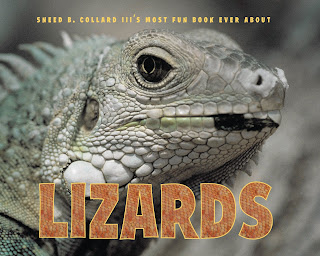 And while the book may not be my most lasting legacy to literature, people do love it. And that should send a clear message to all nonfiction writers: It’s okay to laugh, even in nonfiction.
Of course, not all topics may lend themselves to humor. The Ku Klux Klan, the Holocaust, biochemical warfare, Mitt Romney’s disdain for the middle class…well, these might form a short list of subjects too grave to poke fun at. Most other topics? Fair game. Not only that, humor can lend great insight into nonfiction topics. To demonstrate, I offer an instructive sidebar from my book Pocket Babies and Other Amazing Marsupials:

Name That Poop!
You don’t have to be an expert in scatology—the study of excrement—to identify a wombat’s poop. Wombats poop out dung that is almost perfectly cube-shaped. Their cube-shaped poops nicely match wombats’ cube-shaped bodies. The poops also have a special feature. When they harden, they can be used as building blocks!
So what are we writers waiting for? Grab a pair of poops and get building.
Posted by Sneed B. Collard III at 1:00 AM

Sneed, I feel your pain. Humor just doesn't get any respect and I don't get it either. It keeps kids (anybody) reading, which means that they keep learning. And if they are having fun, they remember what they've read. Yet, how many humorous nonfiction books have ever won an award?

My feeling is that if it's appropriate to the subject, doesn't talk down to kids or over their heads, humor is great.

Sneed, I feel your pain. Humor just doesn't get any respect and I don't get it either. It keeps kids (anybody) reading, which means that they keep learning. And if they are having fun, they remember what they've read. Yet, how many humorous nonfiction books have ever won an award?

My feeling is that if it's appropriate to the subject, doesn't talk down to kids or over their heads, humor is great.