Illustrating Bats and Rats -- and Bat and Rat

When I was asked to do a book about bats and rats (to be called Bats and Rats, HarperCollins 2013), I was quite pleased.  This would be the second of three Humanimal Doodle Books I'm doing for this publisher. For the first time, I'm writing and illustrating books in the style of my Humanimal Doodles science comic, and it's an exciting new challenge.  I knew I'd learn a lot in making the transition from 2- to 6-page articles for middle school or high school to 16- or 24-page books for a somewhat younger audience.

But I was also a little anxious, because a beautiful new picture book called Bat and Rat was just published by Patrick Jennings, with illustrations by Matthew Cordell, and I felt worried that I would seem to be a copycat...copybat...copyrat. I decided to approach the matter head-on, and to determine how the books would be NOT THE SAME AT ALL. To do so, I had to take a look at the goals I'm setting for Bats and Rats, and to find out about the goals of Bat and Rat. 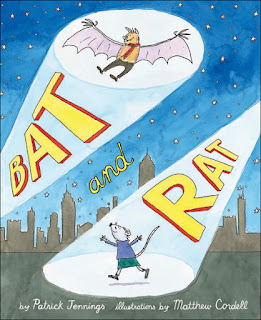 I've been writing nonfiction for many years, but illustrating it -- and really leaning most strongly on the images -- is a new thing for me, so before beginning on my book, I decided to talk to Matt about his illustrations for Bat and Rat and compare our thinking.

Matt: That's cool that you're doing a whole different take on the bats and rats! I would guess your challenges are very much different from mine. Mine were to take two possibly gross or scary (but sometimes cool) night crawlers and humanize them into cool, urban, creative and sweet night crawlers. There was much refining of how to soften the looks of these guys in the beginning. They had to look like a bat and a rat, but a sort of kinder, gentler (and ultimately a kinda 60's beat generation) Bat and Rat.

Me: Did they tell you to put clothes on the animals? I think you gave them a lot of qualities that may not have been in the specs.

Matt:  The clothes and humanizing was all me. Since they were doing very human stuff, I wanted them to look as human-like as possible. And the story has a neat kinda 60's Beat era, jazzy, tinkly vibe to it, so I really took that and flew with it. As far as the styling went, I came up with a few different ideas for what they could wear and we whittled it down over time. They liked my ideas there, but the main thing was making them look less vermin-y and more sweet/friendly. (I shortened the Rat's snout, no big fangs or claws, no shiny black beady eyes, etc.) And the clothes and style certainly helped dial that down.

Me:  Well, this is a major difference.  I definitely have to show the animals as they are -- fangs and all -- although I'm trying to choose images that aren't terrifying or gross.  I'm trying for a cool vibe, too, weighing what the impact of, say, red glowing eyes in a subway tunnel might be on young readers.  So I'll ask, as you've been sharing your books with kids, what kind of response are you getting to these "vermin"?

Matt: They dig it! I think kids (or maybe more so boys) generally think bats are cool (um... Batman!) and rats can be icky but in this context they are cool too. I think a bat and rat make a cool team and it makes perfect sense. Kids have seemed to see it the same way.

Me: Did you change the bat's physical appearance, too?

Matt: A bit, but he was more easy to nail, for some reason, than the rat was. My first take was a really zany and halloweeny looking Bat. Then I made him a bit more youthful and friendly and simplified/sweet.

I actually think bats are rather sweet. Maybe I can show why I think so,  with some facts to back it up.  Also, I have been reading about cool new research on rats that shows their empathy toward other rats, and I'm about to ask the scientist who did that study about the implications of that empathy for wild rats, such as those that live in the city.

While I am not about to put clothes on my bats and rats -- or put musical instruments into their little paws or draw apartments for them -- I realize that I can develop narrative around them that reflects the values in these animals that I want to show to kids, while also using realism and facts to demonstrate why they do things that may have led them to seen as having a dark side.  And all just in time for NEXT Halloween.

Thank you, Matthew Cordell, and congratulations to you and Patrick Jennings on your wonderful book!  Maybe in a year or so our books can be compared side by side. I'd be so honored.
Posted by Karen Romano Young at 12:23 PM

This is a fascinating look into the behind the scenes work of creating a book. Thanks, Karen. And godo luck with yoru bats and rats.