Honor Thy Reader: The Making of a Nonfiction Picture Book

After the longest hiatus in my career, I have a book coming out early next year called This Place Is Cold.  Actually, it’s not a new book.  It is a revised version of a book originally published in 1989 that never went out-of-print.  But after a 24-year run (not bad!) I was asked to take a look at it and cut it so it wouldn’t look so “text heavy.”  (Subtext: today’s kids have shorter attention spans; it must look less wordy.)  I was also to update the relevant information, especially about global warming. The designer would give it a fresh new look but the fabulous art, by my dear friend Barbara Lavallee, still makes this a book anyone would want to pick up. 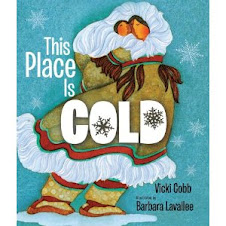 After spending the past three years writing more than ever for blogs, and emails, and other business related projects, the various stages of This Place Is Cold that required my review suddenly made me aware of how much attention goes into the making of a book product for children. It was in stark contrast to my current writing, which is read only by my eyes before it is published.  (Of course, we all know that online publications are only for the moment.  No one expects them to be perfect.)

First, there was the editing—queries from my editor who worked on the revisions script.  Next came the copy-edited manuscript, where I had to respond to tiny details that I thought I had already answered.  For example, I wrote:
“It's no big deal to have a pilot's license in Alaska. One person in every sixty-one has one.”   (The original version said “One person in every seventy-six has one.”) I had to check on those figures twice for two different passes.
I was struck by the care that was taken and the sheer number of times this small book had been read by so many different people.  So I asked one of my editors, Mary Kate Castellani, if she could fill me in on the process.  How many times is a book read and corrected before it is released to the world?  Here’s her summation (my comments in black):

With so many opportunities for the author/illustrator and the in-house editors to check the pages, the book is printed without mistakes.  While an error certainly does happen every once in a while, we always correct any mistakes if and when the book is reprinted.   In my time at Walker, there have been only a handful of errors—usually reported by readers, who do very careful reads of their own!

By my calculations, a thirty-two page picture book of 3,000 words (5 typewritten pages single spaced) is reviewed by at least seven people, each reading it an average of four times—25+ readings before it becomes a book.  Talk about dotting the i’s and crossing the t’s!  This much investment is a statement about honor and pride of workmanship but mostly it is a tribute to the ultimate user—children.  In the writer’s jargon of “show, don’t tell” my book shows them, “We’re giving you our very best.  It’s what you deserve.”   It is also designed to last and to be treasured.

What a startling number of eyeballs for a single manuscript! Thanks for sharing this with us.

I'm curious about Far East. Why are so many books printed there, and not in the US? And where are issues like paper quality determined? I appreciate that costs have to be kept under control to keep books affordable. Are those decisions made at a corporate level?