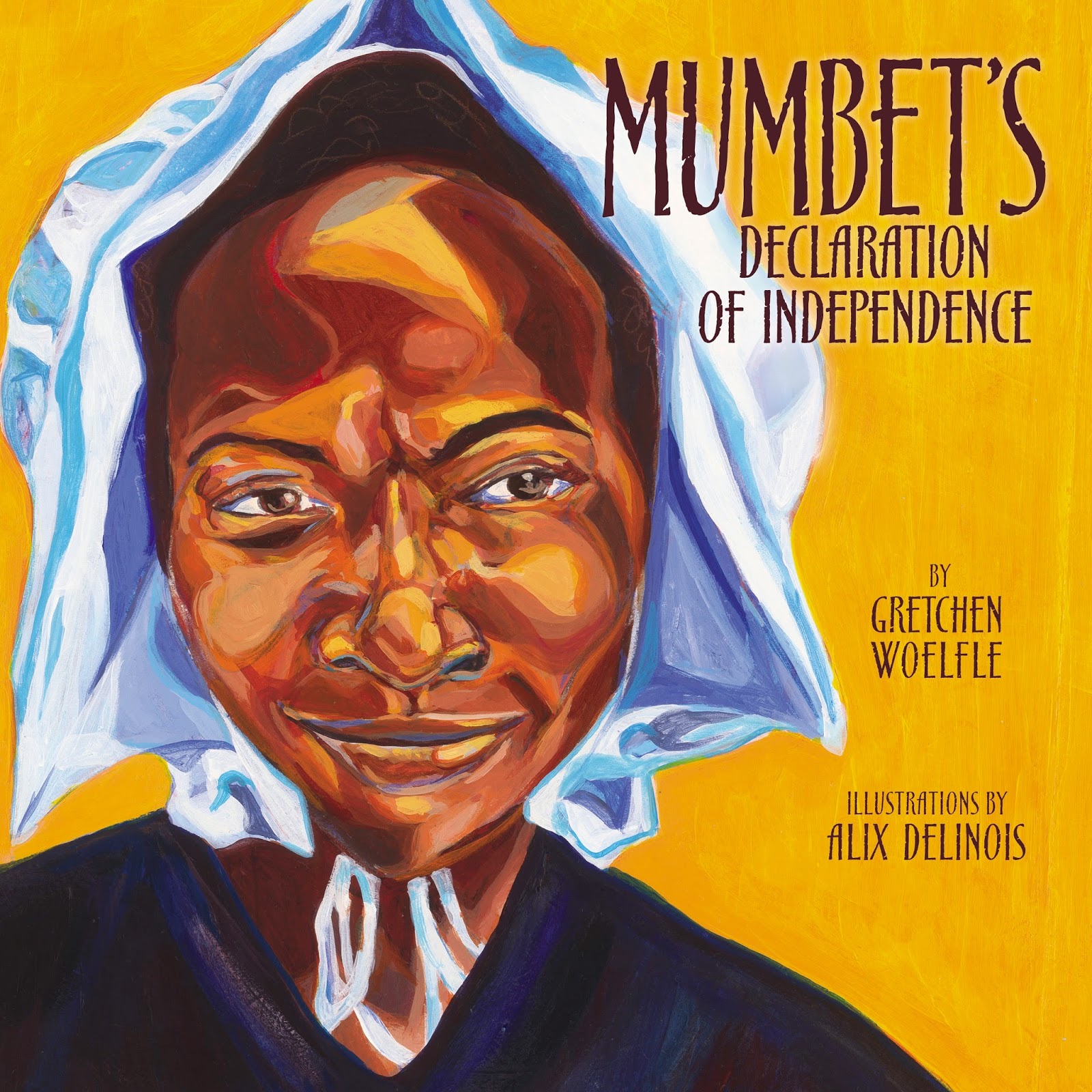 My latest book, Mumbet’sDeclaration of Independence, comes out on February 1.  I’m always happy on pub dates, but this one feels especially good (thanks, PW) not least because of the book’s spectacular illustrations by Alix Delinois. He lives in New York, has done since he was seven. But he was born in Haiti, and Caribbean light and color shine all through the book and perfectly reflect the tone I tried to express in the text. I’m going to interview him for my February blog, so I won’t gush on now. 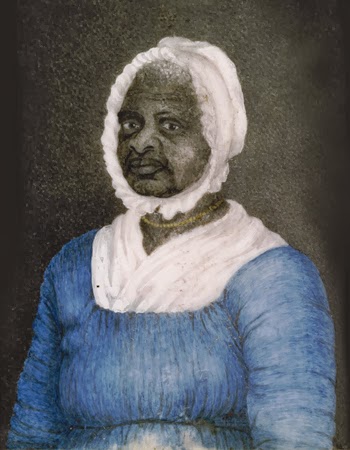 I love writing about little-known people and I’m pleased that editors are publishing books about them. Every season sees more new heroes and heroines lining the lists. As for Elizabeth “Mumbet” Freeman, I discovered her while researching Write on, Mercy! The Secret Life of Mercy Otis Warren.  Not for the first time, research for one book led to the next one.  Both Mercy (white and well-educated) and Mumbet (an illiterate slave) lived in Massachusetts during the American Revolution – Mercy in Plymouth, Mumbet in the Berkshires.  Both used revolutionary fervor to advance their causes: Mercy, to write and publish her political views; Mumbet, to sue for her freedom. (This is a portrait painted on ivory, of Mumbet in old age. It's in the Massachusetts Historical Society in Boston.) 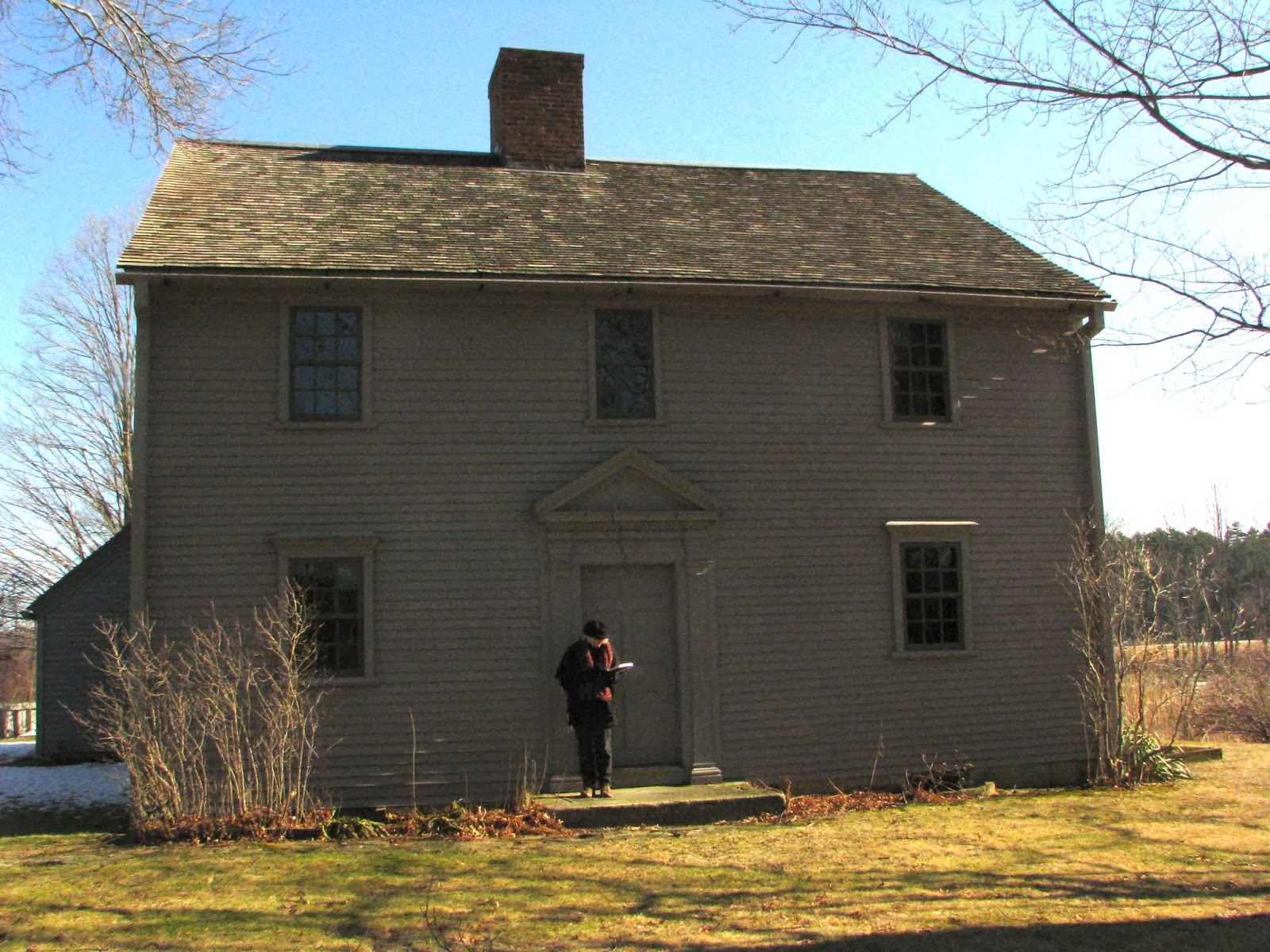 I try to bond with my subjects, and that often happens when I travel to their home territory.  This was true with Mumbet. ‘Twas a frigid day of January that I was given a “Mumbet tour” in Sheffield and Stockbridge, Massachusetts by historian Barbara Dowling, then working for the Trustees of Reservations, the conversation group that owns Ashley House, where Mumbet spent her slave years. The house was closed for winter – it being colder indoors than out! – but Barbara opened it for me to poke around, searching for traces of Mumbet’s life there. 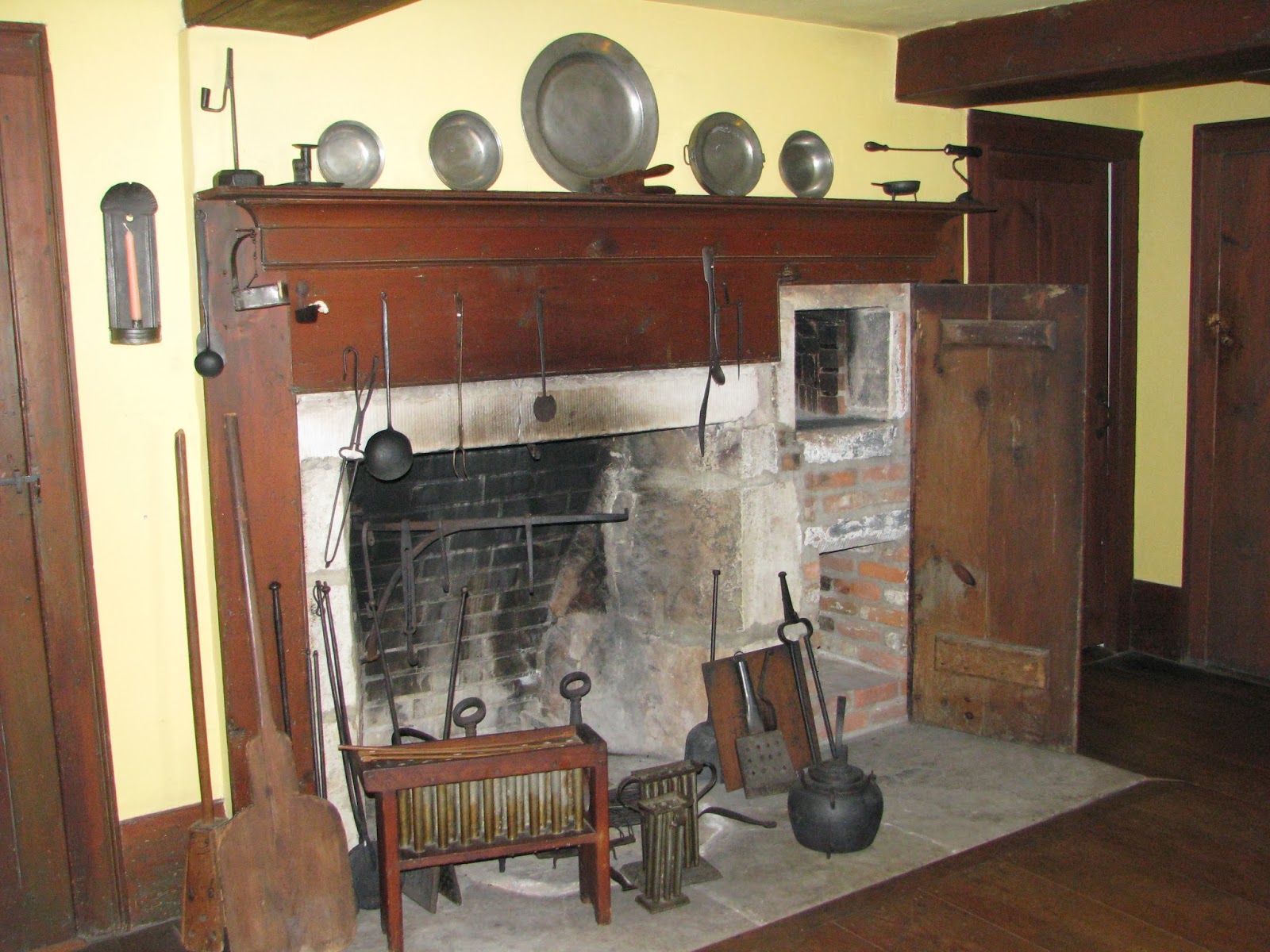 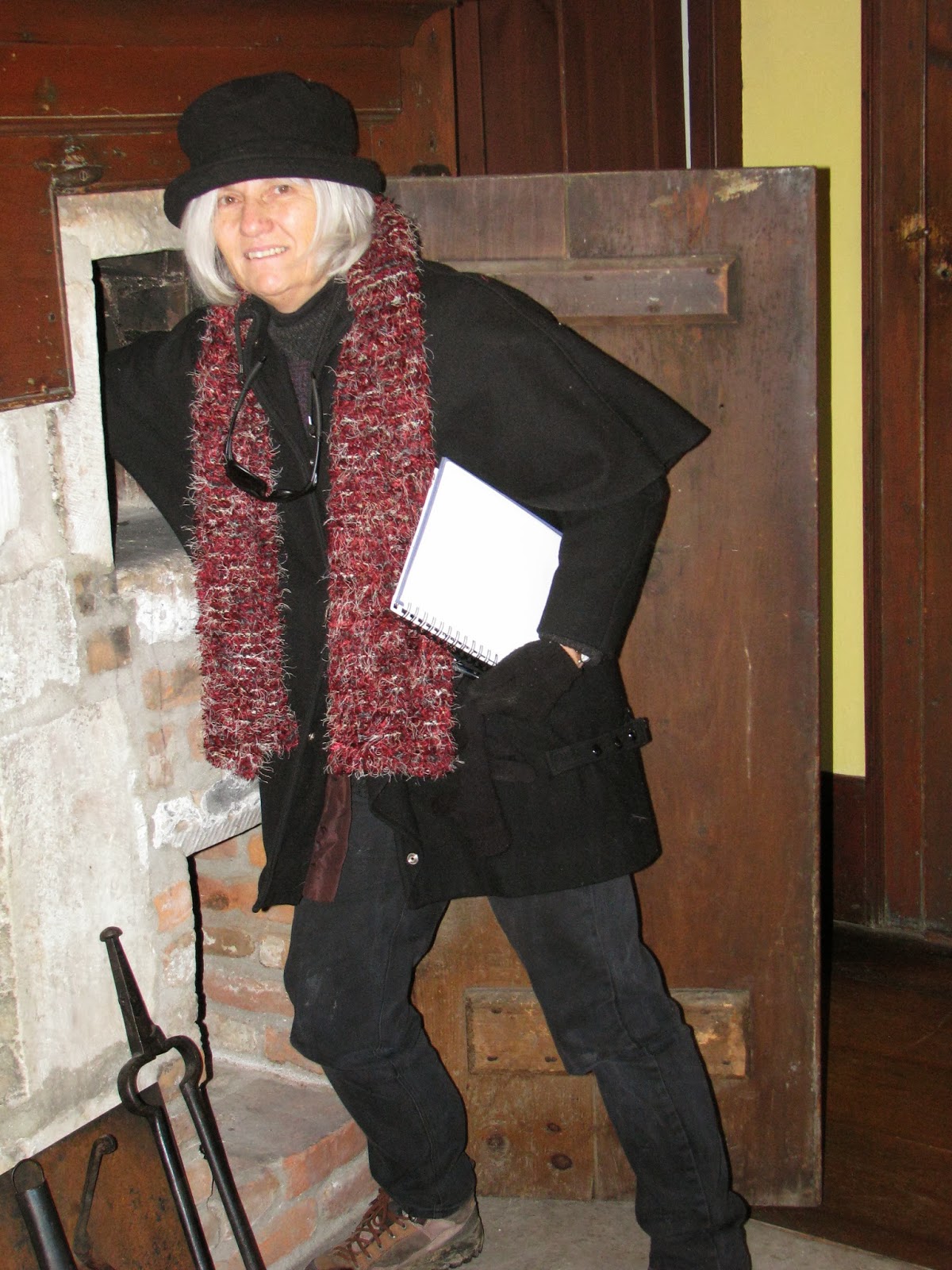 It's a comfortable, not grand, house, with a big hearth where Mumbet worked. I peeked up the chimney, stuck my arm into the baking oven, gazed into the small room off the kitchen when she probably slept. I climbed the narrow stairs that she climbed carrying refreshments to white men who discussed their fight for political freedom from the British. 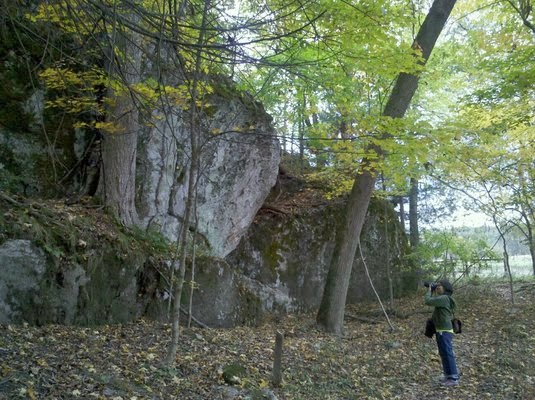 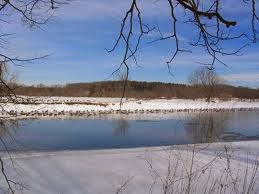 Outdoors, nearby Bartholomew’s Cobble, far-off Berkshire mountains, and the Housatonic River presented themselves as symbols of Mumbet’s strength and courage, and found their way into my book. 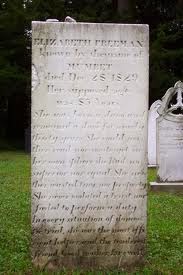 A few miles away sits the imposing Sedgwick estate, home of her lawyer, where Mumbet worked for two decades as housekeeper and second mother to the seven Sedgwick children. She saved enough from her wages to buy a small farm in the hills outside Stockbridge, and retired there to live with her daughter, grandchildren, and great-grandchildren. The house is gone, but I envisioned her, looking out over the Housatonic Valley that held a life's worth of memories. Her grave includes this epitaph written by Catharine Sedgwick, one of Mumbet’s charges:

She was born a slave and remained a slave for nearly thirty years.
She could neither read nor write yet in her own sphere she had no superior or equal. She neither wasted time nor property.
She never violated a trust nor failed to perform a duty.
In every situation of domestic trial,
she was the most efficient help, and the tenderest friend.
Good mother, farewell.

I ended Mumbet’s Declaration of Independence just after she sued her owner and [Spoiler Alert!] won her freedom. But she lived long after that, and her life led to me other African Americans of that era, and another book about worthy and under-reported lives. I included Mumbet’s later adventures there, but you’ll have to wait until 2015 to read those.

In the meantime, tune in next month to meet Alix Delinois, who also traveled to the Berkshires to bring Mumbet into view. 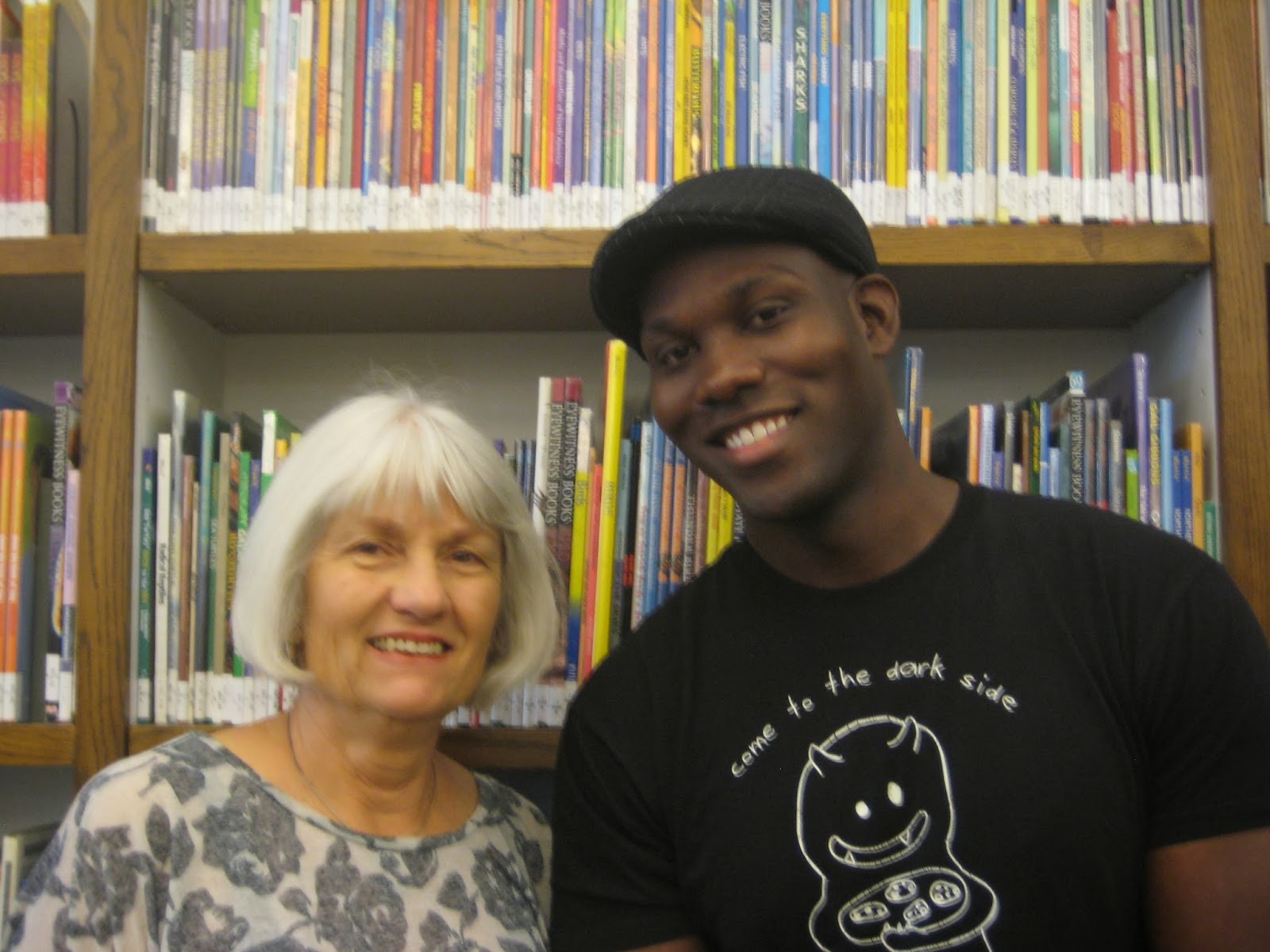 What a wonderful post on a great subject. The back story and photos give us an added glimpse. Congratulations!!!

Congratulations, Gretchen! This sounds like a wonderful story, and I can't wait to read it. What a gorgeous cover!

This sounds - and looks - fantastic! I agree, it's so great to learn stories about people we'd never heard of before.

Congratulations Gretchen! I just returned from the film, Twelve Years A Slave. It is an important much-needed step towards truth and reconciliation. Mumbet's Declaration of Independence is another step in the long road of understanding. Thank you for writing it. Can't wait to read it.

Terrific post, Gretchen! I love the pictures of you inside Mumbet's house--even in the freezing cold--and imagining her life there. And I also love the picture of you and Alix. I can't wait to read your February interview with him.
(Caroline)

How neat you could go to Mumbet's home and try to experience her memories and the setting. I like how your research leads you to other fascinating people to write about!

Thanks so much for sharing the "story behind the story," Gretchen. And congratulations on another new book!

Great post! Your excitement of discovery shines through. And the photos, interior and exterior, bring us even closer to a rugged life in a beautiful place. Thanks for bringing us Mumbet, Gretchen!