A month ago, November 13, April Pulley Sayre wrote a post about photographing nature, Common Core and Nonfiction Photography Part I. (Part II was posted December 11.) As another photographer-INKer, I’d like to continue the discussion by writing about photographing dancers. Capturing dance is much like photographing nature. Every part of the dancer's body must be, as April wrote, “clear and complete.” This is especially true when it comes to the very strict and formal lines in ballet. The shapes dancers make must be perfect, as defined by balletic rules. If even one finger is not in the correct position, the photograph is useless. Formal lines and movement have a little wiggle room, but that is usually the choreographer's domain. As examples, I will use photographs taken for the book, Beautiful Ballerina, by Marilyn Nelson. In order to illustrate dance books I follow the 1-2-3 Rule:
1.  Perfect ballet form
2. Recreate the choreographer’s vision or style
3. Visually express the meaning behind the writer’s words.
You won’t find these rules on Google. I just made them up. But this is pretty much what’s involved. As you might imagine a heap of dance images end up under the delete button. Here’s an example: 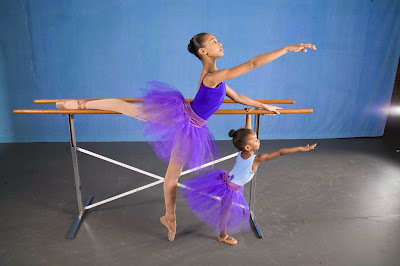 Notice the ballerina’s foot resting on the barre. Wrong. The foot must be slightly elevated. Although I loved the emotional connection captured in the photograph, it would never pass the choreographer’s veto power. Here’s the image reshot with a correct line. 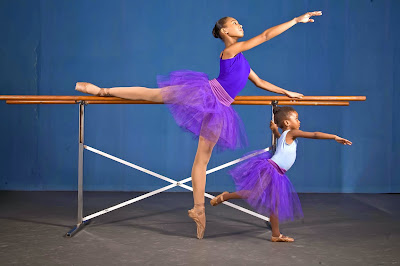 [The little ballerina gets a free pass because she’s only four.] This image ended up in the B list  – I didn’t have the heart to delete the two entirely – because the two dancers at the barre didn’t fit Marilyn’s words, rule 3.

HOW PHOTOSHOP CHANGED IT All - & Opened a Can of Worms
Fortunately, today’s technology gives photographers some space to make mistakes. For this book I used large, white, diffusion screens and strong strobes to capture dancers in motion. While going for the dancer, the background often turned into an angular mess that overwhelmed the picture. With the help of PhotoShop, I got rid of the distracting background elements. Here’s what the original photograph looked like. 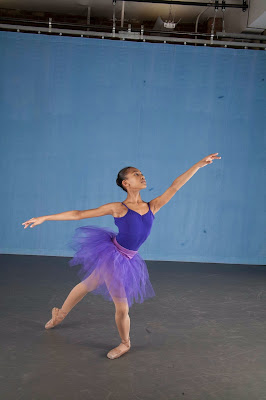 Here’s what was sent to the art director. 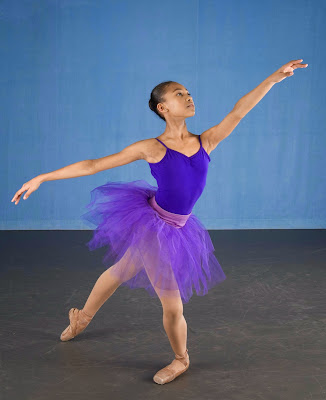 So here's the question ... Is a retouched, cropped, straightened photograph fact or fiction?
As a budding photographer I would practically have a nervous breakdown if anyone cropped or tinkered with my black and white photographs. Now I’ve come to appreciate the fact that technology can help make images more real.
The curtain in the photograph above had splotches on it. Can you see them? They look huge enlarged in the computer. If I kept them in, they would be a distraction. So out they went. In order to show the entire body of the dancer I sometimes ended up with slanted curtain tops. By taking the dancer out of her environment via layers in PhotoShop, I was able to get rid of the angled spotted curtain and keep the focus on her. Is it still real? More real?
In the middle of shooting the book one of the dancers arrived with a small canker sore on her lip. It was hardly noticeable. But under powerful lights, and a camera that records every little pore, it looked enormous. Out, damned spot! Out, I say! [I just saw Macbeth at Lincoln Center.] The book was about ballet, not pimples. I PhotoShopped it out. Then I decided to get rid of the curtain and slightly change the background colors. Does that mean the image is less true than had I left it in? 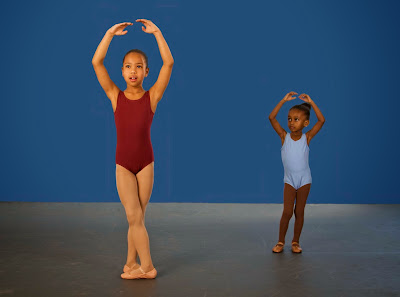 Like research and writing, photography includes choices. What to leave in/take out?  We make choices while creating narratives, building arcs, and describing a subject. I don’t know about you, but when I do an interview, the subject usually has repeat quirk words such as, “you know,” “okay,” “right.”  Right? I once counted seven “likes” in one transcribed sentence. Leaving in those involuntary quirks detracts from the read. The quirk then becomes the subject rather than what the person is saying, or who the person is. Sometimes I leave one or two “you knows” or “likes” scattered throughout a chapter for flavor. Just like sometimes I leave in a small pimple or two. But I take out blemishes, visual and syntactic, because I don’t want the distraction.
Another element when photographing dancers is rule 2. The image must, must, must reflect the choreographer's unique vision. Arthur Mitchell, the founder of Dance Theater of Harlem, where the book was shot, insists that his dancers have perfect, classic, balletic lines. His view is what makes this book distinct from other dance books I've done in the past.
One more thing ... rule 4. After all three rules are met, the photograph must also represent the vision of the photographer. For me dance is not just about body and form. I want to show the emotion, the individual je ne sais quoi, that turns dancers into artists. Adding to the emotional content is historical context in at least one image per book. No one notices this but that's okay. Arthur Mitchell became famous as a lead dancer for George Balanchine’s New York City Ballet. As homage to Mr. B, the first photograph in the book had to be a ballet shape that he created. 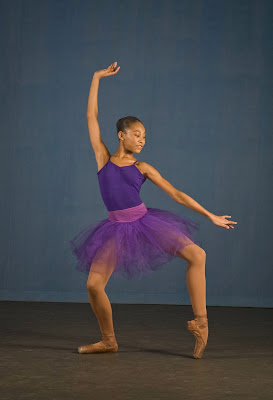 Next February, I plan to write about photographing people for my new book, Beyond Magenta: Transgender Teens Speak Out.
Happy holidays everyone. May we dance into a beautiful New Year.

I found this fascinating, Susan. Making "documentary" photographs (if that is a decent term) is so much like writing nonfiction, isn't it? You create a picture that is true, but in doing so you make choices that shape it so that it is your view of the subject. And yet you also follow very specific rules so that you don't violate the truth-telling. I love listening to artists talk about their process, and with you we get a double --you can tell us as an artist and a writer. Can't wait to read your post about Beyond Magenta!

Susan, thanks for sharing your expertise. I love learning from you and seeing through your eyes. Ballet is an art of such nuance that it takes a skilled photographer to really do it justice. You did! It seems like the way you considered the foot/barre issue is very similar to what we consider in field guide photography: what is the characteristic posture, the best representation for a species. In your case it's not a species but a dance move you are trying to represent. I see why it was hard to set aside that first pic—the emotion in it sings. Loved your comments on retouching, too.

Thanks, Deborah and April, for your warm and generous comments. My years working with various dance companies taught me that dance is a pure art, a truthful art. Dancers use lines and curves to turn complicated ideas into clear, minimal explanations. Isn't that what nonfiction writers do too?