On How Research Can Make You Throw-Up

Being a nonfiction writer is so glamorous! At least that’s what it looks like from reading the jacket flap bios of many nonfiction writers and illustrators.  After all, we’ve trekked with gorillas, dived with seahorses, explored dark caves, and flown up to the Arctic with the Air Force. You might even think that from reading my books and articles. After all, I’ve hung out with rocket scientists at the Jet Propulsion Laboratory, hiked to the summit of Mount St. Helens when it was erupting, visited volcano observatories on Mount Merapi with a team of American and Indonesian volcanologists, and spent sunny days bobbing on the ocean with wave energy engineers.  It IS pretty awesome. Except for when it’s not.

I’m going to tell you a story that you’re not going to find any suggestion of in my book Eruption: Volcanoes and the Science of Saving Lives, just released by Houghton Mifflin Harcourt on June 18. 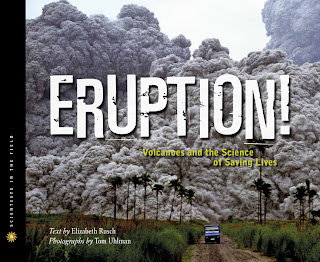 Soon after signing the contract to write this book, I got on the horn to the volcanologists at the Volcano Disaster Assistance Program to see if I could tag along on any summer field work. Volcanologist Andy Lockhart told me that his team was helicoptering a small group of Chilean volcanologists onto the upper flanks of Mount St. Helens to do some maintenance work on a monitoring station and to install a new one. And he invited me to go! “Wow,” I thought. “I have the coolest job EVER.”

After a few days, though, he called me back to say that he was mistaken; government rules would not allow unauthorized personnel on the helicopter.  But he said: If you can find your own ride…

So I called Tom Uhlman, the photographer hired to shoot the book, to see if he would be up for splitting the cost of hiring our own helicopter. He was game, so I priced it out, and we booked it.  I was going to helicopter in to meet some American and Chilean volcanologists on the flanks of freaking Mount St. Helens! “Awesome,” I thought. “I have the coolest job in the WORLD.”

A few days later, the helicopter company called. They were mistaken. There was no way they were going to land their helicopter on an ash field where their delicate components would get ground up by the glasslike slivers of ash.

I was heartbroken. There had to be a way…

So I called Andy. “Is there any way we could hike in and meet you?” I asked.

He didn’t think we could take the usual climbing route because it’s too snow- and ice-covered and we’d need crampons and ice axes. But he thought we might be able to go up and around the glacier.

So I called around and found a volunteer guide. He would carry a radio, a GPS and map.  Tom and I packed our backpacks, hiking boots and hiking polls. We were set.

The hike started out mellow, winding through the woods. We hopped on a trail that circles the volcano and the sun shone brightly, the sky was blue, and the wildflowers were everywhere. I thought: “I really do have the best job in the world…” 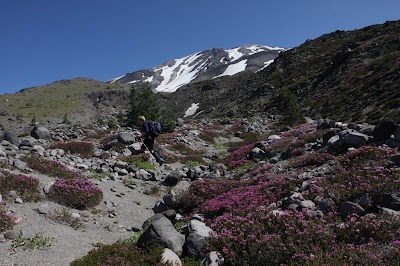 Soon we headed off trail up some steep hills full of loose volcanic scree. We heard a distant helicopter and caught a glimpse of it far off, but we couldn’t tell where it went. 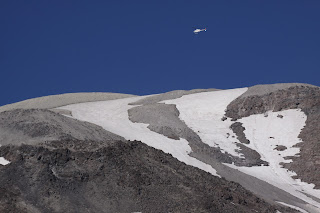 We checked our GPS reading and the map and trudged up canyons and down canyons. We were winded but happy. 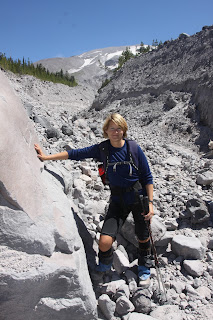 Finally, we found the canyon that we thought would lead us safely to the volcano monitoring station.  We were much later than we thought getting there, but still had many daylight hours ahead of us, so up we went. Up and up and up. Through scree piles that avalanched under our feet. Over large rocks and boulders. And then we faced a huge, steep snow field. The kind where you’d be better off having crampons and ice axes. 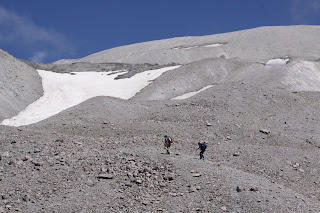 We decided that the guide and I would head up alone, and Tom would stay with his equipment until we were sure we had found the right place. (This is Tom, having a much needed rest.) 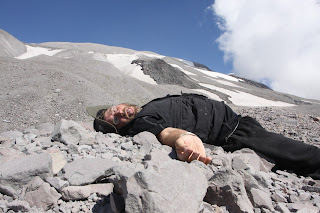 We couldn’t see or hear the helicopter or any voices. But it was still a long way up and over a ridge, so we thought maybe it was all hidden from view.

We trudged up, kicking our toes in to the snow to make shallow steps. Did I mention that I’m a little scare of heights? I just kept my eyes on the snow ahead and tried not to look down.  Then, I lost my footing.  I slipped and started shooting down the ice field, picking up speed. I kicked my heels into the snow and grabbed desperately at the glacier with my hands but I just kept sliding. I was nearing the guide, and I reached out my hand.  In what felt like slow motion, he grabbed my arm and stopped my slide. We both sat in the snow for a while, panting.

He gave me a gentle look. "I don’t hear anything," he said. "I don't think they are up there. Maybe we should head back."

But we had come this far. So we trudged to the top and over the ridge. 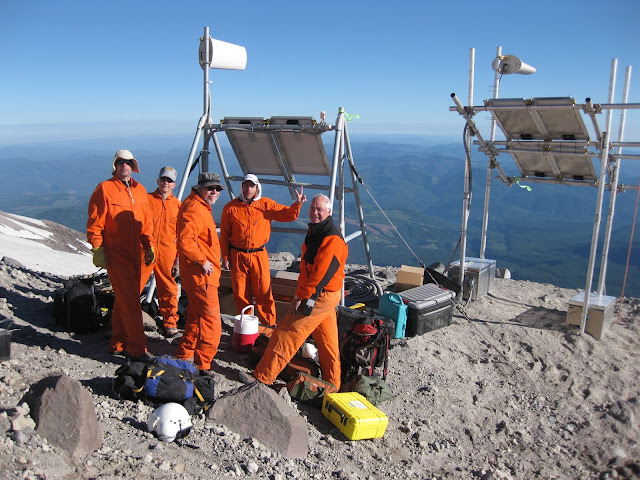 This amazing photo of the America and Chilean scientists working on the volcano monitoring station on Mount St. Helens? I didn’t take it. Neither did Tom, nor the guide.

That’s because we never made it there.

We hiked over the ridge to find nothing. Nothing but a bunch of volcanic rubble.

I actually had a tantrum, stomping my feet up and down, pounding my fists in the air and yelling: “I don’t believe it! Where are they???”  (I was only half joking.)

We estimated that we hiked about 18 miles, with at least 6,000 vertical gain. It was a beautiful day, but I ran out of water long before we got back to the trailhead (and anyone who knows me knows I am a fiend about packing ample water.) We hiked out after dark, tired, hungry, and dehydrated with our legs wobbling from all the vertical (and I run half marathons!)

No one had any energy to drive anywhere. Our guide kindly offered to put us up for the night. We gobbled down some burgers and a beer and stumbled off to bed.

But for me, the ordeal wasn’t over. I woke up in the middle of the night, and I didn’t feel right.  I was surprised to find that my legs felt pretty good as I made my way to the bathroom – but that’s the only part of me that felt good. Let’s just say that I kissed the porcelain god.

I cleaned it all up and crawled back to bed.  I felt a little shaky the next day, but made it back to Portland. An email greeted me when I got home: “Where were you? We had a very successful day and brought you a nice lunch and lots of water.”

And that isn’t the only time I’ve had to struggle to hold down a meal while doing field research. I’m deep in the throes of researching and writing another Scientists in the Field book about wave energy pioneers – engineers on a quest to transform that up and down motion of waves into electricity.

One of my first trips out was a sparkly blue-sky day with only four foot swells. But stuck inside the boat’s cabin peering out the tiny windows, trying to interview a scientist and take notes, the waves felt a lot bigger. After a while everyone on board started to look a little pale and a little uncomfortable. Someone offered motion sickness medicine and a few popped the pills. Others sipped ginger ale. And one person – I’m not saying who and it wasn’t me – threw up off the back of the boat. Several times.

But that’s all in a day’s work.

Care to share any gruesome stories from your research? I dare you.

(Photos courtesy of Tom Uhlman, except the shot at the top, courtesy of USGS scientist Martin LeFevers.)
Posted by Elizabeth Rusch at 6:00 AM

Oh boy, thanks for an opportunity to tell THOSE stories. In the Amazon, I had that my-body-isn't-used-to-these-organisms session in an outhouse watching a huge tarantula in the corner. (Yes, I am a nonfiction writer who knows they aren't really dangerous, but...) Another time in a boat on rocky seas, and every time we set up a shot I'd have to be out of the picture so I'd duck down below next to the stinky oil engine which wasn't a good place to be if you were seasick for the first time in your life.

Cool stories! I guess I'll have to stretch myself beyond researching chewing gum and baseball. I did, however, spend some time with some curious wolves inside an enclosure at a sanctuary while gathering information. Mainly, they were polite except for the one that kept side-pushing and nearly knocking me over. Oh, yes, and I'll be tracking gorillas in Uganda next month.

P.S. I think you mean "scree" instead of "skeet" unless, of course, there was shooting going on up there. ;)

Well, the story didn't make it into the book, but be sure to include it in your school presentation!

You forgot to mention, Liz, that Tom thought he was having a heart attack! :-)

Thanks for your comments, for sharing your research stories -- and for catching my misspelling :)