This week I reached my hit-by-the-bus benchmark for another book. Don’t worry! It’s not what you might think. No, I haven’t become so frustrated with the project to have considered throwing myself in front of a bus. (Although as authors we might feel that way sometimes!)

Instead I’ve reached that golden moment when the book is nearing completion. I’ve made my last revisions, written the final photo captions, tweaked the back matter. This baby is almost done! I say to my friends with great glee, “I could be hit by a bus, and the book would still come out.” The expression may sound a bit melodramatic, but for an author who has spent one-two-three-ten—pick a number—of years working on a project, the relief of knowing the book will “make it” is palpable.

I came up with the hit-by-the-bus benchmark idea many years ago. I was working on one of my early books, With Courage and Cloth, and the process had become endless. I began to worry: Will I ever finish this book?! The more years I worked on it without completing it, the more my anxiety began to rise. What if I never quite make it? What if I get that close to done but something happens to me? The book will never come out, and no one will get to see all the cool photos I found of suffragists picketing at the White House for voting rights or learn about the forgotten story of how they went to jail so that women would earn the right to vote. You get the idea. I became extra careful in my personal life—looking both ways twice before crossing the street, et cetera.

When the book finally reached the phase of printer’s proofs, my relief was palpable. Yes! The bravery of those suffragists would become known to young people (and the grownups in their lives). The ingenuity of Alice Paul—architect of the employment of nonviolent resistance for her cause four decades ahead of the Civil Rights Movement—could be celebrated again.

When the book came out months later, it caught on with readers, and, fortunately, it remains a favorite almost a decade later. Every year I hear from students who are featuring Alice Paul and the National Woman’s Party in History Day competitions. Thanks to the Common Core, the book will remain influential for the foreseeable future, too. Thank goodness I wasn’t hit by a bus in the middle of the project! 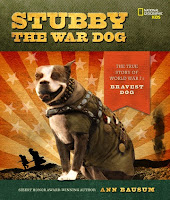 Seven books later I’ve crossed another hit-by-the-bus benchmark. Phew! Now the next book will see the light of day, too, as, I expect, will I.

After all, by now it’s a habit. I always look both ways twice before I cross the street.

Love the cover, Ann. You must have a brilliant designer. Congratulations on the book's near-publication. Me, I keep finding myself chasing the bus as it pulls out of the station. Hopefully, by the end of the summer, I'll be ready to be hit by it, too.