Mongolia!  That's actually where I'm headed this month to ride on camels and horses and to sleep in yurts and to record mysterious throat singers and photograph vanishing cultures before it's too late. So for our first summer rerun of previous blogs, I thought it might be appropriate to send you my most widely read blog ever, the one about ancient maps. Enjoy your travels wherever you go and I hope these maps can start you off in the right direction.

I love maps—not necessarily the GPS versions that send your car straight to the middle of a construction site, but those mysterious ancient illuminated maps decorated with sea monsters, wind gods, ornate compass roses, miniature sailing ships, and oddly shaped lions or camels or kings or headless beasties with faces on their bellies.

I was a kid so many moons ago that our teachers' handouts had all been copied on mimeograph machines. Does anybody here remember those things? If so, you might also remember the bland purple mimeographed maps that were such typical fare, and of course, our homework assignment was to correctly label each city and state and country and river and ocean.

Well as I already said, I was a kid many moons ago, and we didn’t even have a TV to occupy our extra time until I was 12 years old. So during my plentiful spare moments, I used to gather up my Crayolas and spend way too long decorating these boring mimeographed maps by adding row after row of blue waves to an ocean filled with spouting whales, goofy mermaids, and sea bass. If I was really bored, I also added little pine tree forests and purple mountains majesty with snow on top. Drawing the pictures was just for fun; I didn’t exactly color any maps so that I could learn about geography. I don’t know—maybe all that coloring was a nerdy thing to do. But purely by accident, it did help me learn a whole lot more about geography than I would have done any other way.

Fast forward very, very far into the future. Because I get to illustrate the books I write, I still add plenty of maps to my stories from history every chance I get. I've also drawn such things as a cartoon map of America showing about 100 cities with strange names like Truth or Consequences New Mexico and Nag's Head North Carolina and Hoop and Holler Texas and Hog Jaw Alabama. And I've painted funny maps showing everything from tropical rain forest animals to medieval Paris to the modern-day canals of France and Panama and beyond. Besides the fact that maps are a hoot to draw, they're a great learning tool that can help readers find out lots of cool (but often important) stuff without even trying. Here are just a few small examples of my own maps from nonfiction books along with the reasons I drew them: 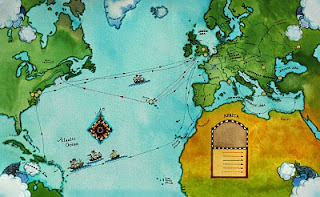 Above is an end paper map showing John Smith's journeys all the way around the world. Bet you didn't know he went to so many places. Maps like this can help put an entire series of historic adventures into perspective. 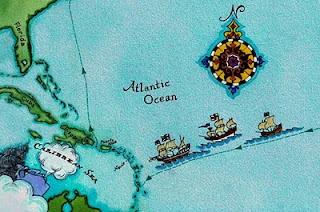 Here's a detail from the same map featuring a compass rose, a wind god, and some of those tiny ships I was telling you about. They're the real ships the colonists used. If the maps are fun to look at, readers might remember what happened as the story unfolds. 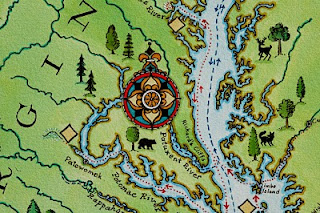 This is a detail of a much bigger map that shows John Smith's exploration of the Chesapeake Bay. It also shows some of the animals he saw along the way. At the beginning of each chapter, I used one of 6 big full-bleed maps like this one in order to show battle locations and pirate attacks and more. 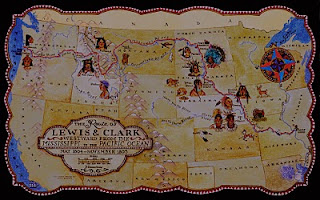 This photo is kinda dark, but it's the end paper map from my book that tells how Lewis and Clark crossed the West. Besides showing the route in both directions, it includes pictures of many Indians the explorers met (wearing the same clothes they would have worn at the time), lots of animals they encountered along the way, and present-day state borders for reference purposes. 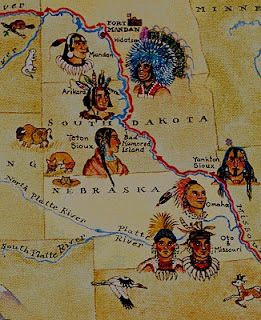 Here's a detail from that map. The red line shows the explorers' path during the westward part of their journey.


So here's my helpful little soapbox idea-of-the-day for any teachers or parents out there who want kids to learn all about geography by accident and have some fun at the same time. Just encourage them to decorate their own maps the coolest way they can. You can even print out a big non-mimeographed map as a guide. The pictures can be funny or purty or informative or all of the above, and if you're so inclined, they can always be part of a history or geography lesson--that's one way to raise their test scores. And be sure to show them some books with amazing maps inside while you're at it.

Vicki Cobb said...
Terrific post, Roz. Hopefully it will get the creative juices flowing in teachers and students. Another thought. You don't have to just map the world's geography anad history. You can draw a map of a room, or a neighborhood, or a garden. Ask kids to draw a map and they'll learn that a map is a representation. A map can be a point of view into many disciplines.
February 1, 2011 8:50 AM

Jim Murphy said...
Roz -- I love maps and love the ones you've posted here. I responded to maps way, way back in time (3rd or 4th grade)because they were visual and the information seemed to stick in my head easily. And Vicki is so right. Map drawing can help kids explore a variety of topics. When our oldest son, Mike, was about to enter a very big and (to him) scary school for 3rd Grade we visited the school and then did a map of its layout so he could 'see' how to navigate the halls.
February 1, 2011 9:33 AM

rebeccahirsch said...
Thanks for this lovely post. I love maps too, and the ones you showed are scrumptious. I'm inspired to sit down with my kids while we ALL draw and decorate maps. Thanks for the great idea!
February 1, 2011 1:19 PM

Forgot to mention that if you click on each picture, all of these maps can be blown up to full screen size. And if you visit the red link near the beginning of this blog, you'll find a very colorful collection of ancient illuminated maps as well. Making illustrated maps is a fun summer vacation project for kids too, whether they're headed for the beach, Mongolia, or even their own back yards.

Bon voyage, Roz! Hope you'll share some photos and adventures when you return.

Enjoy Mongolia. The taiga region in the north is such a contrast to the desert region of the south. Hope you get to see both. It's not an easy place to travel (though getting easier, I imagine), but the hospitality of the steppe is uncompared.