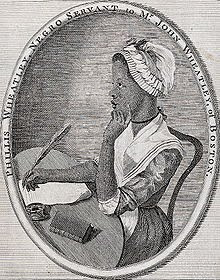 I’ve been writing about Phillis Wheatley, the eighteenth century slave poet from Boston who published her one (and only) book of poems at the age of nineteen. She was the first African American woman, indeed the first African American, to publish a book. She was a celebrity in Boston, and lionized by the aristocracy in London. She met Benjamin Franklin and George Washington, who praised her “great Poetical talents.”

Wheatley was educated by her owners. She also learned the social graces of a proper white girl, became a devout Christian, and remembered virtually nothing of Africa where she was captured and enslaved at age seven. Phillis Wheatley was freed when she was nineteen, but still lived at the Wheatley mansion.

Three weeks after her owner died, she married a bounder who abandoned her and their three babies (who all died in infancy.) Wheatley herself died in a squalid boardinghouse at age thirty. Many children’s biographies have been written about her and most of them focus on her triumphs. But in the world of adult scholarship, things aren’t so rosy. 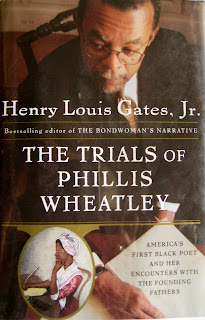 Since her death in 1784, her reputation has waxed and waned. She and her poetry were praised in the sentimental nineteenth century. Twentieth century feminists championed her for writing at all (her poetry is hard to take today,) while black activists vilified her as an early Aunt Jemima. Now, in the twenty-first century I want to tell her story and talk about how history has treated her. Henry Louis Gates, Jr., Harvard scholar and no stranger to controversy, has laid out the territory in his Library of Congress Jefferson lecture, published as The Trials of Phillis Wheatley.

In telling her story I don’t shy away from her best-known, most-anthologized, and most-reviled poem, written when she was but fourteen.

On Being Brought From Africa to America.

‘Twas mercy brought me from my Pagan land,

Taught my benighted soul to understand

Once I redemption neither sought nor knew.

Some view our sable race with scornful eye,

“Their colour is a diabolic die.”

May be refin’d and join th’angelic train.

It’s easy to see why she was called “a colonial handerchief head” and “utterly irrelevant to the identification and liberation of the black man[!].” But I see black pride in this poem too: black and white folks are equal before her God. Her gratitude for the “mercy” of slavery is harder to accept, especially when you look beyond her seat on the sofa in the Wheatley parlor. But hey, she was only fourteen. Later on, she wrote against her literal slavery, and called out her Boston neighbors who used the term as a metaphor.

So, tricky subject with a controversial history makes life for this biographer more complicated than for earlier hagiographical writers who ignored these thorny issues. But it’s more fun too.

Gretchen,
Hello.
Pls be in touch, if you like, at jgaoffice (at) gmail (dot) com.
Essays here hold my attention long after I read them. But I think yours will resonate for two reasons.
I came face to face with original PW material - in Florida of all places & in Tallahassee. Last yr. I met the owners of an extensive trove of material - The Kinsey Collection - during their guided tour of their traveling exhibit. I got goose bumps when I looked into the case at the work of PW
The other reason is that my new picture book bio about an American Indian leader, Betty Mae Tiger Jumper, (title is SHE SANG PROMISE) I dealt with the challenge of the bio. subject going against the grain" such as veering from traditional faith for the Christian faith & also, that subject experiencing an overall positive, formal, residential education, far from the Tribal home.
Many thanks for your blog.
Jan Godown Annino

Gretchen, In writing biographies or profiles of artists, I too often face thorny issues. Some of the artists have led messy lives. e.g. Vincent Van Gogh, Jackson Pollock and Andy Warhol. I don't want to use controversial material for shock value but if it directly affects the artist's work and the book is a YA, I include it. In Action Jackson,which is geared for younger readers, the story follows the making of one great painting. It is about the creative process. We briefly mention his untimely death etc. in the bio at the back of the book. I salute what you are doing. Clearly the issues you're including are very much connected to the poet's work.

Thanks, Jan. I'm a huge fan of your work, especially Action Jackson!