Barbie - Interesting Nonfiction for Kids (of all ages)

This month, Tanya Lee Stone launches her new book, The Good, the Bad, and the Barbie: A Doll’s History and Her Impact on our Culture.  In this month's post, Come on Barbie, Let's Go Party, Tanya shared with I.N.K. the details of her launch party. 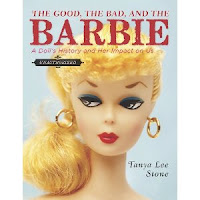 Involved with the toy industry for over 25 years, Barbie has been near and dear to my heart. At Mattel, I originally interviewed for the position of Barbie accessories designer. Finally landing in the Girls Dolls and Plush Department, my office was next to the Barbie designers, who became my good friends.
At first, I was worried that the book was going to be another Barbie bashing or, on the other side of the spectrum, full of Barbie fluff.
After reading The Good, the Bad, and the Barbie, I have to say "Bravo" to Tanya Lee Stone!  The message that stands out to me is that girls can do anything. And, I believe that exact phrase was a Mattel advertising tagline one year. Ruth Handler persevered in so many ways - by making things work when everyone said no, by crushing the stereotypical '50s housewife image, by recognizing the new TV advertising medium, etc.

March of last year, Barbie turned 50 and on my blog I wrote about my own personal love of Barbie. Regarding Barbie's negative stereotype:
Grandma cut off some of her own hair and glued it onto Barbie's private parts. Yup. This is how an adult saw Barbie - a grown-up mature woman. To me, Barbie was years of the best play imaginable. The creation of Barbie's life in my mind was priceless.

The Good, the Bad, and the Barbie is a five-star interesting nonfiction read for girls of all ages. The flow of the book is seamless from the beginnings of Ruth Handler's imagination, through the process of Barbie's rising star.  This includes the impact of the revolution of plastic manufacturing, the embracing of diversity, Barbie as an art form, and, of course, the controversies - peppered with fabulous, thought-provoking quotes from Barbie fans and critics.

As a child, my Barbie play was a treasure-trove of stories and adventures. Barbie's house and town was a mixture of the family couch and lots of blocks and boxes. Barbie's clothes fascinated me - I loved her bright, blue patent leather coat and neon go-go dress. And, as for my self image, my mom told me that I was prettier than all the girls on her soap operas.

Toy and doll history can be used in the classroom to support curriculum in Social Studies, and American and European History. Kids can relate to toys and dolls.  Last November in my Play and Creativity in the Classroom presentation at the Chicago Toy and Game Fair, I shared with teachers how to combine toys and play with social studies, science, and math curriculums. In my I.N.K. post last year, Interesting Nonfiction and Toys, I shared a variety of toy-related nonfiction books.

Last year when my ten-year-old son was having a difficult time picking an appropriate book for his class nonfiction unit, I handed him Toys! Amazing Stories Behind Some Great Inventions by Don Woulffson - now his favorite book.
I say, give them something that they can relate to - and I know most kids can relate to toys... and Barbies.

Speaking of fun...
Have to mention that I was recently asked to act as Consulting Editor for Appleseeds Let's Play Issue. I'm also writing some extremely fun articles for the issue... almost doesn't feel like work.  And, isn't that what it's all about? Having fun with whatever we do?

Thank you Anna! What a small world we are! Who would have thunk it! I was pre Barbie but my doll Priscilla (after my best friend in elementary school) wore clothes made by friends and me (I learned to sew for her). When she fell off the bed and broke her nose, we took her to the doll hospital. One of my favorite books was called "Live Dolls" and I fantasized all day at school about how I'd play when I got home. Thanks for reminding me.

What fun. I didn't play with Barbies as a kid (too busy playing with toy animals) but enjoyed the same world of lost-in-imagination. Those childhood experiences can really fuel your future career, can't they? I ended up co-authoring a book about toy animals with a fellow collector (self published). One book that my mom and I both love is the story of "Hitty: Her First 100 years" (history of a doll, found a used copy online). And who can forget Ramona's "Chevrolet"?