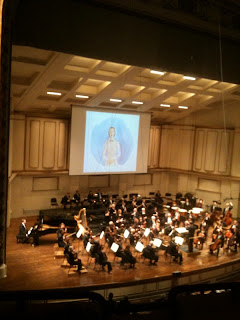 Almost ten years ago I met the writer/illustrator Debra Frasier at a Children’s Literature Festival in Idaho. She told me that one of her greatest moments in her life was narrating her picture book “On the Day You Were Born” accompanied by a full symphony
orchestra. Standing at the podium, hearing the music surrounding her, she said, was an extraordinary experience. I must admit I was a little jealous. I mean I could do that. Stand up there and read one of my books. I could listen to the sound of violins and cellos and flutes washing over me. How wonderful would that be? Alas I hadn’t written a book that would qualify for such a thing. But from time to time I thought about Debra and her story. Remembering it gave me a vicarious thrill.

So you can imagine my excitement when, by chance, I found myself on a plane seated next to David Robinson, the musical director of the St. Louis Symphony Orchestra. Sandra Jordan and I were just finishing the third or fourth draft of Ballet for Martha: Making Appalachian Spring. David and I chatted about the book and the music. He could actually hum the whole score, which Aaron Copland had composed for Martha Graham’s dance first performed in 1944, when America had entered WWII. Isamu Noguchi had designed the sets. It was a great collaboration between choreographer, composer, and artist. I told David we were having trouble describing the last, lingering notes of the music. “They seem to ask ‘What will happen tomorrow?’ ” David said. Yes! I mentioned that I had a vision of the text narrated with illustrations, accompanied by the music. I wanted the book to make a contribution to family concerts, a modern alternative to Peter and the Wolff. I wanted to stand up like Debra and hear the full orchestra playing behind me. (I didn’t tell David that part of it.)

He was enthusiastic about the idea, as one of his interests is showing audiences the way the arts interconnect. Two years from that serendipitous meeting, Ballet for Martha was presented with the St. Louis Symphony performing Appalachian Spring. Brian Floca’s illustrations appeared on an overhead screen. We were all there, Sandra, Brian, and our editor Neal Porter. It was exhilarating! In November there will be four performances for younger audiences of Appalachian Spring, along with the narration and images from Ballet for Martha. I guess you’re wondering if I will be up there narrating. Well, no. David, himself, will read excerpts from the text with the images overhead. The orchestra will play fragments of the music as they relate to the story, followed by the complete symphony. As for me, I’ll be sitting happily in the first row with my grandchildren and humming along. But I’m working on the next performance, which will be in Aspen, Colorado next summer. Maybe that will be my big chance!!!
Posted by Jan Greenberg at 4:23 AM

Jan: What a great way to make your book come alive. Will they record any of the concerts? Wouldn't it be great if something like that made its way onto TV, to rival the other so-called "children's programming." I'd love to see it. Congratulations!

Jan -- What a wonderful tribute to a beautiful book! Mazel tov! My turn to get just a little bit jealous now -- and hope that it will inspire great things. I can't wait to share the book with my dancing granddaughter.

Sue,To video the performance is apparently a complex proposition with unions etc. But a recording of a narration of the text with the music is under consideration. Thank you so much for your very kind words.

Jan - this is wonderful. A clever and unconventional way to promote books, music, and harmony in general.