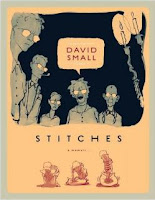 One of the first entries I wrote for this blog was about reading Philip Isaacson’s Round Buildings, Square Buildings, and Buildings that Wiggled like a Fish long ago—how its beauty and complexity blew me away and made me realize that nonfiction for kids could be an art form and I wanted to try writing it. http://inkrethink.blogspot.com/2008/05/book-that-started-it-all-for-me.html

When Stitches was nominated for a National Book Award in the kids category, I figured I should read it. I had read a few graphic novels before, some okay, some very good, but they didn’t change my reading habits much. No aspersions cast, there are many types of books I don’t read much.

Stitches had me at hello. I would love to say it was literary merit alone, but it was actually because Small's first spread had a single word on it—DETROIT. I live in Boston now, but come from Detroit and have very strong feelings about it.

His second spread had a panel with a row of postwar houses built for returning GIs—one of them looked exactly my childhood house. As subsequent panels slowly drew us toward and inside his home, I noticed his address was 19458. Mine was 18073. As a nonfiction writer, it didn’t take long for me to find out that Small had lived on Pinehurst, not my street, Sorrento. Nevertheless, the hook was set.

It was Small’s story and how he told it that reeled me in, though. Especially that amazing interplay between word and image, where pictures are telling the story, then language carries the narrative baton for a little while, only to pass it off to an image where emotion and action are so perfectly aligned that it takes you someplace else entirely. I was trying to explain this to a friend and she said, “Like a picture is worth a thousand words, basically?” “No,” I answered. “Like the picture does something no words could do.” Examples in this book—pp 62-63, 174, and 250 for starters.

This is not a new insight. Millions (multi-millions) have always known it and I guess I did to. But there’s a difference between knowing something and feeling the one-two punch of its impact, especially within the context of a story. Thank you, David Small, for whacking me over the head.
Posted by Susan E. Goodman at 7:30 AM

Glad to hear you enjoyed Stitches. I reviewed it on my blog in Sept 2009.

I feel this is book for adults. I'm surprised it was nominated as a children's book.

For example the comic strip that was later published as Diary of a Wimpy Kid was written by an adult for adults and published in an adult publication. Later the publisher wanted it in book format for kids. Now it's going to be a kid's movie.

Oddly The Far Side is classified by publishers as comics for adults but many kids love them. Go figure. I don't get it.