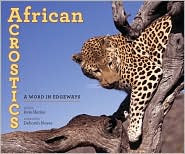 I am fortunate to serve as the poetry coordinator for the CYBILS awards, and in 2009 I was doubly fortunate because I was also on the nominating panel. This meant I got to read all of the eligible books that were nominated in the poetry category. Among my favorites was a wonderful book by poet Avis Harley, which was "illustrated" with wildlife photographs taken by Deborah Noyes, entitled AFRICAN ACROSTICS: A Word in Edgeways.

In addition to providing spectacular photographs of African wildlife including elephants, hippos, crocodiles, giraffes, zebras, impalas and more, the poems include factual information about the animals, all in the form of acrostic poems - a form known by many teachers and children, and one that usually results in rather simplistic poems. Not so with Harley's work - she takes acrostics to a whole new level of clever.

To write an acrostic, you take a word (or phrase) and write it down the left-hand side of the page, then you start each line with the applicable letter. In the case of the poem entitled "A Croc Acrostic", the acrostic is the name of the profiled animal: "CROCODILE". Harley, however, got creative with other animals. The poem about the rhinoceros is not a 10-line poem based on the animal's name. Rather, it is a 16-line poem based on the acrostic "BEAUTY IN THE BEAST".

In huge hide shoes,
Nobody argues

This is a colossal
Holdover from
Earth's primeval swamp.

But
Even so, I know
A rhino when I
See one, and this is the time not
To.

The book includes fabulous back matter, including an explanation of what an acrostic is and how to write one as well as short, factual paragraphs on each of the species profiled in the book. A must-have for libraries, poetry lovers, and animal lovers - particularly those interested in the wildlife of Africa.
Posted by Anonymous at 2:36 AM