Let's Hear It for Library Volunteers! 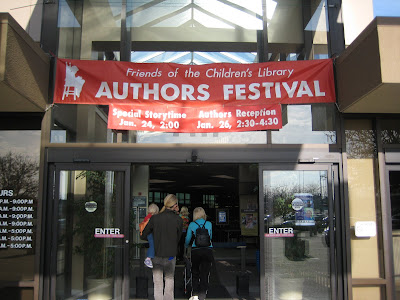 Twenty-three years ago, Huntington Beach, California held their first Children’s Authors Festival. I didn’t join the party until about ten years ago, but it’s one I look forward to each year at the end of January. It always takes place during the week of my birthday – which I gleefully announce – so I revel in a couple hundred kids singing to me and other January and February birthday kids.

The festival, which sent 39 authors to 21 schools yesterday, reaches 16,000 students a year. It’s organized by the Friends of the Children’s Library in Huntington Beach, an oceanside town in Orange County, south of Los Angeles. This library is to die for: a huge two-story light-filled building with a luscious aquarium in the lobby and a volunteer bookstore that brings in $15,000 a month. (My neighborhood cash-strapped branch of LAPL is another story….) 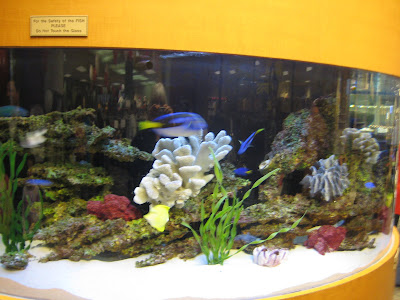 The Authors Festival serves HB and parts of two less affluent towns, so we authors visit schools across a wide economic stratum. Sometimes I sell several dozen books at the school, sometimes barely any. But that’s not the point. One year I arrived to a red carpet laid out as the kindergartners greeted me with a big banner. I burst into tears. This year I had four handlers to carry my stuff, show me around the cool open plan school, and best of all -- give me a tour of their one acre farm complete with pigs, goats, sheep, geese, chickens, and rabbits!

Festival planning begins in May when one volunteer writes to elementary and middle schools – do they want one or two authors and illustrators, for lower or upper grades? In July another intrepid volunteer, Gail Page, applies for a grant from the Boeing Employee Community Fund, which has contributed $5000 for several years now. Come August, Gail contacts her authors. We send her a short bio and information on our presentations and books. The procrastinators get a nudge in October. Then in November school reps converge on the library to draw author names from a fishbowl. A bit of brokering goes on as trades are made, and in December authors and schools connect to coordinate the event.

Meanwhile the Friends of the Library are hard at work. With the Boeing grant money they buy authors’ books for the school libraries to prepare for their presenter; they organize a students’ writing and illustrating contest with $1000 worth of prizes, and they arrange for an after-school reception at the town library.

Posters, balloons, and a Barnes and Noble bookseller greet you in the library lobby. Each author displays his/her wares on a table to meet and greet the public – hundreds of children and parents from the four school districts served by the library. About forty intrepid Library Friends show up to make this all happen. We authors schmooze with each other, kids meet “their author” and many more, books are bought and signed, and contest winners receive their awards.

When it’s all over, the library volunteers sift through evaluations from the schools to determine which authors will be invited back. Authors also evaluate the event to help the coordinators improve logistics. Then, a couple of months later, it’s time to begin work on next year’s Children’s Author Festival.

Honorariums for the day are low. Schools pay $150 and the Friends add another $50. Some authors don’t participate for this reason, and I accept their decision. But for me, it’s a day to celebrate schools and books, my fellow authors, indefatigable school and community volunteers, and my birthday. I say good job, well done, Huntington Beach.