The art of adventure

My adventures lately have been solely of the artistic kind...I have barely left the house for weeks because of an imminent deadline, so the process of illustration has been on my mind. People in my life are initially astonished to witness the effort that goes into creating the artwork for books, since the average reader usually only sees the final printed results. The piles of sketches and reference books, the frantic online searches, and the weeks and months that it takes are not obvious to the casual onlooker. To help explore this topic, a few of my colleagues at the Picture Book Artists Association have been kind enough to share some behind-the-scenes information about their books. 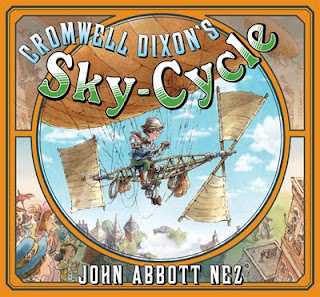 What could be more daring than flying in your own homemade flying machine? Cromwell Dixon’s Sky Cycle tells the amazing true story of America’s forgotten ‘Boy Aeronaut’, who built and flew his own flying bicycle over the skyscrapers of Columbus, Ohio in 1907. I’ve certainly never heard of his story, have you?
By chance, author-illustrator John Nez came across an old photograph in the library and was inspired to track down the story. He found newspaper and magazine articles about the early aeronauts who tinkered together machines and tried to fly them. The book has several illustrations that feature inventions the teenage Dixon built in his workshop. Throughout, the artwork is full of period details.
John’s favorite part of making a book is drawing the first rough sketches, when the possibilities seem infinite. The art was created with real paints plus his computer. The blog for the book has an animation that shows an illustration in stages— scroll down to see The Great Airship Races artwork come to life before your eyes. He hopes that this book "...might encourage today’s children to get out from behind their computers and go build something in their backyards.” 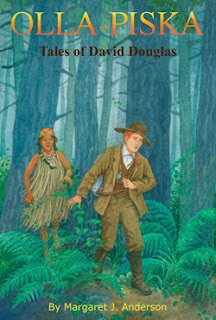 Olla-piska: Tales of David Douglas is a historical novel written by Margaret J. Anderson and illustrated by Ellen Beier. It’s based on the journal of botanist David Douglas, who explored the Pacific Northwest early in the 19th century and lent his name to the Douglas fir.
To design the jacket Ellen first read the manuscript, which she found to be captivating. She searched online for images of Douglas to capture his likeness and find the appropriate clothes and tools. The author provided her with images of the grass clothing worn by the local Chinook inhabitants. A visiting photographer took photos of the wooded landscape that Ellen included in the painting.
Inquiring minds may like to know that Olla-piska is the Chinook nickname for Douglas. It means “fire,” and refers to his practice of lighting a pipe with a magnifying glass using the sun’s rays. Ellen adds that the author has been in consultation about a movie about Douglas to be shown on PBS. 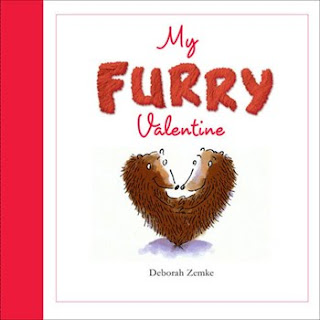 Do you know anyone who is embarking on an adventure of the heart? My Furry Valentine, written and illustrated by Deborah Zemke might give just the lighthearted inspiration they need. In whimsical verse, a variety of animals say “Be My Valentine” in their own way, such as a pack of wolves howling at the moon.
To create this and related titles Deborah says, “I doodle, write, scribble, make lists of creatures and their different attributes, take walks, look at books about animals, plants, and nature, talk to my dog, think about aspects of the theme (e.g. what creatures would work with flowers, chocolates, looking deeply into each other’s eyes, etc.)“ She worked on the ideas visually and verbally at the same time and enjoyed being playful during the process. With 25 or so ideas, she looked for a potential beginning and end, put the other ideas in order (sadly removing a few), and worked on the rhyme. In addition to the illustrator’s typical task of arranging the images and words on the pages, she designed the die-cuts and flaps that would appear in the book. She drew the line work, scanned it into her computer, then digitally painted the final artwork. 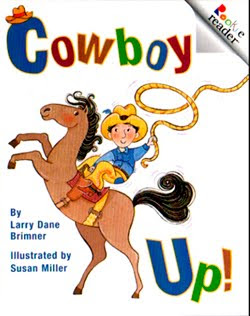 Very young readers will enjoy Cowboy Up! by Larry Dane Brimner, illustrated by Susan Miller. The simple story of a day at the rodeo allowed Susan to “fill in the spaces with my illustrations.” Because she grew up in Connecticut she had little direct experience with rodeos. So a visit to the local library provided short films as well as many books on the topic. She incorporated Western clothing, motifs, and colors into the book to create a fun adventure for the youngest readers.
More artistic escapades will be forthcoming in future posts. Happy New Year, everyone!
Posted by Unknown at 2:00 AM

Cromwell Dixon's Sky Cycle looks wonderful. I'll have to get a copy of that one. Thanks for the reviews. :-)