Sometimes the Truth Finds You

Another installment in this month’s theme, “Searching for the Truth”

One thing about truth—sometimes you search for it and sometimes it just finds you.

Once I was in line for a movie behind an eight-year-old girl and her mom. The girl was spitting mad, declaring every which way that she was never going to talk to Allison again. The mom and I glanced at each other with a suppressed smile. At that moment that little girl truly believed her friendship was over. It was her reality. But we adults both knew those two would be BFFs again the next day, giggling at the lunch table.

I don’t know about Mom but I wasn’t laughing at the kid. I was thinking that this shortsighted sense that “what is now always will be” is part of the human condition. I thought I’d never wear pink. That New Orleans was “The Big Easy.” That there would always be icebergs in the Arctic. Millions of people have walked down the aisle and promised to love each other forever—and meant it.

“Now is not forever” is a really important truth, but an abstract one. The old parental proclamation, “things will get better,” never reassures or gets to the heart of the matter. I wondered how you do get to the heart of it without pontificating.

That’s how my book, On This Spot, was born. It begins with a spread of skyscrapers and rooftops and the words, “This is New York City.” The next spread talks what a big and vibrant city New York is and then in the lower left corner, the words “but on this spot…,” the soon-to-be refrain starts the tale. Turn the page and it says, “175 years ago…New York was a different city,” and then talks about a place where chickens were raised in backyards. 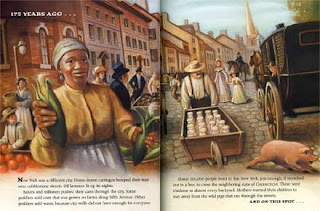 With each spread, the spot that is now New York City transforms—becoming a home to Native American and cougars, then wooly mammoths, then glaciers a mile thick, then dinosaurs, then the highest mountain range ever, then a tropical sea, drifting back to the beginning of geologic time.

As many people reading this blog know, picture books are most often 32 pages. By the time that I had gotten back to New York As Rock, I had used up about three-quarters of book’s space allotment. And it was only then, in the second to last spread when I (mentally) turned to that little girl at the movies and answered her by writing, “Things change.”

Was she ever going to read that book? Of course, not. Will most kids who do read the book think beyond the wow factor and the fact that there were dinosaurs in lower Manhattan? No. But I wrote the thing hoping that some kid would read the story—and it would open the door, even unconsciously, to that truth that I found so important to tell.

Sounds like a beautiful book with deeper meaning threading through it. I think lots of kids will pick up on your more subtle and important message, too.
April Pulley sayre

oh my gosh
oh my GOSH - I've got to have that book on my shelf. I adore that concept: [don't like the reality all so much] where we are was not always so.
as you are so once was i /as I am so you shall be
this highway was a 2-lane blacktop was a gravel road was a wagon path was a narrow trail was a...

man oh man. things change - might as well hold on & see what's next.